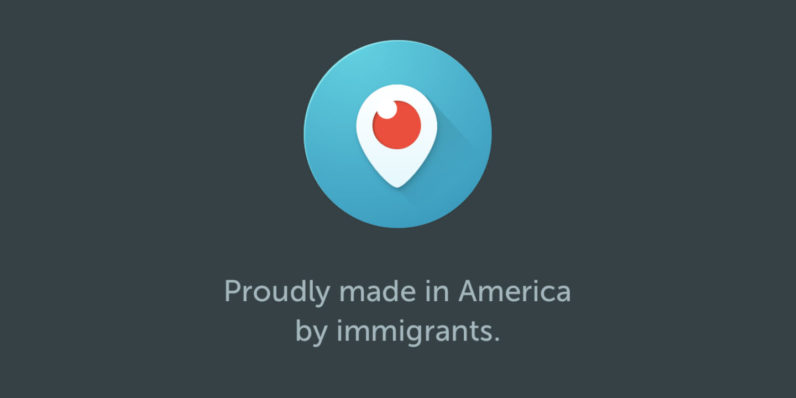 President Trump’s recent executive order on immigrants and refugees has led to a sharp kickback by several tech companies. Now livestreaming app Periscope is adding its own voice to the chorus of criticism.

The app’s loading screen now features a stamp on the bottom that reads ‘Proudly made in America by immigrants.’ And in case you had any doubts its timing has anything to do with the recent executive order, Periscope put out a blog post criticizing the move (emphasis Periscope’s):

The recent executive order to halt immigration from seven countries in the Middle East and Africa has forced us to consider a disturbing alternate reality in which the Periscope team is irreparably changed.

Periscope is built, maintained, and operated by people from many faiths and countries. Without immigrants and refugees, Periscope would not exist. For this reason, we are updating the Periscope loading screen to make a simple true statement: “Proudly made in America by immigrants.”

We feel this is an important statement to make about who we are and the real impact of these policies.

Even so, the company says it “fundamentally believes in maintaining an impartial product,” and that it will remain a safe environment regardless of your political or religious views.

The tag is only visible for a second or two, depending on how quickly the app loads on your device. Periscope is owned by Twitter, which has independently condemned Trump’s order via – of course – a tweet:

Twitter is built by immigrants of all religions. We stand for and with them, always.

The company’s CEO and Co-Founder Jack Dorsey also addressed the order himself:

The Executive Order's humanitarian and economic impact is real and upsetting. We benefit from what refugees and immigrants bring to the U.S. https://t.co/HdwVGzIECt

The tech industry has embraced globalization, making immigration blocks felt widely. According to Bloomberg, Google went so far as to recall some of affected by the order, who happened to be outside of the US when the order was issued. We wouldn’t be surprised to see the same happen at other companies.