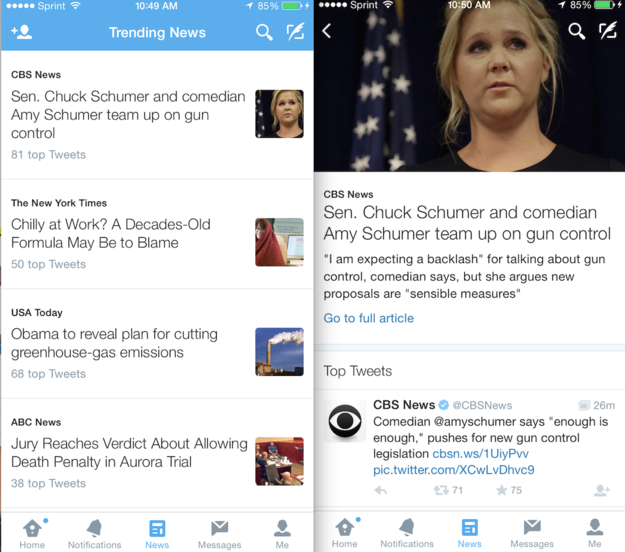 Twitter is always experimenting with new features, A/B testing across the world to figure out the next experience on the platform. It seems that one of those experiments is a special News Tab, according to a report by BuzzFeed.

The tab, which sits on the navigation bar of the Twitter app, has already rolled out to users in Japan. It provides a list of headlines from Twitter-approved publishers, designed to help people get the news of the day quickly and easily. The tab appears to be a more content-driven version of the app’s old “Discover” tab, which was discontinued on the mobile app in April.

Founder and interim CEO Jack Dorsey pulled no punches at the company’s earnings call for the second quarter of 2015 last week, saying that he that product initiatives haven’t seen the audience growth and participation the company was hoping for. He also criticized the perceived high barrier of entry into Twitter, and made strong overtures to indicate that the reverse-chronological feed we know right now might not be in Twitter’s future.

@viticci I have a new news tab in Twitter.app pic.twitter.com/uFPg2xLSV4

The News Tab could become a smart start for users who are new to Twitter, as well as the still-unreleased Project Lightning, which incorporates curated tweets by real humans.

Whether or not the News Tab is blazing the trail for other non-chronological iterations of Twitter, it’s clear that confidence in the company is waning. Today, Twitter stock dropped to an all-time low of $28.69 due to sustained uneasiness over the company’s slow user growth.

Read Next: Twitter: A Google-owned company – How and why it would work