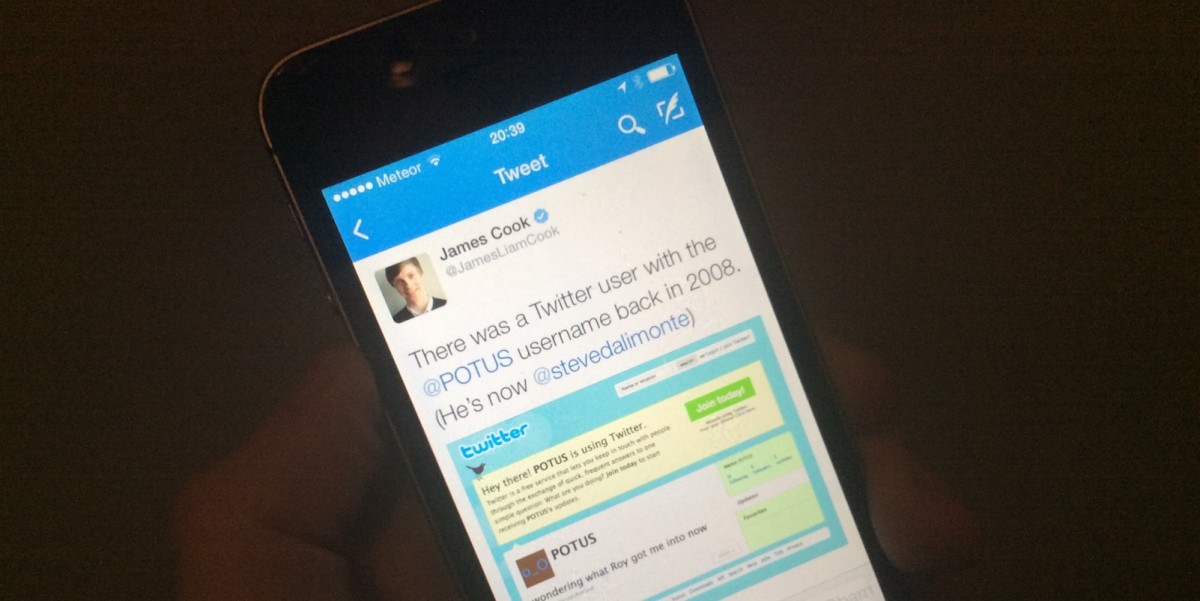 President Obama began tweeting as @POTUS today, but he’s not the first person to use that name on Twitter.

There was a Twitter user with the @POTUS username back in 2008. (He’s now @stevedalimonte) pic.twitter.com/pipb9DUu8G

And Steve confirmed it:

It's true @JamesLiamCook I was the original @POTUS

You're welcome for the handle @POTUS. I accept green cards as thank you gifts.

I dropped him a line to find out the story of how he became Twitter’s POTUS and let it slip through his fingers. He explained:

The story is that back in 2008 when I was living in Toronto, a friend of mine (Roy) told me about this new social media site Twitter. Obviously I had no idea what would become of the social network, so signed up without giving it too much thought. I was pretty big into the show ‘The West Wing’ at the time, hence the name POTUS.

Fast forward to 2011 and I moved to the US on a work visa with my wife and by this point Twitter was huge. While looking for work in the US  – first in Seattle and then the Bay Area – I figured I should probably use a handle that was easier for potential employers to identify as me.

I had the thought that one day someone might come asking about the @POTUS handle so I tried to register it to another address I had, but I wasn’t able to. I quickly gave up on it and hadn’t really thought much about it, until today.

Clearly, I should’ve tried harder to maintain the handle!

Don’t worry Steve, you’ll always be the President of Twitter to me.

Read next: Bad day? SoAwkward lets you read other people's 'so awkward' moments from Twitter