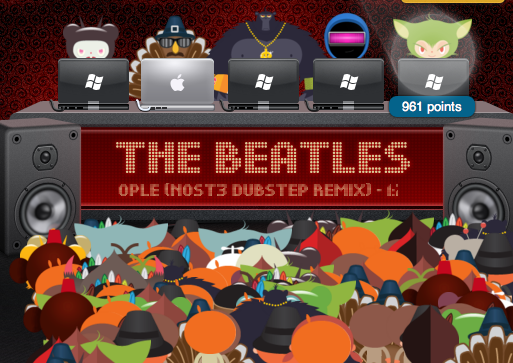 Previously the only method for signing in was to have a Facebook account and to have a friend on FB that was already on the Turntable.fm service. Presumably that will now be extended to Twitter account holders as well.

If you’re unfamiliar with Turntable.fm, it’s a service that allows you to pop into various rooms that contain an audience and 5 spots for DJ’s. You can take your turn at the tables, uploading songs from your personal library or searching the service’s library of songs to play back.

Once you’re in a room, you have the ability to vote on a song that’s playing as Awesome or Lame, which will give points to the DJ that can be used to unlock unique avatars.

I’ve come to love the service as a way to discover new music, although much of what is played is electronic tunes of some sort. There are dedicated rooms for all tastes and anyone is free to create their own and spread a link around. This allows for impromptu ‘check this track out’ parties.

Many of us are fans of the service here at TNW, and we’re not alone, music geek James Aviaz of Songtrust thinks that the service has a real future. Turntable, as a platform for the social DJ, is an exciting service, but its recent limitations of not being available outside of the US, despite assurances about licensing, have dampened some of that excitement for international users.

Read next: One of the raddest ski runs I've ever seen