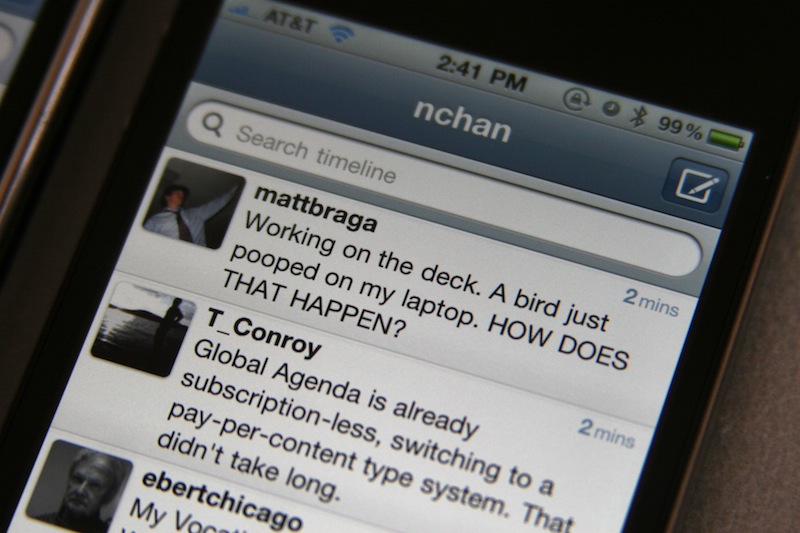 Twitter has begun a new campaign to direct its users towards its mobile applications, creating a new page that shows how you can “take Twitter with you” by downloading the official Twitter apps, displayed when a user logs out of the main website.

When signing out, you are now met with a stylish download page which asks if the user owns an iPhone, Android, iPad, BlackBerry or Windows Phone 7 device, also highlighting the fact that Twitter allows updates to be delivered by SMS using any mobile device.

Ryan Spoon was one of the first to notice the change, recognising that Twitter’s new mobile-centric page is similar to a promotional technique used by Facebook when users log out of the social network:

Twitter’s timeline layouts make it difficult for the company to advertise the number of applications it has available for users, so using the log out page makes sense. With the majority of users still accessing the Twitter website to update their accounts, many will be unaware that they will be able to “take Twitter with them” and interact with their followers on the move.

In order to make downloading as easy as possible, Twitter has created an individual page for each app, providing QR codes, delivery by email and additional information to ensure its users are not left confused by the download process.

Twitter appears to be working hard to ensure new users continue to interact with the service once they have signed up, something the company has struggled to do in the past. With over 200 million registered users, it is estimated that only 20 million of them are actively using the service, a number Twitter will want to increase in order to monetize the service and increase revenue.

Read next: Why you should check your privacy and app settings often