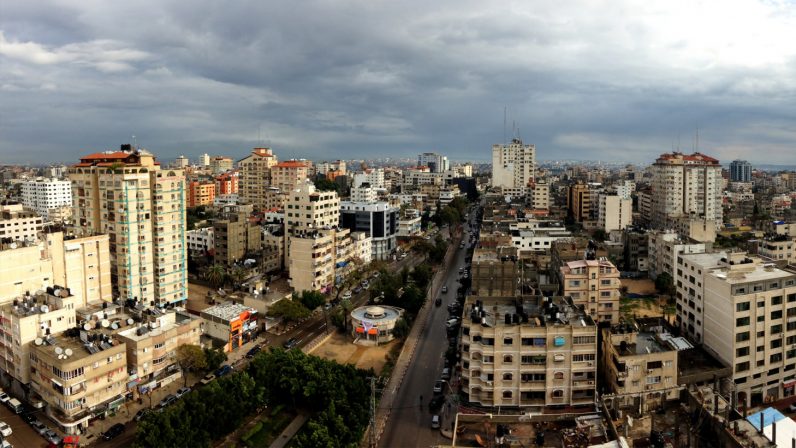 Through the media’s narrow lens, the Gaza Strip is a land of sealed borders, numerous conflicts, and an unemployment rate hovering around 50 percent. An unlikely consequence of this repression, however, is the city’s thriving tech scene which has become its lifeline to the rest of the world.

One Palestinian techie who’s doing his best to break down barriers and change people’s perceptions of Gaza is Hani Mortaja. Recently undertaking a six-week Community Management Internship here at TQ, Hani has helped us get to know the side of Gaza we don’t usually see in the news: many young, ambitious, and intelligent people trying to make their own way in the world.

As a survivor of three serious conflicts between 2008 and 2014, Hani has been through struggles many of us can’t even begin to imagine. But he wants people to start looking beyond Gaza’s rough exterior and see it for the vibrant and energetic city it is, despite being an area of conflict.

So how did a Hani end up in Amsterdam?

Hani works as a Data and Operations Officer at Gaza Sky Geeks (GSG), the first startup accelerator in Gaza. Founded in 2011 by Google.org and the humanitarian aid agency, Mercy Corps. GSG is also a coworking space and a tech-education hub helping Gazans as young as 14 turn their ideas into businesses with the help of mentoring and training programs.

Hani came to TQ in Amsterdam on a staff exchange made possible by TQ’s partner, Google for Entrepreneurs, and The Student Hotel. The entrepreneur program is a branch of Google devoted to empowering and providing support to startup programs in 135 countries around the world.

With only one percent of Gazans successfully leaving the city each year, the fact that Hani made it to Amsterdam was just short of a miracle. With a limited amount of exit permits available, thankfully, he was able to attain one through his work — but it wasn’t easy. He waited seven months to have his name listed for travel, spent two days waiting to be processed at Rafah — the Gaza-Egypt border — followed by a twelve-hour bus ride through war-torn Egypt to Cairo, where he was then told he had to book a new flight even though he already had one.

After a solid five days of transit, he finally made it to Amsterdam, only to have to apply for a new visa to work because it had expired during the lengthy process of getting here.

As you can tell by what Hani went through just to get to Amsterdam, there’s not much standing in his way. After listening to his story, it’s hard to believe he’s been through so many difficulties, given his constant warmth and positivity. If a great entrepreneur is someone who takes initiative and overcomes challenges by finding innovative solutions, it’s no surprise that Gaza is full of them.

As Hani recounted his story, it became apparent that each conflict he experienced drove him to really think about what impact he wants to make in this world — explaining why so many Gazans have this innate drive despite what they’ve been through.

In 2008, while still in high school, Hani endured his first war: the three-week conflict between Palestine and Israel. While the city went into complete lock-down and everyone was urged to stay at home, Hani’s curiosity went into overdrive. “I’m a crazy guy and I can’t just stay at home, so I was secretly sneaking out to go and see what was really happening,” he explained. This was just the beginning of Hani’s desire to show the world what was really going on. 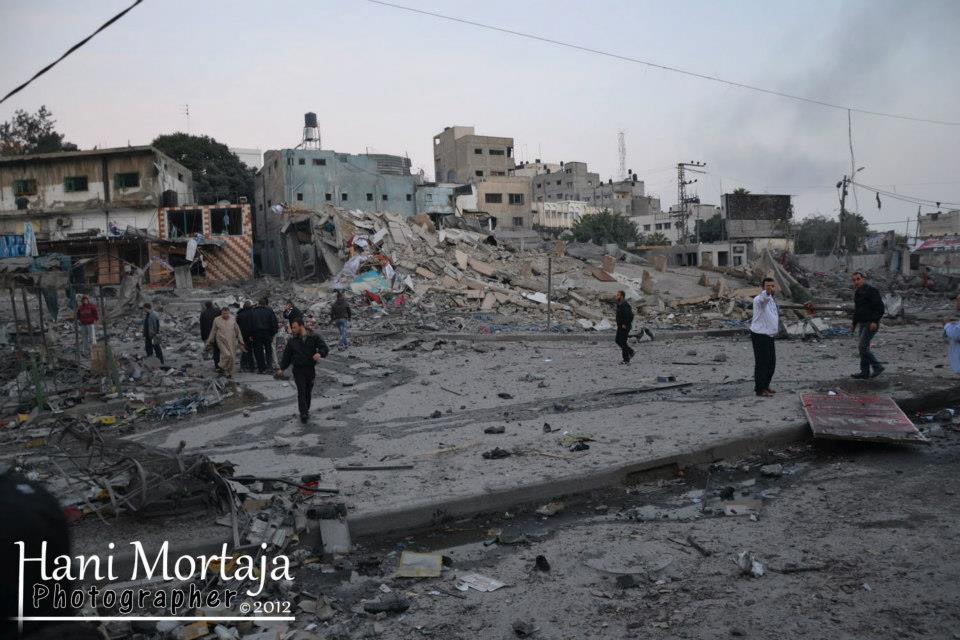 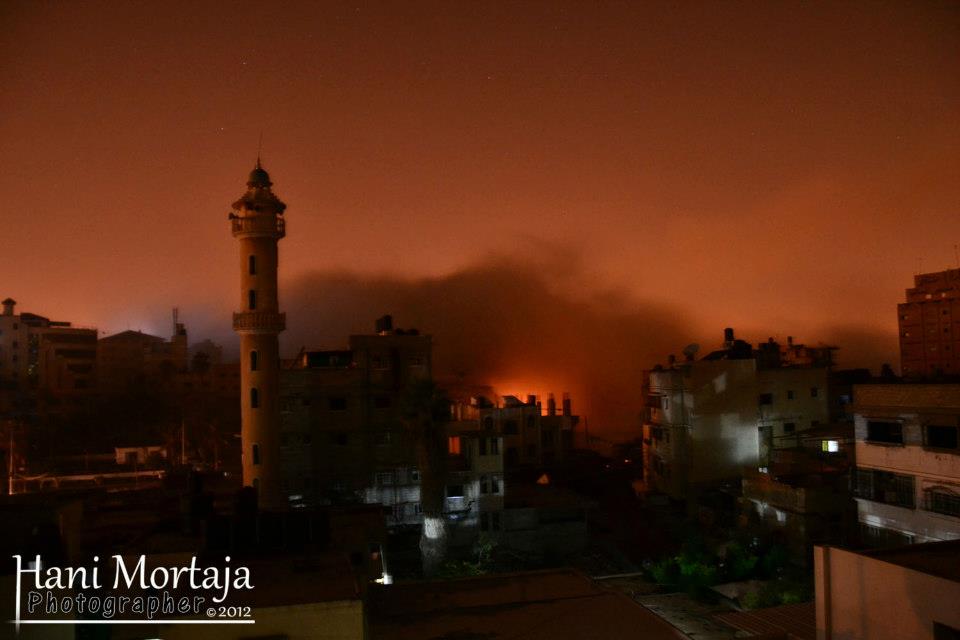 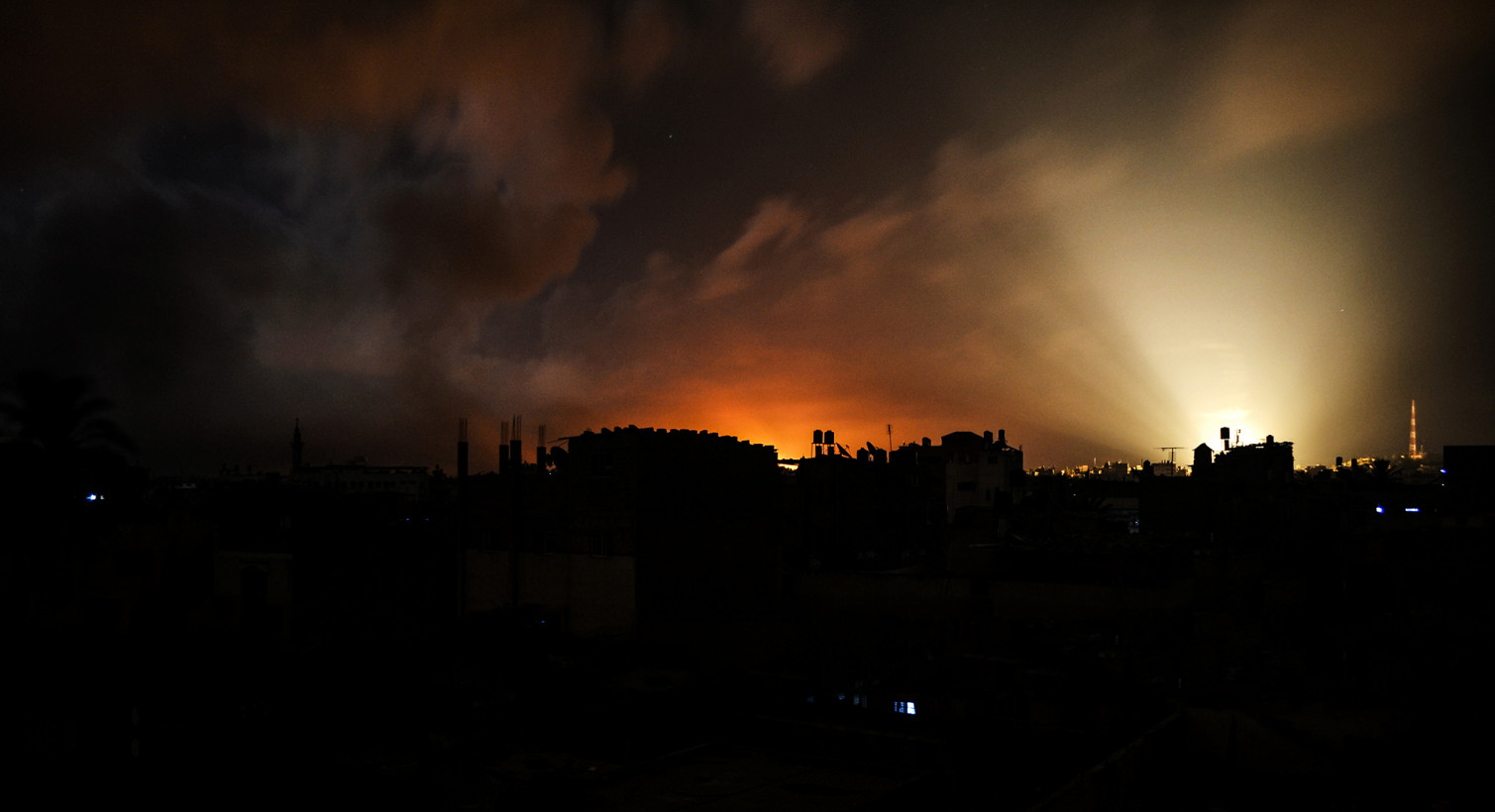 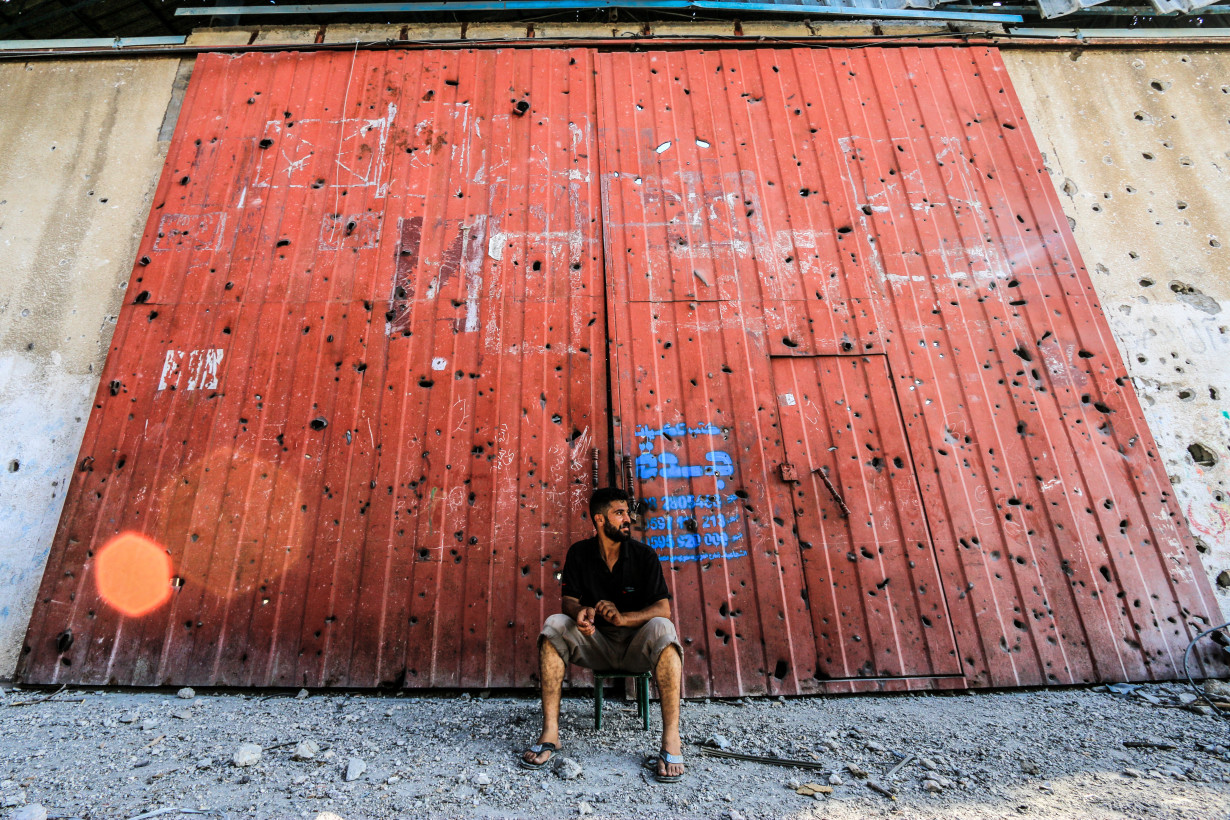 When Hani was in his second year of university preparing for his final exams, another serious outbreak of violence between Israel and Gaza broke out. “2012 was my shifting point for many things,” Hani explained. “I was older and understood things better.” At the time, Hani wasn’t really enjoying his civil engineering course. “I had the time to think and I was like ‘Okay man, what if you’re killed in this war, then you didn’t get to do what you loved. You should think about your life and live your life,’” he explained.

Upon doing really well in his new course, he eventually admitted this move to his parents and launched into the world of tech. He soon became a leader of the Microsoft Student Partners (MSP) group training university students in Microsoft and other technologies. He led MSP’s “Hour of Code,” participated in Gaza’s first hologram event, and was one of the main logistics and operations leaders at Startup Weekend Gaza four and five, as well as two GSG Bootcamps.

In 2014, after working hard in his IT course and beginning to volunteer as a logistics assistant at Gaza Sky Geeks, the 50-day Israel–Gaza conflict broke out. During this time, Hani’s whole family — around 25 people — were living in an 80 square meter home. Of course, Hani being Hani had other plans.

He decided to sleep at Gaza’s main hospital where the victims of the conflict were being taken. He stayed there for three weeks documenting what he saw, occasionally returning home to bring his family food. He was very active on social media during this period, uploading many photos, videos, and audio recordings onto Twitter and Facebook to get the message out about what was really going on in Gaza.

During this time, one night at midnight, Hani’s own university, The Islamic University of Gaza was targeted by Israeli warplanes. “Everyone was focused on a different place and no one could get there, so my friend and I were the first people there. I took some photos and shared them online, then I received an email from CNN asking if they could use my photos which they did.” 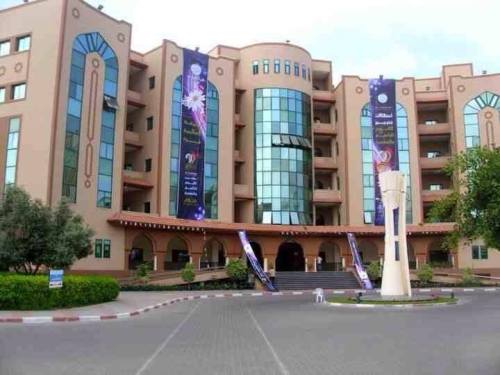 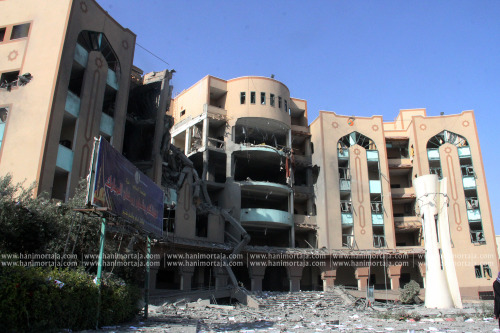 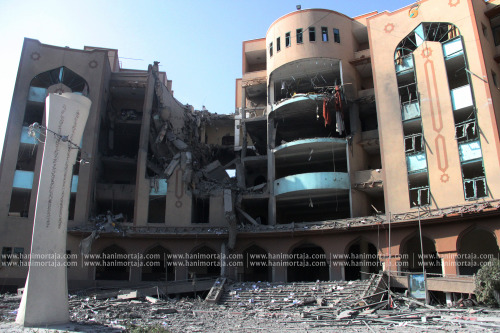 The most profound detail Hani shared was that during the entire war, he and other employees from Gaza Sky Geeks did not stop working. “Whenever there was a cease-fire we would meet and check in with people, calling everyone every day. We would meet anywhere we could — houses of friends and colleagues — but we were all still doing our jobs,” he explained.

The fact that Gazans like Hani find the strength to work through times of conflict is a perfect example of their deep drive to lead normal lives and create something for the benefit of others. “The war is always there, but we are not thinking of war always,” he explained. It’s truly inspirational to see how industrious Hani and other Palestinians are innovating under circumstances most of us can hardly imagine.

Entrepreneurship at its finest

While there hasn’t been a war since 2014, that doesn’t mean the challenges have stopped for Gaza. Whether to do with unemployment, infrastructure, mobility or the lack of awareness about global trends, Gaza’s problems are real. However, like most difficulties, Gazans are quick to improvise and find solutions.

With only four to eight hours of electricity available per day, for example, you’d think that powering your house or charging your devices would be a far-off luxury, but Hani explained this is not the case. “We use batteries and connect them to our devices or routers so we have internet and charge all day. At home, we’re now using solar power to get electricity. I installed solar panels with two big batteries and an inverter so I have light and internet all the time,” he continued.

In terms of unemployment, Gaza Sky Geeks is doing its best to support Palestine’s tech ecosystem. Whether its public workshops, hackathons, intensive mentorship, freelance apprenticeships or coding workshops, GSG is all about turning realistic ideas into businesses which can create jobs.

“Every three months we conduct research into which types of jobs have the highest demand and then we lead training programs based on where the market is going and where the jobs are,” explained Hani.

GSG is also incredibly committed to keeping diversity and inclusion at the forefront of their work. From the beginning, they’ve been dedicated to creating an environment particularly inclusive for women, even hiring a Women’s Inclusivity Program Manager.

Even though Gaza is quite conservative, especially when it comes to non-familial women and men mixing, GSG strives to engage the families of women to learn about the space to shift cultural mindsets. The results are quite impressive, with women making up around 43 percent of the freelancers, coders, and entrepreneurs in GSG’s co-working space, compared to ‘internet entrepreneurs’ globally in which women only make up ten percent.

Hani’s exchange in Amsterdam emphasized the significance of staff exchange programs like Google For Entrepreneurs’ and how they can bring us new perspectives. Tech in Gaza is not only creating jobs but is also giving young, ambitious talent the opportunity to create something for themselves and connect with the outside world they can’t usually reach physically.

While there’s still a long way to go, Hani showed us a side to Gaza that needs to be acknowledged more. And by sharing his story, I hope to open people’s eyes to the many extraordinarily driven entrepreneurs in Gaza that need your support.

This story was originally published on TQ Stories.

Read next: HO£IDA¥ GUID€$: How to spend your money on Star Wars day, May the Fourth