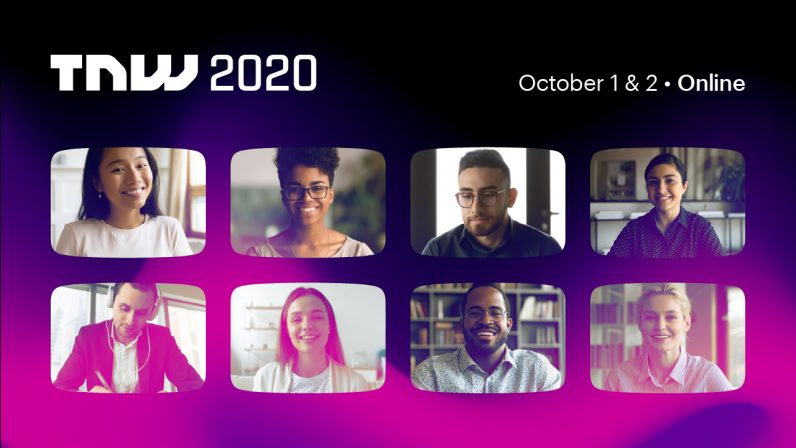 There’s nothing like an inspiring talk to get fresh ideas and newfound motivation pumping. And after two exciting days packed with over 200 sessions led by thought leaders, CEOs, artists, change-makers, and VCs, we’re feeling a new energy taking over.

But all good things must come to an end. In case you missed TNW2020, not to worry! Here’s a summary of a few things we learned this year:

According to UNHCR, in 2017 alone 18.8 million people were displaced due to climate-related natural disasters. The effects of climate change are being seen across the globe, but underprivileged communities suffer greater risk due to a lack of advanced warning signals, access to resources, and more.

However, technology could help to empower displaced peoples and even prevent displacement from happening in the first place.

Deputy director, climate, and environment division – CBC, Food, and Agriculture Organization at the United Nations, and Amanda Southworth, Founder and Executive Director of Astra Labs, held an illuminating session on this topic.

One of the biggest issues displaced persons face is gaining access to documentation. Without an identity, it’s almost impossible to receive access to healthcare, government support, and other essential needs. But the development of blockchain-backed digital identities is helping to change this.

Rather than just focusing on how tech could help people after a disaster, the speakers also highlighted the importance of technology in playing a preventionary role by providing communities with access to weather alerts and other potential disasters (locust migrations was one example that can easily cause a food crisis).

However, one of the most important things to focus on when building tools for this user group is trust. When governments and institutions have failed them, winning trust requires listening and building products that address their concerns over data privacy, accessibility, etc.

The best tech brands know how to build solutions that are accessible, user-friendly, and solve our biggest problems. But what if governments built solutions for citizens the same way? Normally the words local government and user-friendly don’t go together. Instead, we imagine long lines, complicated forms, long wait times, and bureaucratic hurdles.

The Dutch government and local municipalities are looking to change that by adopting a faster, more collaborative, and agile way of developing GovTech. Joost Broumels, Co-producer at Fieldlab VNG, and Nicole Zwart, Coordinator for digital government, hosted a session on this topic to explain what field labs are and how they’ve impacted local governments’ way of producing user-friendly tech solutions for citizens.

Fieldlabs are the equivalent of a dev team’s sprints. They’re made up of interdisciplinary teams that take about one week to focus on achieving one specific goal. As Broumels explained, this way of working has allowed them to consolidate projects that would normally have taken months into just one week. It’s also eliminated the silos that often inhibit local governments.

One of the really innovative projects they’re working on is how to leverage digital twins to create more sustainable, resilient cities. By setting up a virtual infrastructure of a city, this tech allows local governments to visualize and identify potential improvements in real-time. They’re currently working to see how they can upscale and make this tech more inclusive so cities can take full advantage of it.

Some of the general themes they’re working on now include digital inclusion, digital identity, and technology and public values. They’re also holding open workshops where the public can join and share their ideas. One of the next ones will be on the impact of technology on the relationship between citizens and government. Is it time for a new social contract?

In a world focused on rapid growth, revenue, and virality, empathy isn’t something that gets talked about as much as it should. But now more than ever, we need empathy integrated into the way we manage our teams and build our products.

In his introductory keynote, Andreou shared a few learnings from Snap Inc. that highlighted the importance of empathy when it comes to product innovation and lessons the company has learned. For example, in a previous version of Snapchat, people could see each other’s best friends list. While the aim was to highlight the people you care about and talk with the most, they soon realized this feature created some uncomfortable situations for Snapchatters.

During the fireside chat portion of the session, an interesting debate that came up was focused on the role of brands’ during times of crisis. Should brands be speaking out on (social) issues? If so, how can they do so authentically and meaningfully?

Over the last few months, the need for managers to lead with empathy has been essential. From the switch to managing remote teams to the impact of COVID-19 and the Black Lives Matter movement, empathy is a key component during internal discussions about supporting (mental) health and improving diversity.

The future of data ownership and AI

This interesting session with ABN AMRO’s Chief Innovation Officer, Edwin Van Bommel, and Dennis de Reus gave us insight into how the Dutch bank is using data and AI to revolutionize its way of working.

If you caught the session on ‘Detecting financial crime’, you’ll know that the bank is already harnessing the power of AI to improve its transaction monitoring capabilities, allowing it to more successfully identify and prevent financial crimes like money laundering and cyberattacks.

While it’s providing more opportunities to advance security, it’s also helping them to speed up and improve customer service with the help of chatbots and task automation. For example, chatbots are now helping customer support teams on Whatsapp by suggesting possible answers to customer questions. Image recognition and text analysis is being used to quickly and efficiently analyze receipts on Tikkie, and facilitate new cashback features.

At the same time, this doesn’t mean that you’ll be getting mortgage advice from a robot in the future. Instead, they see this technology helping to continuously streamline processes, automate smaller and repetitive tasks, and free-up more time for employees to use their creativity and come up with new solutions. Human interactions will always be important, now they’ll just be given an extra boost with AI-backed tech.

The UK as your global launchpad

During a session hosted by the British Embassy, three European startups shared their experiences joining the UK Global Entrepreneur Programme.

For Diane Janknegt, CEO of Wizenoze, an EdTech startup that aims to be the largest information provider for learners, the choice was obvious. The British curriculum is used around the world and a lot of the major publishers are based in London. And it seems this was a good move.

The expansion allowed them to get one of the biggest publishers in their space onboard (Pearson), which really helped them to scale their operations quickly. The diversity of London also allowed them to hire a diverse team – which, as Janknegt pointed out, you really need if you want to go global.

However, Janknegt did warn that opening a bank account in the UK, does require time and patience, but if you’re prepared for that, good things will come.

Luigi Fidelio, CMO and Co-founder of Messagenius, knew that staying in Italy would have meant intense competition from local players and dealing with a lot of regulatory issues. Instead, going to the UK allowed his team to accelerate growth by providing access to VC funding. The UK’s dynamic business environment helped them scale and connect with top corporates and like-minded entrepreneurs.

Nish Kotecha, Chairman and Co-founder of Finboot, has the ambition to create the industry standard for blockchain adoption in the enterprise sector. Finboot is competing against global actors, they’re focusing on global supply chains and global value chains. This means they needed to be positioned in the right location to get access to the global organizations that would help them reach the next level. Joining the program also helped open more VC doors.

With increasing consumer awareness and governmental regulations, sustainability has been on the agenda for many companies for quite some time now. The question is, how do we move from talk to action?

During this session Fredrika Klarén, Head of Sustainability at Polestar, Renae Kezar, Global Leader of Sustainability at Avery Dennison, Iggy Bassi CEO of Cervest, and Lucy von Sturmer, founder of The Humblebrag shared the sustainability issues within their industry, how their company is taking action, and the main challenges we’re facing in building a more sustainable future.

Klarén and Kezar highlighted some of the tech that’s now being leveraged to improve sustainability standards. For example, at Avery Dennison, intelligent labeling is helping ecommerce brands to develop sustainable products and packaging, while also giving consumers more transparent information about sourcing. At Polestar, blockchain is being used to trace cobalt from the mines where it’s sourced to the cars it’s being used in, improving traceability efforts.

But there’s still some hurdles along the way.

Bassi shared that, while more companies are starting to share sustainability data a lot of it is still fragmented. There’s also a need for more independent data and platforms.

Similarly, in the automotive industry, Klarén explained that there’s too much generic data being shared. The lack of transparency and issues like dieselgate and greenwashing have made many consumers lose trust in the industry.

In response, in September Polestar published a full report on the sustainability of their cars, including their calculation methodology. They’re now calling on other actors in the automotive industry to do the same so customers can really start comparing and seeing the impact their choices have.

The future is seamless connected living

Andrew Garrihy, Huawei’s Global Chief Brand Officer, started this session off with a simple question, “How connected are you?”

As the current dominator in global smartphone sales, Huawei is now expanding its vision for the future to a world in which all our devices are connected and working together to make our lives as easy and efficient as possible.

As Garrihy pointed out, the world and our values are changing significantly due to Covid-19. It’s caused us to rethink the way we live our lives with more people thinking of making career changes and more city dwellers looking to leave the hustle and bustle for green, open spaces. But, most of all, technology is playing a more important role than ever, connecting us to the outside world and helping make our hectic lives easier.

Huawei’s new line of hardware and software solutions are centered on improving connectivity so all your devices work together seamlessly.

The company’s new strategy centers on your smartphone, connecting it to eight different Huawei devices through Huawei share. These devices are then connected to the wider world of IoT products via Hi-link, regardless of the manufacturer. These new solutions are set to usher in the new smart home, smart vehicle, and smart remote work life.

That was just a few of the amazing sessions at this year’s TNW2020. Join us next year for an even better TNW2021!

This article is brought to you by BZK, Snap Inc., ABN AMRO, the British Embassy at The Hague, Polestar, and Huawei.