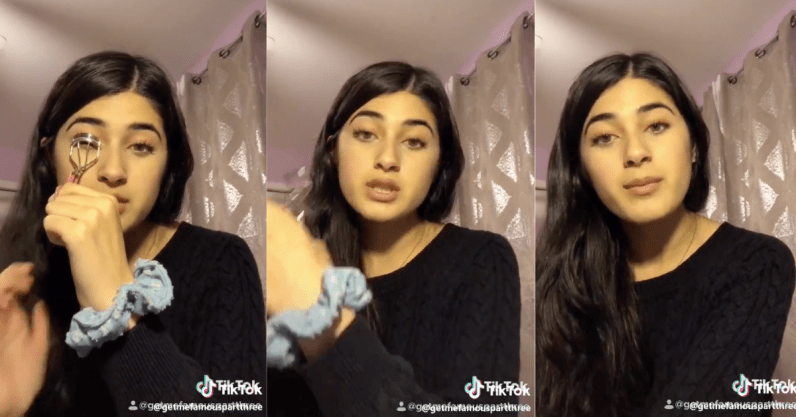 A 17-year old Muslim girl on TikTok has been uploading now-viral makeup tutorials, but with a political twist. In a video shared by “@getmefamouspartthree,” Feroza Aziz seemingly gives tips on how to lengthen your lashes by telling users to grab a set of lash curlers, but then directs viewers to use their phones to search for “China’s Muslim concentration camps” — this is in reference to the detention of approximately 1 million Uighur people in Xinjiang, China right now.

“So the first thing you need to do is grab your lash curler, curl your lashes, obviously, then you’re going to put them down and use your phone that you’re using right now to search up what’s happening in China, how they’re getting concentration camps, throwing innocent Muslims in there, separating their families from each other, kidnapping them, murdering them, raping them, forcing them to eat pork, forcing them to drink, forcing them to convert to different religions, if not, or else they’re going to, of course, get murdered,” Aziz said in the video.

GUYS NO JOKE THIS TUTORIAL HELPED ME SO MUCH PLEASE WATCH IT pic.twitter.com/BuITSebOu6

After the video picked up millions of views in just two days, TikTok suspended Aziz’s account but claimed it was in response to a video about terrorist Osama Bin Laden, and not because of her videos condemning China.

China is scared of the truth spreading. Let’s keep scaring them and spread the truth. Save the Muslims #chineseholocaust #muslim pic.twitter.com/GbreNFWBEc

“TikTok does not moderate content due to political sensitivities,” a spokesperson told Business Insider yesterday. “In this case, the user’s previous account and associated device were banned after she posted a video of Osama Bin Laden, which is a violation of TikTok’s ban on promoting terrorists.

Earlier today, Aziz tweeted that even after reaching out to TikTok, she is still waiting for a response:

Update: I have reached out to tik tok yesterday morning and still haven’t gotten a response. I am still waiting for them to explain to me why my account was suspended, the day after I finished posting my three part video on the Uyghurs

While the video-sharing content denies that Aziz’s account was suspended on the grounds of political issues, the company is owned by Chinese organization, ByteDance. According to Business Insider, ByteDance has a history of working with the government to censor online content.

And within the hour of posting this article, Aziz tweeted that TikTok has now taken down her videos spreading awareness on the Uyghur Genocide, while asking for President to “discuss” this matter. Soon after tweeting this, Aziz’s account was “suspiciously” allowed back on the platform.

UPDATE: TIK TOK HAS TAKEN DOWN MY VIDEO SPREADING AWARENESS ON THE UYGHUR GENOCIDE. THIS IS PROOF THAT CHINA IS USING TIK TOK TO NOT LET THE TRUTH BE SET FREE. CHINA IS SCARED. @realDonaldTrump is there any way we can discuss?

As first noted by Business Insider, Aziz is not the first activist to post videos on TikTok spreading awareness about the Uighurs. During the summer, dozens of Uighurs living in Xinjiang posted videos on Douyin, the Chinese version of TikTok, appearing to show old family photos with footage edited to show themselves crying or gesturing.

After publishing this story, TikTok apologized for banning Aziz’s account and has now reinstated her profile. Additionally, the social network said “human moderation error” was to blame for the video being taken down on Thursday for almost an hour.

Read next: Hackers mass-scan for Docker vulnerability to mine Monero cryptocurrency