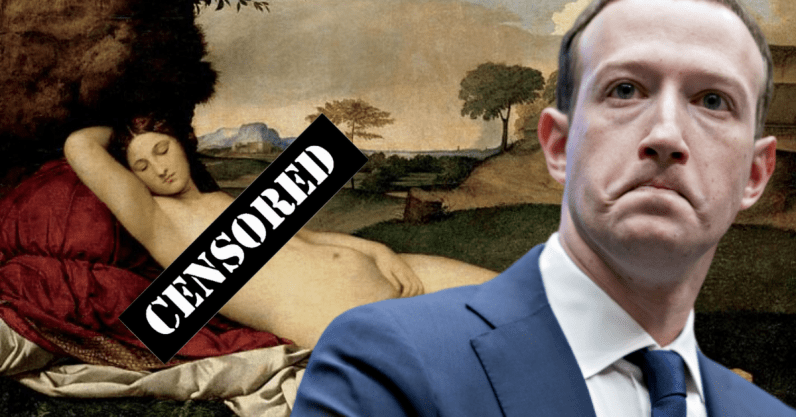 Last year, Facebook began clamping down on ‘inappropriate content‘ by banning discussion around “sexual preference,” “sexual roles,” “breasts,” and “buttocks” on the site. The tech giant has now quietly updated its policies, under the guise of preventing “sexual solicitation,” and now restricts solicitation involving “sexual emoji or emoji strings” and nudity “including long shots of fully nude butts” — further restricting the type of posts sex workers and NSFW artists are allowed to share.

“I’ve had clean photos removed before and I’ve also experienced shadow-banning on both Instagram and Twitter,” Lust said. “This means when people tried to search for my account, I didn’t appear in the search terms. For people who already followed me, I would be listed tenth on the list when searching with my username.”

At the time, Instagram allegedly denied that it shadow-banned Lust’ account. “But after I ran a campaign about it on my account and asked my followers and other female artists working with sex to share their experiences, Instagramed lifted the ban,” Lust added.

As a platform that blocks the phase “men are trash,” yet allows “women are trash” on its platform, it should come as no surprise that Facebook and Instagram don’t celebrate women taking ownership of their own body, Lust argues.

There are painfully obvious double standards on the social networks. “The Dan Bilzerians of the world are free to keep sending their misogynistic message that women are only accessories to their lavish lifestyle. When Dan posts a picture using a naked woman as a table to rest his trophy on, he’s not censored,” Lust explained.

“But when Rupi Kaur posts a photo of her fully clothed in bed with a period stain she is censored… what message does this send? It tells me that we live in a male-dominated world that doesn’t want the status quo changed, where media allows commodification of women but keeps censoring their bodies when they take ownership of it. What stops any men from doing this in real life if this is the message social media keeps sending out?”

“The rules are grey and very vague,” Lust said. “How does an algorithm differentiate between a suggestive peach emoji and an edible peach emoji? And does it really matter?”

The future for NSFW artists is ‘bleak’

If social media continues to purge NSFW accounts and take control of people’s sexual expression, Lust argues the future looks bleak. “I think people who want to see a broader spectrum of sexual content and bodies will have no choice but to move to other platforms soon.

“With the demise of Tumblr there are a lot of sexually expressive artists, sex workers, and people in general who want to explore their sexuality online with nowhere to go,” Lust added.

Instagram is missing out on an opportunity to facilitate and support important conversations — particularly as discussions and notions of sexuality are becoming more nuanced as time moves forward.

“This type of censorship is going to affect more than artists, sex workers, and companies like mine,” Lust added. “Amidst all of this debate about what censorship should look like, I worry we have forgotten why censorship is raised in the first place — to protect young people from damaging and dangerous or simply inappropriate content.”

The content Facebook and Instagram are blocking, such as female nipples, aren’t reflecting its commitment to protect minors. “They are instead creating a tide of moral panic resulting in ridiculous limits often detrimental to those they’re trying to protect.”

The occasional exposure to something that might not be entirely age appropriate — be that an aubergine emoji in sexual context or a female nipple — is a small price to pay if the slackening of censorship policy surrounding content of a sexual nature means young people are better able to gain access to accurate information about sex, sexual health, and abuse.

“Seeing female nipples is not going to do serious harm, however an inability to report sexual abuse, or spot the signs of an STI can cause real damage.”

“The type of censorship strategies fixated on preventing any and all access to sex related content do not work and can do more harm than good,” Lust said. “Our children need access to reliable information about sex and sexuality more than ever and the internet is a great space for them to find this information — prohibiting them from doing this censorship policy is failing to protect them.”

Read next: How to become a speed reading machine in 30 days