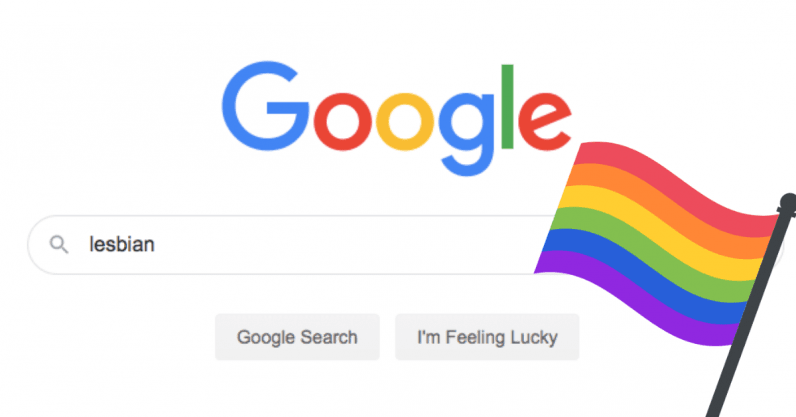 Just last month, if you were to type ‘lesbian’ into Google, you’d be faced with a wall of pornographic imagery. However, after months of campaigning, Google has finally changed its algorithm for the better.

According to PinkNews, the search engine will now show informative results when you search for ‘lesbian’ including recent news stories and Wikipedia entries — even if Safe Search is not activated.

The campaign to change the unnecessary sexualization of lesbians was led by the Twitter account @SEO_lesbienne and the French news site Numerama’s reporter, Marie Turcan. In their research, they found that only the word ‘lesbian’ was linked to pornographic sites, whereas searching for ‘gay’ or ‘trans’ linked to informative pages including Wikipedia, top news articles, and specialized blogs.

Initial investigation began when Numerama reported on the pornographic results that appeared underneath Google’s Pride banner in June.

Having pornographic links and other sexualized content of lesbians show up, before their history or other informative sites, adds to the culture of over-sexualizing lesbians and treating them as mere entertainment. This dangerous culture, which Google had previously been adding to, was cited as one of main reasons behind the homophobic abuse many lesbian women experience — including the recent attack on a couple on a London bus and during Amsterdam Pride last weekend.

Numerama found that a few days after Google released its Pride banner, it had stopped appearing for lesbian-related terms with no explanation. When Numerama questioned the search engine at a later date, Pandu Nayak, Google’s Vice President of Search Engine Quality explained: “I find that these [search] results are terrible, there is no doubt about it.”

“We are aware there are problems like this, in many languages ​​and different researches. We’ve developed algorithms to improve this research, one after the other,” Nayak told Numerama. “We have taken measures in cases where, when there is a reason for the word to be interpreted in a non-pornographic way, that interpretation is put forward.”

Google’s update to its search algorithm is a great step towards inclusivity and representation for lesbians. However, Nayak referenced how terms like “school girl” and “teen” often do bring up pornographic results, but Google’s allegedly cracking down on this too.

Read next: Binance offering up to $290,000 bounty to catch cryptocurrency KYC extortionist