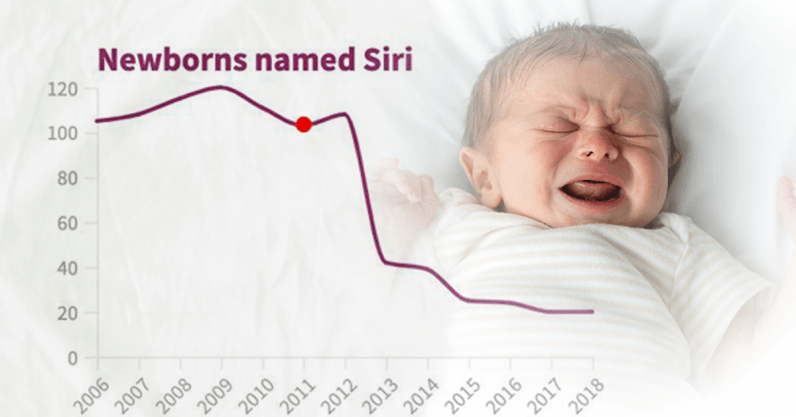 Picking a name for your kid can be a long and difficult process. You have to take into account factors like the name’s sound, its meaning, its cultural connotations, and your family history. It’s a goddamn minefield and technology has only made it worse.

Nowadays, the real and digital worlds are increasingly blended, making it tough to separate the two. Just consider how AI voice assistants are being given “proper human” names, such as Alexa, Bixby, Cortana, and Siri.

I guess tech companies are doing this to make us think they’re actual people and not brainless robots. But this blurring of the line between the digital and real is surely having an impact on the world, right?

Well, we had to find out, so, we asked ourselves a simple question: what are voice assistants doing to perfectly good kid names?

We dove into the data to get an answer.

Some info on the figures: the above charts show the number of children born in the US since 2006 with an identical name to an AI voice assistant as registered by the Social Security Administration (SSA). The red dots on the graphs indicate the launch year of each particular voice assistant.

Strangely, the year after each assistant’s launch the popularity of its name spikes among newborns. Who knows what those people were thinking.

After that initial bump however, the popularity of each name decreases steadily and sharply. Alexa’s popularity shrank by 50 percent in just three years, Cortana fell 83 percent in the same period, and Siri dipped a whopping 81 percent in five years.

Oh, and we didn’t include Bixby because it only launched in 2017, so we didn’t have enough data.

One can, of course, argue that these are just natural fluctuations. For instance, Alexa seems to be back on its normal downwards trendline, and Bixby, Cortana, and Siri’s data is fairly limited. Yet the overarching trend of a spike in the year after launch and a clear downtrend after that can’t be ignored.

So, it looks like we’ve learned something today: the tech industry can destroy the popularity of a human name. That is, in the short-term at least. Only time will tell whether further normalization or termination of these voice assistants will have a more permanent effect.