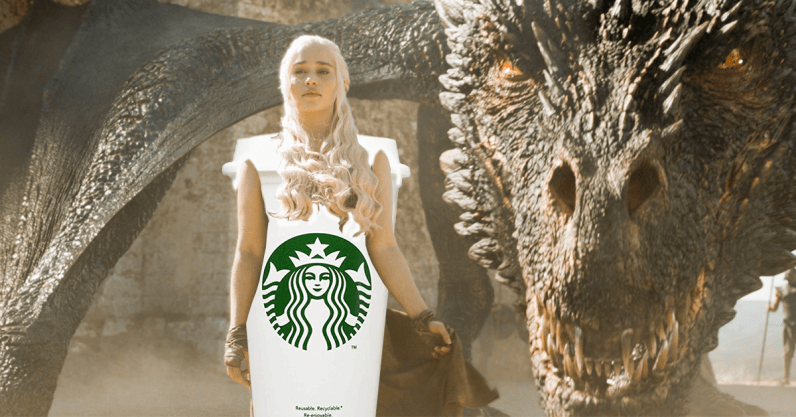 Don’t worry, there are no spoilers about the latest episode below. But, if you’re slightly behind the release schedule, there are some light reveals.

Game of Thrones is a phenomenon. It’s a record-breaking, budget-busting entertainment behemoth that might well be the most popular TV show of all time. Yet despite all the money and effort that goes into the series, the creators couldn’t stop a coffee cup from entering Westeros (that’s the nerd land where all the nerd shit happens btw).

Yep, in the fourth episode of the eighth and final season of Game of Thrones (titled, ‘The Last of the Starks’) a Starbucks cup made an appearance. Check it out:

Of course, Twitter was awash with jokes, the majority of which are better than what we’d attempt. So, for efficiency’s sake, here are two of our favorites:

Daenerys Stormborn of House Targaryen, the First of Her Name, Queen of the Andals and the First Men, Protector of the Seven Kingdoms, the Mother of Dragons, the Khaleesi of the Great Grass Sea, the Unburnt, the Breaker of Chains, and Drinker of Pumpkin Spice pic.twitter.com/BOPdolRhXz

Jokes-aside, there is something… strange about this coffee cup’s appearance. Game of Thrones is the most expensive TV show ever and removing the offending article really wouldn’t take much time. To kinda half-prove the point, we photoshopped the stupid cup out of the screen grab ourselves.

Is it perfect? Nope, but that took under a minute to achieve. We even put it in a fancy slider so you can compare the two.

Of course, we’re only doing this on a still image – a moving picture is far more complex, right? Well, we asked our resident video producer how long it’d take to edit the Starbucks cup out of the shot. They reckoned about an hour.

Yeah, it might take longer than that in reality (especially considering the number of effects a scene like this will have), but one thing’s clear: if you can animate dragons spraying fire across a wintery landscape, you can probably remove a coffee cup in the background of a scene.

So why was it left in the episode? Most likely it was a simple oversight. Human error will always exist, even in something as gargantuan as Game of Thrones. In one way, that’s kinda refreshing; perfection is boring – it’s flaws that cause us to love.

Anyway, before we go, a game. We got hold of a photo of the original, unedited scene – can you spot all of the things that were removed in the episode that aired?

Read next: Bitfinex is skewing Bitcoin's price so much, it's now being ignored by CoinMarketCap