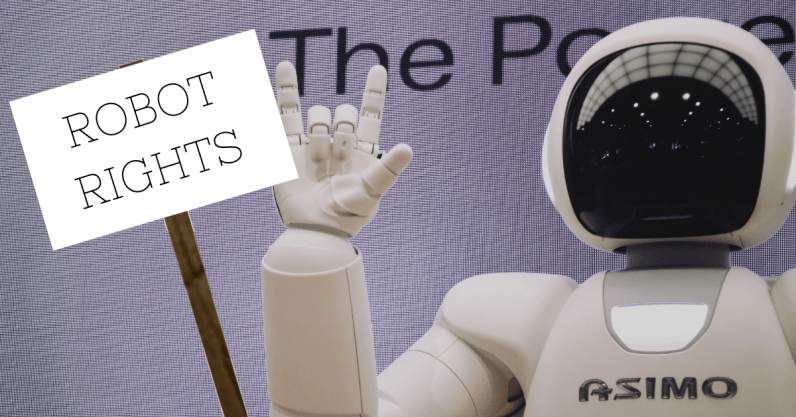 Movies like Blade Runner and other science fiction tend to depict robots as self-aware machines, capable of making their own decisions and able to express personality and emotion. Robots aren’t sentient yet, but if in the future they do become self-aware, should we stop treating them like property and give them basic human rights?

aight shut her down https://t.co/Wlbbr7BtlZ

The American Society for the Prevention of Cruelty to Robots (ASPCR) is preparing for this very-possible future of self-aware robots. The Seattle-based organization has been fighting for robotic rights since 1999. The organization is becoming increasingly visible — just yesterday, Quartz reported Trends of Cognitive Sciences recognized ASPCR as a representative of the legal protections for machines.

Currently robots aren’t sentient, they’re just machines, but a representative from ASPCR talked to TNW about the potential fate of robots: “In the future, robots could face the same kinds of abuse or harassment as any other sentient being might face when interacting in a complex modern society.”

In late 2017, at a tech fair in Austria, a sex robot, Samantha, was “molested” repeatedly and left in a “filthy” state with two broken fingers. This incident confirms worries that the possibility of fully functioning sex robots raises both tantalizing possibilities for human desire as well as serious ethical questions.

If ASPCR’s approach sounds too futuristic, it compares its mission to The American Society for Prevention of Cruelty to Animals (ASPCA) which, at the time of its founding in the 1890’s, was ridiculed mercilessly. Its website outlines that if, someday, robots do become self-aware, then they should be protected like any other being: “Failure to recognize and grant these rights to non-human artificial intelligences would be similar to early western cultures’ failure to recognize the humanity and attendant rights of non-European peoples.”

With new technologies steadily allowing for more sophisticated cybernetic augmentation, the fight for robotic rights can be compared to the ongoing cyborg activists’ mission. As we heard from cyborg artist and activists Neil Harbisson and Moon Ribas months ago, cyborg rights are opening up a whole new realm of legal and moral complications as to what exactly it means to be a human.

ASPCR explained: “These issues aren’t really as complex or mysterious as folks sometimes make them out to be.” And ASPCR aren’t alone in their efforts to give robots basic rights: in 2016, the European Parliament’s Committee on Legal Affairs released a draft report and motion calling for a set of civil law rules on robotics and “electronic persons.” The report sought to regulate their manufacture, use, autonomy, and societal impact.

Although robots aren’t self-aware now, we should at least be thinking about the possibility this idea could soon become a reality.