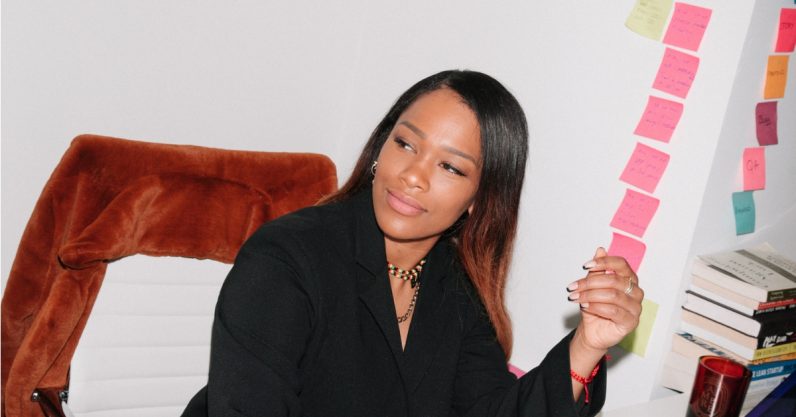 It wasn’t normal nail biting — it was anxiety biting. I’d chew on them ‘til they bled. My fingers looked like the stump from The Giving Tree — except way more bloody and depressing.

My parents tried everything — they taped mittens on my hands, dipped them in vinegar, threatened to execute my goldfish if I didn’t stop (kidding, but it would have been effective). All failed. The only way I stopped myself from treating my fingers like chicken wings was to trick myself into liking my nails.

Thus began my long and complicated relationship with beauty.

The beauty industry, despite pushes towards inclusion of the full gender spectrum, truly encapsulates the complications that come with being a woman today. We are constantly being pushed towards empowerment, while also being pressured into buying. This lipstick is a quick fix to feeling like a bad bitch — it will surely make you better at your job and fighting the patriarchy for just $9.99!

Yet participating in traditionally feminine industries carries along the risk of being delegitimized. Do we need to tone down the girly to be taken seriously? Will having cool nails affect how my (mainly male) coworkers view my work?

While many companies use feminism to manipulate women into buying shit they don’t need, there are companies and individuals who are getting it right by building empowering communities. One such individual is nail art pioneer Sharmadean Reid.

After creating a beloved hip hop fanzine and working as a stylist and brand consultant for companies like Nike, Sharmadean Reid found a cult following through her ultra cool London-based nail salon, WAH Nails.

Reid has long experimented with beauty and new technologies, such as a VR Nail Design app, and worked to create resources to help young women build sustainable careers, such as Future Girls Corp, an online platform with advice, events, and information for future female CEOs. Her work has also earned her an MBE.

We sat down with her to discuss her latest venture, beautystack, “a marketplace for next gen beauty professionals to essentially sell their work via pictures.” It promises a new way to book beauty online, and is one of the very few platforms which emphasizes the creator. By doing so it gives young women a platform to become financially self-sufficient.

Beautystack also recently closed a seed funding round, making Sharmadean Reid one of the few black women to raise over £1m.

Beautystack grew out of a decade-long frustration with existing software systems in the beauty industry: “I started my business thinking ‘Why does the software look like stuff I used at school, like Microsoft 98?’ All the existing salons software systems were not visually aesthetic, but beauty is obviously a visual business.”

WAH nails pioneered the use of viral images to grow a community and customer base. Instead of static portfolios on basic salon websites, WAH took pictures of “not only the nails we did in real time, but the girls who were our customers.”

Due to its vibrant nail art that gained a massive following on Tumblr and its emphasis on individuals, WAH quickly grew a cult following, whose fans include Serena Williams, Margot Robbie, and Jorja Smith. Today, it’s Instagram has more than 500k followers, and several nail artists with their own hefty following.

The lack of modern technology in beauty, Sharmadean says, is “disrespectful… you have all of this gloss and what’s behind the curtain is ugly. It basically devalues the workers, and prioritizes the consumers. What I want to do is prioritize the professional, and help these girls run their lives better and easier. Because if you look after them, they will look after the client.”

Another inevitable issue when it comes to beauty tech is that of gender, something Reid touches upon briefly: “The guy that builds the POS system, has never worked in a shop, or Top Shop in peak hour during half-term holidays. I feel I have a unique vantage point in that I’ve actually run a salon.”

It’s been well-documented that those working in STEM are overwhelmingly male, which undoubtedly affects what new technology is being built, as well as how good that tech ultimately is at serving its users. Beautystack is a glimpse into a future where technology for women is being built by women.

A new kind of social network

While beautystack carries the same engagement features as a site like Instagram, it’s better described as “social commerce” or “market network”, of which there are few outside of China.

Ultimately, the elements of beautystack come from what beauty professionals use most today, and address their most pressing needs which have thus far been ignored: “We did a massive survey, where we looked at every kind of beauty professional we’d want on the platform — if they had an online website, booking system, and if they didn’t did they prefer to be contacted by DM, email, WhatsApp? The results were so varied.”

“My point is this is a new category. Sure it’s a social network — salons were the original social network, yet they’ve never been digitized with the same principles as a hot startup — P2P, lots of engagement, and user-generated content.”

Emphasizing the individual creator is crucial for the future of the beauty industry. On beautystack, you’re not looking for the nearest convenient hair salon or the cheapest manicure, but through individual artists’ portfolios, curated by beautystack for their distinct individual styles.

Beautystack is adding bookings soon, but users can already download the app and upload treatments they’ve had, as well as follow others.

So far the app has gained fervent support, especially among London-based independent beauticians. Reid is careful to emphasize that beautystack isn’t solely for helping talented young pros gain more clients — they often have enough already, and very long waitlists — but to give them the tools to manage.

Ashade from Slash Beauty, an eyelash extension service, told us “beautystack has been really helpful for us, not only have we been super busy, our customers are so self-sufficient – they love the convenience of booking themselves in.”

Ewoma, a cosmetic doctor who runs skndoctor, said beautystack “helped me to manage my work load massively by allowing my clients to book whilst in busy during the day with my NHS patients.”

Reid says the young women she grew up with who always had money were the ones who could braid hair in the neighborhood. Beautystack allows individual talents like this to become financially independent in an industry that has always been devalued.

When I visited WAH Nails in London a few days after speaking with Reid, I found myself surrounded by unbelievably cool nail artists doing their thing, playing the music they wanted, borrowing each other’s tools, talking, and laughing.

Beautystack is slowly building up its portfolio of professionals all over the world. If it can bring the same energy WAH has to the internet, then it will live as an example of what a truly female run digital space could look like. Imagine: a massive digital beauty marketplace, powered by individual style, talent, and really cool women.

Putting time and effort into my nails made me self-conscious, that having nail art would somehow make me less good at writing about technology, or that people would feel like I didn’t know what I was doing.

And sure, the robots are coming, the Russians are fucking with our news, Facebook is messing up our elections, but tech, in the right (perfectly manicured) hands, also has the potential to elevate things that have historically been degraded and dismissed for being girly.

Plus, my nails look really cool.

Sharmadean Reid recently hosted a TNW Answers session with us. You can check it out here.

Read next: How we can save the world by fueling it with our waste