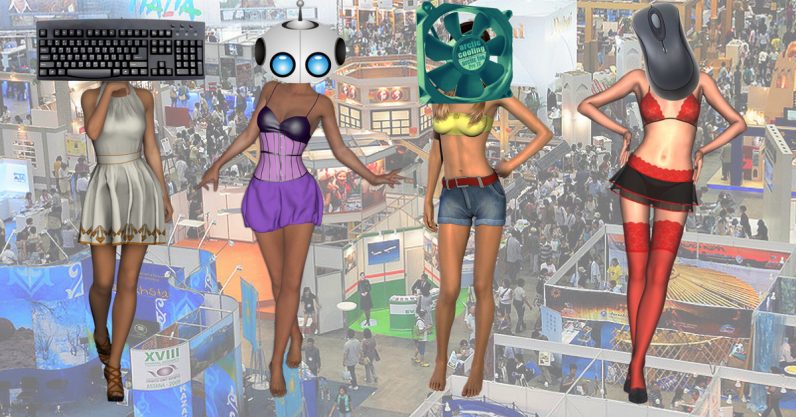 Computex, we need to talk. You’re Asia’s largest IT trade show and have existed for over 30 years. In other words, you’re a dignified statesperson in the tech world. People pay attention to what you do and the way you run your conference affects the rest of the tech industry.

So, answer us this: Why do your exhibitors’ stands overflow with barely dressed women?

We expected to visit Computex Taipei to be filled with innovative products, groundbreaking startups, and lots of stuff put on the blockchain we didn’t know could be on it. Yet it was filled — and we mean to the rafters filled — with women dressed in teeny bikinis, revealing schoolgirl outfits, and everything in between.

The practice of using these ‘booth babes’ to market products has become a rare(r) sight at tech conferences and shows over the past decade, which makes the abundance at your event even more galling. With two editors/writers from TNW attending Computex this year (one female and one male), we got them to write about their view of the issue, which you can find below.

It’s also important to note that we didn’t include any photos of the women in question in this article. We have no desire to shame them for doing a job, objectify them further, and don’t feel we need prove our point that this practice is really, really shitty.

I’m not here to talk about the rights and wrongs of ‘booth babes,’ because this has been done and done and done. Nor do I want to shame anyone who has chosen this career. Instead, I want to describe my experience as a man (I know, I know) at Computex.

I’ve always found tech conferences to be, for want of a better phrase, a penis parade. Supposedly – according to older generations of techies – the inclusivity of these events has gotten much better over the years and, while the events I’ve visited haven’t been brimming with ballsacks, they’ve always seemed somewhat respectful.

When entering the conference space, one of the first things I saw was a blue-shirted man, handing out leaflets flanked by two women in bikinis.

Well, it didn’t get less weird. There were women in barely any clothing ‘promoting’ products everywhere.

It made me not want to interact or speak with the companies. It made me want to not write about them. Basically, the entire practice made me uncomfortable.

I could rant about why sticking women in sexy schoolgirl outfits so they can promote whatever new dumb shit is on the blockchain is bad. Objectification is bad. But to guess at and critique why another woman chose to take a paying job is futile and, frankly, none of my business. I will, instead, explain why it felt bad for me, a woman who works in tech.

When I walked into the hyper-air-conditioned hall and saw the mass of scantily clad women, I’ll admit I was at first amused. Not in a lighthearted or patronizing way, but it just made me wonder – does this shit actually work?

The truth is, it did. The booths with visible boobs attracted a lot of attention. Men of all ages were posing for selfies with the women, snapping photos of them cheesing it up next to high-tech gaming fans and pretty colored keyboards. Whatever few scraps of fabric the women were wearing were covered in logos. Sex sells.

So, it does work. But for who does it work? Walking around the trade show, it gradually settled in that this conference was not made for me. It literally was not designed for women.

Tech conferences are intimidating enough for young professional women — it’s a complete sausage fest, and the few women there are likely too focused on, you know, their job to start a sisterhood club with you just because you feel out of place. I can’t blame them — the bikini display made me want to put my head down, stick to my work, and get out fast, too.

This was my very first trade show, and while my shock was naive, it did leave me thinking about why tech conferences exist — or, at least, why they should exist. If tech conferences are about selling crap, then well done, Computex. Tits will get you there. But if they’re about displaying innovation, creating a space for professionals to interact and share ideas, then I’d have to say it failed.

I write for a well-known tech blog. I also have a vagina. The former should be enough for me to feel professionally comfortable at an IT trade show. The latter should not negate it.

Does sticking a hot girl in your company t shirt get you attention? Probably. Want to wear a tiny dress? Go for it. But if a trade show is truly about spotlighting innovation, then this seems like the most backwards way to go about it.

Below are a list of all the companies that we saw using ‘booth babes’ at Computex. This is not a extensive list, but we wanted to draw your attention to their names.

Before this though, we wanted to highlight the worst offender we saw at the show: Comino.

Somewhat unsurprisingly connected to the cryptocurrency world, the company makes equipment for mining. To showcase its tech, Comino had a glass box in which women in bikinis danced to loud, awful, faux-club music, while members of the company took selfies in front of it. Like this:

Should you trust a company like that? We doubt it. (Full disclosure, we’ve written about the company in the past, but this was before we were aware of this activity.)

The following also had ‘booth babes’ at their stands:

We got in touch with Computex for a comment on this, but received no response. We’ll update the piece if this changes.

So, Computex, we’re not angry, just disappointed… Ok, we’re a little angry.  As an event organizer ourselves, we know you can put conditions in place to stop this type of behavior from exhibitors at events. Sort it out.