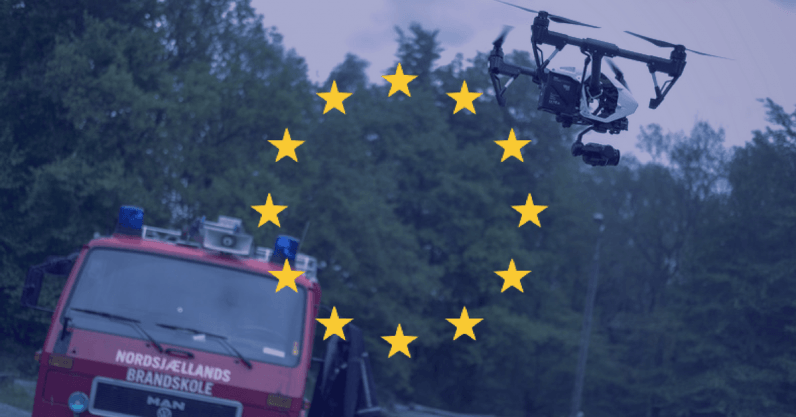 The European Emergency Number Association (EENA) and the Chinese drone manufacturer DJI just announced a new joint pilot project for using drones for emergency services in Europe. The project was announced at the EENA conference in Slovenia and will be the second partnership between EENA and DJI.

The goal of the project, which will take place in Ireland and Wales, is to understand exactly how drones can be used by emergency services and create legal and operational framework — and to set Europe-wide standards to help more countries adopt emergency drones. TNW is in Ljubljana, and we spoke with Alfonso Zamarro, EENA’s Drone Activities Manager, and Romeo Durscher, Director of Public Safety Integration at DJI, to find out more about the pilot project.

We’re bombarded with science fiction-like visions of what tech will be in the near future, but often it can feel like an eternity before what we see becomes ingrained in our daily lives. The truth is that futuristic visions and general implementations of tech won’t become a reality unless there are people willing to do the groundwork — and that’s exactly what DJI and EENA are doing.

The new project is a continuation of EENA’s and DJI’s joint venture in 2016 to 2017 where the first steps where taken to create drone usage guidelines for emergency services by working with early adopters and launching pilot programs around Europe. “Phase II will focus on the next level of integration, testing, and validation of data,” explains Durscher. “Based on phase I, and what we have learned and seen in the field, the drone itself is only a tool to provide better and faster data points. This important information needs to get into the right channels so decisions can be made either on scene or far removed at an incident command center.”

“The future may look even more differently — what if the firefighter on the ground could also tap into all the available data and see an incident from various different perspectives? What if algorithms helped providing suggestions during large scale events for next steps or give incident command data that would normally take hours to get? One thing is clear; both hardware and software solutions will continue to develop based on needs and the capabilities for first responders will increase.”

Durscher’s hopes for the future of emergency services are a grand and refreshingly non-dystopian look at increased drone usage. Even a cynical pessimist like me — that tries to disprove the benefit of drones — can’t argue against how cool it would be to use robots to save human lives. However, what’s truly important is the current ability of emergency drones and how they’ll be used in Europe during the project.

How exactly can a drone save your life?

Zamarro of the EENA says that one of the conclusions of the first phase of the EENA/DJI partnership was the clear benefits drones brought for fire fighters and search-and-rescue teams. Using EENA coordination efforts and emergency service experience — along with DJI’s technical knowledge – they were able to pinpoint where drones can help in these type of emergencies and what needed to be improved, e.g. durability of equipment, how to handle data and stream it to other responders, etc.

“Phase II will go one step further. We aim to understand how drones integrate tactically in those use cases and back it with data. For example: drones are good for search-and-rescue teams, but how can we use a drone in a rescue mission to find victims faster? That’s the level of detail we need to achieve now,” says Zamarro and adds that one of the aims of the second phase will be to compare data from drone teams and non-drone teams to get a concrete data on their effectiveness.

Durscher agrees that firefighting and search-and-rescue missions are currently where drones can do the most to save lives. In search-and-rescue missions they provide an excellent bird’s-eye view and in case of a fire, drones can be used to find hot spots which allow for a more targeted approach to putting it out. But Durscher adds that the possibilities for using drones to save lives only increase with every trial project.

What we are starting to see today is that the early adopters of this technology have realized that this technology can not only be used during an incident — such as a fire or search-and-rescue operation — but it can also be used to gather pre-incident data and post-incident forensics.

Aerial mappings of levees for example can provide baseline data so when a flood hits and causes the water to breach levees, we can produce prediction modules and prevent future flooding, the use of drones has increased in fire prevention applications, such as building and vegetation inspection. And 2D and 3D mapping of car accident scenes allow opening up roads and highways to traffic much quicker than traditional methods.

Hazardous material incidents can also dramatically benefit from this technology as we can gather data safer and faster with less risk to humans and dramatically decrease the time to mitigate.

The first EENA/DJI project resulted in technological advances in drones and it’s likely the second phase might also yield promising results. In the first project DJI used its Inspire 1 drones that were either outfitted with a visible light camera or its DJI/Flir XT thermal camera.

While the Inspire 1 was a huge step forward in drone technology back when it was unveiled in 2014 — and it’s still a workhorse today — DJI has released a series of the Matrice 200 series, which has even more enhanced capabilities. According to Durscher, the technological leap from the Inspire 1 to Matrice 200 was made possible by the many lessons learnt in the first EENA/DJI project.

The Matrice 200 has the capability for dual camera operations; instead of only flying one camera at the time and then having to land to switch to a thermal camera for example, this platform now can fly two cameras at the same time, providing live video feed back to the operator.

In March 2018 we announced the next generation of thermal camera, the XT2, which is two cameras in one body, opening up that second payload port for yet another sensor or tool. We have developed a Search Light that can illuminate an area from up to 100m at night, or a laser pointer that can help pin-point an area of interest.

It’s therefore safe to say that phase II will bring interesting results with its updated gadgets.

The teams in Ireland (Donegal Mountain Rescue Team) and Wales (Mid and West Wales Fire and Rescue Service) will soon start their drone programs. Both of the places were chosen by the DJI and EENA due to the experienced staff and favorable conditions to carry out as many drone-aided emergency services as possible — providing a great dataset for the future..

As to the general objectives/improvements of the new phase, EENA and DJI agree that there’s a lot of headway to be made when it comes to training new pilots and integrating drones in the workflow of emergency services. I mean, you can’t exactly hand a first responder a remote controlled drone and just tell her to go out and save lives. The main objectives can by summed up by three points:

For more information on the first phase of the EENA/DJI partnership, you can access a PDF version of the whitepaper here. And if you get lost in a forest, try waving at the drone above you — it’s trying to save your life.

Read next: Opera Touch is a new one-handed browser for Android (and soon iOS)