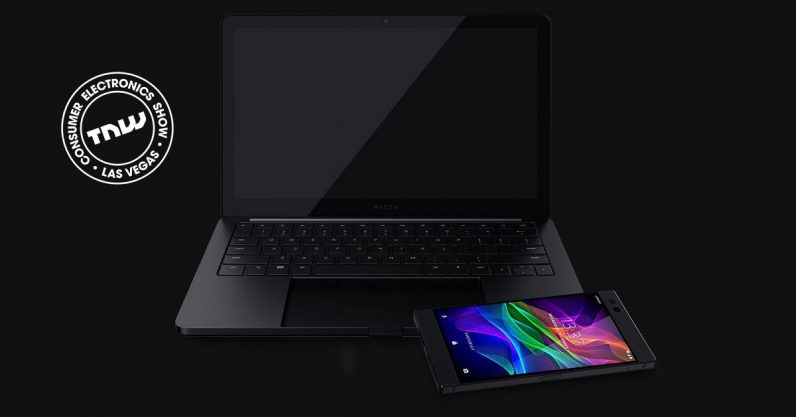 Razer’s Project Linda concept laptop incorporates the Razer phone, literally. The laptop is large, tricked-out dock for the phone which brings Android to a larger screen.

Project Linda is a chassis with a large dock into which Razer smartphone owners can place their phone. At the touch of a button, the phone becomes the laptop’s trackpad and a second screen.

Project Linda comes with a built-in power bank for charging the phone, as well as an audio jack, webcam, speakers, USB for peripherals, and several other things you’d expect from the typical Razer laptop — except it doesn’t function without the phone.

My colleague, Napier Lopez got to test it out at CES and had this to say about the design:

Until you notice the trackpad is actually a smartphone, the laptop seems nearly identical to the Razer’s Blade Stealth, which is to say, it feels like a real laptop. Using the phone as a trackpad was surprisingly natural, other than the fact it doesn’t click. I only had about 5 minutes with the device, but browsing websites felt totally smooth.

Being able to use your phone as a laptop with a keyboard is a bow both to convenience and to accessibility. Ordinarily, I set my phone aside when I want to do more labor-intensive tasks, like typing long stories, or when my eyes are strained from looking at a small screen — problems that’d be nonexistent with a laptop dock like this. I doubt it’d ever be as useful or as powerful as one of Razer’s gaming laptops, but if you don’t need it to be, it’s a nifty innovation.

Napier thought Linda wasn’t so important as similar projects it’s likely to inspire, “It’s clearly a pretty niche product, considering owning a Razer phone is a prerequisite, but even in prototype form it makes a solid case for smartphone-powered laptops in the future.”

Project Linda is still in the experimental phase at the moment with no release date in site. If you want updates, check Razer’s page specifically for the product. If you’re interested in the smartphone itself, it’s available for $699.

Read next: Forget F1 and NASCAR: Robot racing is your new favorite sport