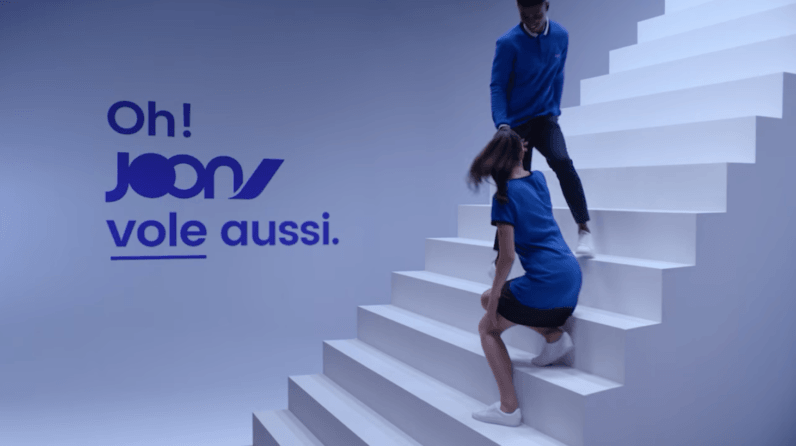 Air France is one of the oldest names in aviation. It’s also one of the stuffiest; you don’t instinctively associate it with a hip, young clientele right? It’s perhaps for that reason it’s launching a spin-off airline, called Joon, aimed squarely at millennials. Check out the magnificently cringeworthy launch video below.

So, what does an airline for millennials look like? A release, issued by Air France earlier today, unveiled some details about the service. The company was eager to big-up its partnerships with the likes of Airbnb and Waynabox, allowing passengers to book experiences and trips alongside their flights.

It also said that it would come with on-device content streaming, as well as USB-charging. Neither is particularly novel. Most long-haul airlines have USB-chargers built into their seats, and streaming is an increasingly seen as an affordable alternative to heavy, old-school seatback in-flight entertainment (IFE) systems.

The weirdest thing is that business class passengers on long-haul flights are provided with virtual reality headsets. Per the release:

The AlloSky Virtual Reality Headset will be available to Business customers on long-haul flights in collaboration with SkyLights. This new generation headset provides several innovations such as a high-definition screen and a diopter correction to adapt to everyone’s eyes. It can be connected individually to each seat.

The release was coy with details. We don’t know what content will be available. We do know that the headset itself is the product of a partnership between two companies — AlloMind and SkyLights. And it actually looks pretty nifty, bearing a slight resemblance to Geordi LaForge’s visor from Star Trek: The Next Generation.

I’ve only ever heard of one airline offering virtual reality as an amenity before, and that’s Australian flag carrier Qantas, who offered Samsung Gear headsets to first class passengers on select flights. That was in 2015, and from what I can tell, is no longer offered.

Truthfully, I can’t imagine why anyone would escape to the world of VR when they’re flying business class. People pay big bucks to escape the misery of economy, and business class is geared to offer a unique and luxurious experience.

This is something I can attest to personally. I’ve flown Air France’s business class product before, albeit only within Europe. It’s actually pretty good. The food is tasty, and champagne flows freely. I assume it’s even better long-haul, with a lie-flat bed and on-demand entertainment.

While VR is undeniably fun, it’s not something I can imagine using from an altitude of 40,000 ft, especially when you consider the eyewatering price tag associated with business class travel.

And do you really want to be that guy who starts shrieking in the cabin because they couldn’t handle the BASE jumping VR experience they were watching? I didn’t think so.

We’ve reached out to Air France for comment, and will update this piece if we hear back from them.

UPDATE: This piece was updated with further details about the headset.

Read next: 3 companies that are shaking up traditional markets thanks to blockchain