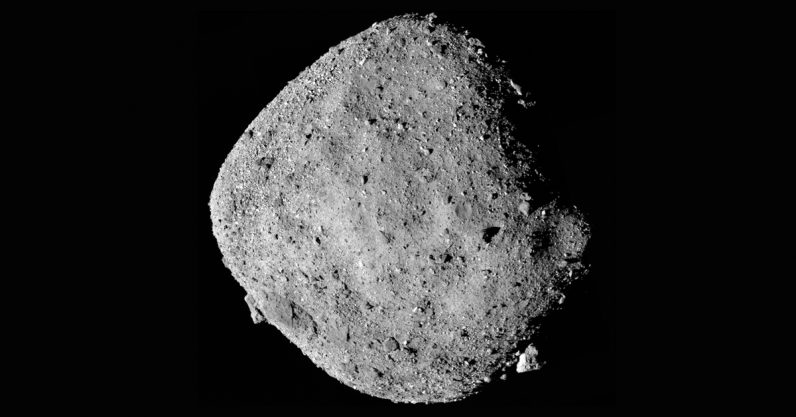 Researchers at NASA and in Japan have found HMT — a key ingredient for life — trapped inside an asteroid. This chemical is used in building other organic materials, including some of the molecules which drive the mechanisms of life.

Life on Earth is based on organic materials, built on carbon and hydrogen. These chemicals often also contain oxygen, nitrogen, and other elements.

Three different carbon-rich meteorites were found to contain a prebiotic organic molecule called hexamethylenetetramine (also called hexamine, or HMT). This chemical, used to treat urinary infections as well as in the manufacture of blasting caps, is thought to play an important role in the development of organic material within asteroids.

Formaldehyde and ammonia? Must smell lovely.

The development of amino acids and sugars often relies upon formaldehyde and ammonia. However, both these chemicals easily break down in the harsh environment of space. This led scientists to question how significant quantities of organic material found in asteroids may have formed. This new study may hold the answer.

“HMT does not vaporize even at room temperature, and it can produce both molecules if it is heated with liquid water inside asteroids. Finding HMT in meteorites confirms the hypothesis that it is a stable source for ammonia and formaldehyde in asteroids,” Yasuhiro Oba of Hokkaido University in Japan stated.

Early in the history of the Solar System, asteroids were heated by collisions and the decay of radioactive elements. With enough heating, HMT within asteroids containing liquid water could have broken down into formaldehyde and ammonia. These could, in turn, can react to produce amino acids and other complex organic molecules.

Within living systems, some amino acids are used to make proteins. These are found in hair and nails, and they regulate and aid chemical reactions.

The presence of organic compounds in asteroids has been well-studied. However, the process by which these chemicals were formed remains a question, driving research.

Laboratory experiments show that combinations of water, ammonia and methanol in conditions similar to those in space can produce organic compounds — including HMT.

One glass of HMT, on the rocks!

Interstellar ice (containing water and ammonia) can also contain significant quantities of methanol. Therefore, it would appear that HMT should be common in asteroids containing water. Yet, the chemical has never before been found in asteroids examined under laboratory conditions.

This new study suggests that when hexamine is exposed to conditions typically found in a laboratory, it breaks down. This would explain how researchers would have missed seeing HMT within samples which once contained the material.

Researchers utilized a unique method to extract HMT while minimizing breakdown of the chemical. Using this technique, the team collected samples of hexamine from three bodies which landed on Earth long ago — the Murchison, Murray and Tagish Lake meteorites.

Watch this original interview with Professor Seiji Sugita of the University of Tokyo, researcher on the Haybusa2 spacecraft that just returned the first sample from an asteroid to Earth. (Video credit: The Cosmic Companion)

Our own world is awash in microscopic life, and researchers had to be certain the hexamine seen in the samples was not simply contamination from Earth. The Murchison sample had been stored safely inside a sealed container at the Chicago Field Museum. This care makes this sample the most pristine piece of the Murchison meteorite ever examined for amino acids, reducing the chance of contamination.

Organic materials can be produced by non-biological processes, as well as by lifeforms.

“HMT, which can yield important molecules for prebiotic chemistry such as formaldehyde and ammonia upon degradation, is a likely precursor of meteoritic organic compounds of astrochemical and astrophysical interest,” researchers describe in Nature Communications.

This finding lends evidence to the idea that complex organic materials may have littered Earth from the sky.

We are now at the cusp of being able to examine material from asteroids in laboratories. The first large samples ever of an asteroid — a total of 5.4 grams of material from Ryugu — just recently arrived from the Hayabusa2 spacecraft. Another, larger sample will arrive from the asteroid Bennu, delivered to Earth by the OSIRIS-REx spacecraft in September 2023.

The secrets these missions will uncover remain a mystery — for now.

Read next: Drive more leads and increase sales with the help of this seven-course training bundle