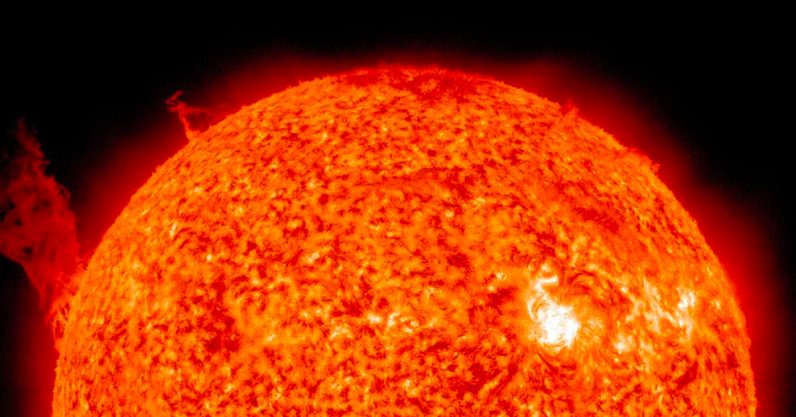 Most people realize our Sun is producing light and heat from the fusion of hydrogen into helium. However, the process of merging together hydrogen nuclei into helium is not as straightforward as it might seem.

Typically, there are two processes by which smaller stars create fusion. The first of these, the proton-proton (pp) reaction is the simpler, as well as the more common, of the two. The second, the Carbon-Nitrogen-Oxygen (CNO) cycle, is thought to be the predominant means of producing energy in hotter, more massive stars.

However, a new study finds neutrinos from the Sun providing the first direct evidence of the CNO cycle taking place deep within our parent star.

“Although on the basis of model calculations we expected the CNO cycle also to occur in the Sun, direct evidence of this has never been obtained before. Only a characteristic neutrino signal can provide conclusive proof that this actually happens — now we have that conclusive proof without a shadow of a doubt,” Michael Wurm, a neutrino physicist at Johannes Gutenberg University Mainz (JGU) and member of the Borexino Collaboration, describes.

For every reaction, there’s a harder-to-remember reaction

The PP reaction, dominant in smaller stars like our Sun, begins with the fusing of two protons (ordinary hydrogen nuclei) into deuterium, containing one proton and a neutron. This reaction releases a positron (an antimatter version of an electron), and a neutrino, and an exceptionally low-mass, uncharged particle.

This deuterium nucleus then merges with a third proton, releasing gamma radiation (this energy then spends hundreds of thousands of years working its way to the surface of the Sun, where we see and feel it as light and heat). The helium nucleus produced this way, short one neutron (3 He), then impacts another 3 He nucleus, releasing a pair of protons, forming the final product — a stable, ordinary helium nucleus (4 He).

The CNO cycle is far more complex. A carbon nucleus with six protons and six neutrons (12 C) impacts with a proton, producing a nucleus of nitrogen and releasing gamma radiation. This form of nitrogen with seven protons and six neutrons (13 N) is unstable, and falls apart, releasing a positron and neutrino. The end product of this reaction, carbon 13 (with an extra neutron) fuses with a second proton, releasing further gamma radiation and producing a nucleus of stable nitrogen (14 N).

When this nitrogen nucleus encounters the third proton in this cycle, gamma radiation is released once again, and an unstable form of oxygen nucleus, 15 O, is produced. When this breaks down, another neutrino, as well as a positron, are released, and 15 N (nitrogen with an extra neutron) results. Finally, the nucleus encounters a fourth positron, releasing a helium nucleus (also known as alpha radiation). The end result of this reaction is stable 12 C carbon, and the process can begin anew.

The PP process dominates in smaller stars like our Sun, while the CNO cycle is prevalent in more massive stars, which contain greater concentrations of elements heavier than helium (known as the metallicity of a star).

Neutrinos produced in these reactions race through space in all directions. But, they almost never react with anything, making detection almost impossible. However, when they are seen, physicists are able to determine if they came from PP or CNO reactions.

If living underground was good enough for the Morlocks…

Located 1400 meters (4,600 feet) beneath the Gran Sasso mountain in Italy, the Borexino detector aims to find these neutrinos, allowing astronomers to understand fusion processes occurring deep inside the Sun. Covered in vast quantities of rock, the detector is well protected from most electromagnetic radiation.

This instrument, opened in 2007, is based on a thin-shelled container holding 280 tons of scintillator fluid, which releases light on the rare occasions when a neutrino interacts with a molecule in the fluid. A similar technique is used in chemistry and physics labs to study radioactive materials submerged in such a fluid.

A few hundred times a day, a flash in the highly-shielded tank reveals the possible presence of a neutrino. The flashes of light are recorded by roughly 2,000 detectors placed around the tank.

One challenge facing physicists is occasional false signals caused by subatomic particles called muons. These arrive from space, and although a large amount of Earth covering the detector stops most of these particles, a percentage makes it through and is detected as false positives in the massive tank. Data analysis is used to eliminate these errors from the data.

“Neutrinos alone, among all the known particles, have ethereal properties that are striking and romantic enough both to have inspired a poem by John Updike and to have sent teams of scientists deep underground for 50 years to build huge science-fiction-like contraptions to unravel their mysteries…”
— Lawrence M. Krauss

The detector has previously seen neutrinos produced in PP reactions, but this marks the first time that neutrino from CNO cycle reactions have been detected.

“Although on the basis of model calculations we expected the CNO cycle also to occur in the Sun, direct evidence of this has never been obtained before. Only a characteristic neutrino signal can provide conclusive proof that this actually happens — now we have that conclusive proof without a shadow of a doubt,” Wurm explained.

The research team calculated that more than 700 million neutrinos produced in CNO reactions pass through every square centimeter of the Earth every second. Still, this is just around one percent of all neutrinos from the Sun which constantly pass through our planet. This matches theoretical predictions which predict the CNO cycle is responsible for roughly one percent of all energy produced by the Sun.

This new study could help astronomers and astrophysicists learn more about nuclear reactions in the Sun, as well as massive stars throughout the Cosmos. Neutrinos could also reveal secrets of the composition of materials in the solar core.

“In the CNO cycle, the fusion of hydrogen is catalyzed by carbon, nitrogen, and oxygen, and so its rate — as well as the flux of emitted CNO neutrinos — depends directly on the abundance of these elements in the solar core. This result, therefore, paves the way towards a direct measurement of the solar metallicity using CNO neutrinos,” researchers describe in an article detailing the study, published in the journal Nature.

From a detector buried under a mountain comes confirmation of ideas about the core of our own Sun, as well as massive stars in far-flung galaxies.

Read next: Bored of your galaxy? Here’s a virtual tour of a million others