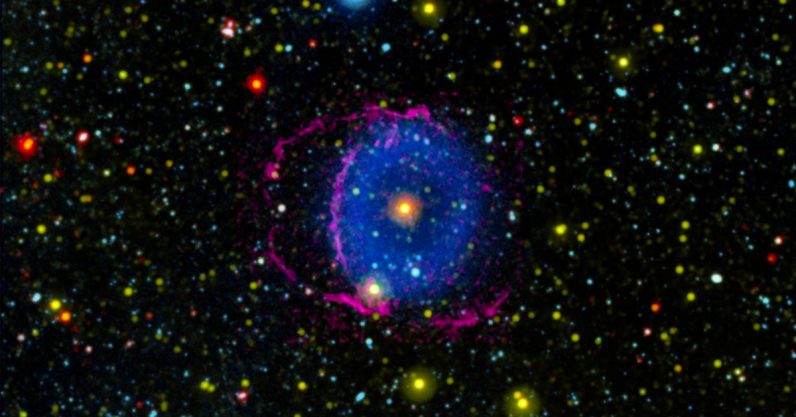 In 2004, the Galaxy Evolution Explorer, an orbiting space telescope scanning distant groups of galaxies, found a bizarre object. Among other oddities, this body appeared to be blue, despite giving off no visible light. Careful observations showed the presence of a pair of rings within the body, earning it the moniker of the Blue Ring Nebula.

Sixteen years of studying this rare object found it to be a ring of hydrogen gas, surrounding what looks like an ordinary star. However, the properties of this object suggest the star at the center of this object is, itself, the product of the merger of a pair of stars. This discovery of TYC 2597–735-1 could open up a new era of understanding the nature of binary star systems.

“We were in the middle of observing one night, with a new spectrograph that we had recently built, when we received a message from our colleagues about a peculiar object composed of a nebulous gas expanding rapidly away from a central star. How did it form? What are the properties of the central star? We were immediately excited to help solve the mystery!” Guðmundur Stefánsson of Princeton University stated.

It takes two to tango

Unlike our own Sun, most stars in the Milky Way are found in binary systems, dancing with another star around their common center of gravity.

“Stellar mergers are a brief but common phase in the evolution of binary star systems. These events have many astrophysical implications; for example, they may lead to the creation of atypical stars… Although a handful of stellar mergers have been observed directly, the central remnants of these events were shrouded by an opaque shell of dust and molecules, making it impossible to observe their final state,” researchers wrote in an article in Nature detailing the study.

In systems where stars are close enough can result in a collision between the stars, merging the bodies together into one massive star.

“Purple haze all in my brain… Lately things, they don’t seem the same
Acting funny, but I don’t know why… ‘Scuse me while I kiss the sky”

Orbital energy once present in the former stars results in the ejection of large quantities of material from the newly-formed body.

Three eyes are better than two

Astronomers went to work studying the Blue Ring Nebula, using a pair of 10-meter telescopes — the HIRES optical spectrograph at the Keck Telescope in Hawaii, and the near-infrared Habitable-zone Planet Finder attached to the Hobby-Eberly Telescope in Texas.

Analysis revealed TYC 2597–735–1 is the product of a stellar merger that took place thousands of years ago.

The Blue Ring Nebula offers astronomers a unique target to study — a composite star caught still settling down from its birth in a cathartic stellar merger.

Read next: Facebook said It would ban holocaust deniers. Instead, its algorithm provided a network for them