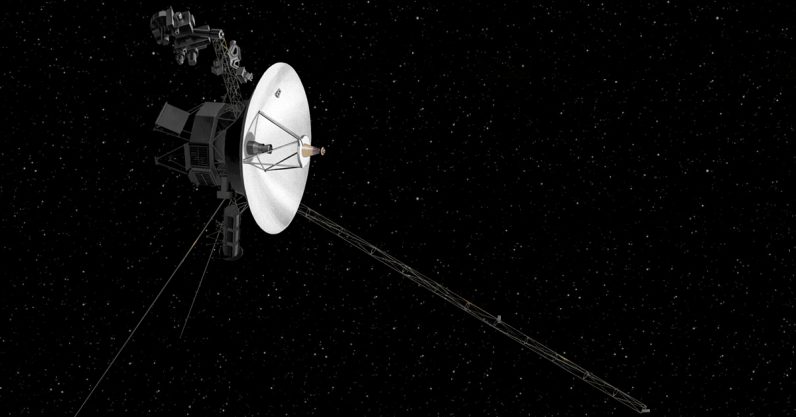 NASA recently made contact with the Voyager 2 spacecraft for the first time in months. This ultra-long distance call was made using the only telescope in the world capable of communicating with the distant interplanetary explorer.

Voyager 2, launched August 20, 1977, is now racing through space just beyond the edge of the Solar System.

“On Oct. 29, mission operators sent a series of commands to NASA’s Voyager 2 spacecraft for the first time since mid-March. The spacecraft has been flying solo while the 70-meter-wide (230-foot-wide) radio antenna used to talk to it has been offline for repairs and upgrades. Voyager 2 returned a signal confirming it had received the “call” and executed the commands without issue,” NASA reports.

If you listen closely…

Just outside Canberra, Australia, NASA’s Deep Space Station 43 (DSS43) radio telescope is the only instrument in the world with a transmitter capable of sending commands to the distant spacecraft. However, scientific and health data was still received from Voyager 2 by other radio telescopes during this time.

Built in 1972, this 70-meter wide radio telescope is the only instrument of its size in the southern hemisphere.

“Deep Space Station 43 (DSS-43) was constructed in 1969 to 1973 as a 64-meter diameter antenna. The 64-meter antenna was more than six times as sensitive as DSS-42, the original 26-meter at the Complex. Therefore DSS-43 could communicate with spacecraft at greater distances from Earth as the signal became weaker,” the Deep Space Network describes.

Call when you get work!

Because of the path Voyager 2 took through the Solar System, the vehicle is unable to communicate with radio telescopes in the Northern Hemisphere.

“The spacecraft’s flyby of Neptune in 1989 set it on a course below the elliptic plane that eventually took it to interstellar space on November 5, 2018. In 1998, engineers switched off the spacecraft’s nonessential instruments to conserve power. Data from at least some of the six instruments still in operation should be received until at least 2025,” NASA reports.

In March, NASA began upgrading the DSS43 telescope, including the installation of a new, three-ton X-band frequency cone that needed to be hoisted 20 stories in the air. Installation of the cone was completed in May, providing increased sensitivity for mission engineers using the telescope.

Even traveling at the speed of light, it took radio signals 17 hours to reach the distant vehicle, and the same amount of time to return.

Engineers hope upgrades will be completed on the DSS43 telescope by February 2021.

These 70’s spacecraft are far out!

The 1970’s saw the launch of four spacecraft destined to travel outside the Solar System. The Pioneer 10 and 11 missions were followed by Voyager 1 and 2. Three of these are headed in the same direction as the Sun orbits around the galaxy, while Pioneer 10 is headed in the opposite direction.

The untold want, by life and land ne’er granted, Now, Voyager, sail thou forth, to seek and find. ― Walt Whitman, Leaves of Grass

Voyager 2 is the only spacecraft to have ever visited all four outer planets of our Solar System — Jupiter, Saturn, Uranus, and Neptune.

“A gravity assist at Neptune shot Voyager 2 below the plane in which the planets orbit the Sun, on a course out of the solar system,” NASA describes.

The intrepid explorer officially reached interplanetary space — where particle pressure from the Sun is overwhelmed by the interstellar medium — on November 5, 2018.

NASA will continue listening in on Voyager 2 and its companion until batteries finally fall dead, silencing the spacecraft, leaving the hardy explorer forever adrift in the silent void.