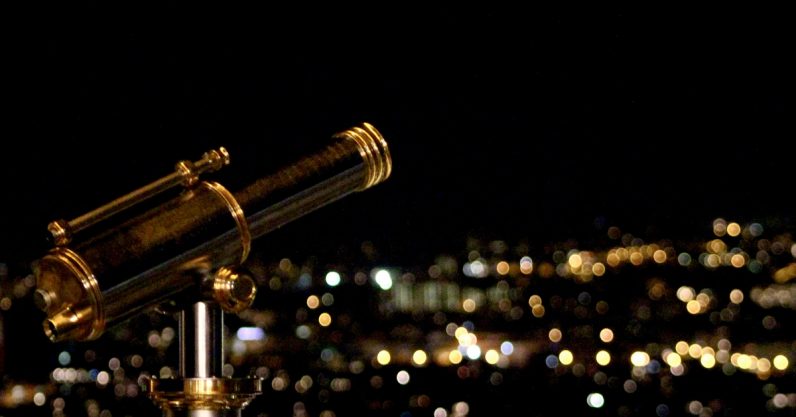 All the planets in the Solar System are visible in the night sky this week, making a beautiful sight for stargazers. Even the outermost planets — Uranus, and Neptune (plus the dwarf planet Pluto) can be seen by observers using telescopes.

Jupiter and Saturn can easily be found in the southwestern region of the evening skies, while everyone’s favorite ex-planet, Pluto, can be found by skilled amateur astronomers. Venus and Mercury, huddling close to the Sun, can be seen just before sunrise. Mars, meanwhile, is spending its time with our two ice giants — Uranus and Neptune.

The southeastern sky, a little after sunset, offers Mars — glowing brilliant red. And, the two planets discovered in the age of telescopes — Uranus and Neptune — can be found straddling the Red Planet.

Using a telescope or binoculars, Uranus can found about 13 degrees above Mars, and 20 degrees north (left) of the Red Planet. It will appear as a small, light blue disk in most telescopes or binoculars.

Neptune — dimmer, darker, and harder to find than Uranus, can be seen 11 degrees below, and 31 degrees south (right) of Mars. Finding this planet can present a real challenge for amateur astronomers.

These two largest planets are currently just a few degrees apart from each other, and they coming together as seen from Earth. On December 21, these two worlds will be the closest they will be seen until March 2080.

Saturn is the most distant planet visible with unaided eyes. However, using binoculars or a telescope allows viewers to see that planet’s magnificent series of rings.

Amateur astronomers should find Jupiter first, shining brightly in the southwestern sky, soon after sunset. Just a few degrees away from that world is Saturn, shining less brightly, with a distinctive yellow hue.

Amateur astronomers will need dark skies and a telescope of at least 12″ diameter to find Pluto, but this lovable underdog is currently hiding in the darkness less than a degree (two full Moons) below and to the north (left) of mighty Jupiter.

For you, early birds (what’s so great about worms, anyway?)

Venus, the third-brightest object in the sky after the Sun and Moon, shines just before dawn. This world is roughly the same size, and has the same mass, as Earth. But, sulfuric acid rain, crushing pressures, and temperatures hot enough to melt lead make this a hellish world — except, perhaps, within a temperate zone found in its upper atmosphere.

This world shines exceedingly bright in the southeastern sky, and should be an easy find for anyone with a clear view to the southeast.

Mercury, 70 times dimmer than Venus, can be found below Venus, closer to the horizon. This world is usually visible to the naked eye, but binoculars or a telescope makes finding Mercury easier to find. This planet can be seen (under dark skies) sitting about 12 degrees below, and four degrees north (to the left) of Venus.

As November progresses, Mercury will grow brighter each day, and it will be seen higher above the horizon.

Although this planet is the closest to the Sun, it is — on average — cooler than Venus, due to the thick atmosphere surrounding its larger companion, creating a runaway greenhouse effect.

You just couldn’t planet this way…

“Sometimes I wonder if the planets are still up there, still aligned, still managing to get along after all this time. Maybe we could learn a thing or two from them.”― Tahereh Mafi, Ignite Me

The relatively rare alignment of all the planets happening this week offers amateur skygazers a chance to view these planetary wonders of our solar system.

One trick when searching out targets in the sky is to hold out a fist at arm’s length. This covers roughly 10 degrees, while a single finger at arm’s length is approximately two degrees from side to side.

The Moon can drown out dim objects with light, but our planetary companion will become dimmer (and rise later) each night, until November 15. Then, the Moon will grow brighter until the end of the month.

While we look up at seven of the eight planets in the night sky, let’s also take a moment to look down, and remember the only planet we know of capable of supporting life — the Earth.