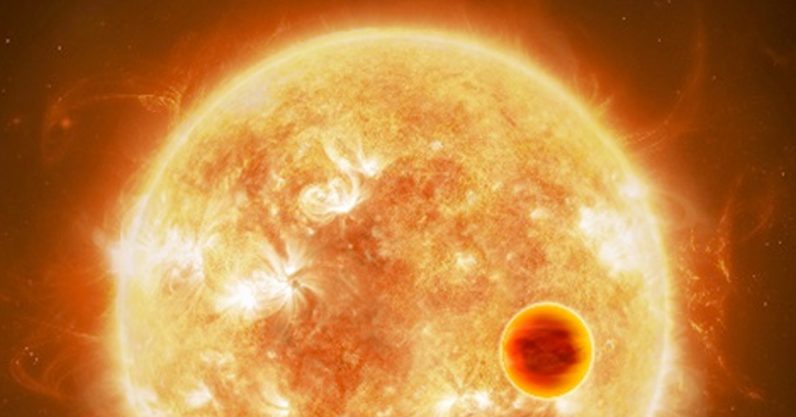 The exoplanet LTT 9779b is far more massive than our own world, and the world is nearly five times larger. Temperatures on its surface put Venus — the hottest planet in our solar system — to shame. This exoplanet, discovered just last year, is so extreme it should not exist — at least not for long.

Hot Neptunes are — theoretically — worlds the size of Neptune or slightly larger than Neptune, orbiting close to their parent stars. However, such planets were thought to be unstable, as the atmospheres would be driven off by heat from the local star.

“This planet is so intensely irradiated by its star that its temperature is over 3,000 degrees Fahrenheit and its atmosphere could have evaporated entirely. Yet, our Spitzer observations show us its atmosphere via the infrared light the planet emits,” Ian Crossfield, assistant professor of physics and astronomy at the University of Kansas stated.

Much like the more-familiar hot Jupiters, hot Neptunes are highly gaseous worlds, but they are not nearly as massive as their larger cousins.

Roughly 30 times more massive than Earth, LTT 9779 b orbits six times closer to its parent star as the Earth does from the Sun. The star at the center of this system is roughly three-quarters as massive as our own sun, and LTT 9779 is just slightly smaller than our local star.

Orbiting close to its sun, in a region known as a Neptune desert, a year on LTT 9779 b lasts less than 24 hours. But, that is just one of the extreme conditions in this bizarre world.

“This planet doesn’t have a solid surface, and it’s much hotter even than Mercury in our solar system — not only would lead melt in the atmosphere of this planet, but so would platinum, chromium, and stainless steel,” Crossfield said.

This exoplanet was one of the first Neptune-sized worlds discovered by the orbiting Transiting Exoplanet Survey Satellite (TESS).

In the first study of the spectra of any world discovered by TESS, researchers also created the first temperature map ever developed of a TESS planet with an atmosphere.

“Infrared light tells you the temperature of something and where the hotter and cooler parts of this planet are — on Earth, it’s not hottest at noon; it’s hottest a couple of hours into the afternoon. But on this planet, it’s actually hottest just about at noon,” Crossfield stated.

In the video above, an introduction to exoplanets. (Video credit: National Geographic)

The planet was found to be cooler than expected, suggesting the atmosphere of LTT 9779b is likely cloudy, quickly radiating heat back to space.

Neptune-sized worlds seen this close to their parent stars are usually former Jupiter-sized worlds or massive rocky planets that have long ago lost their atmosphere.

“Although most of the dozens of phase curve measurements made to date are of large, massive hot Jupiters, there is considerable interest in probing the atmospheres of the smaller planets that are the more typical end product of the planet formation process. One such planet that is favorable for these studies is the ultra-hot Neptune LTT 9779b, a rare denizen of the Neptune desert,” researchers write in an article published in the Astrophysical Journal Letters October 26.

As technology advances, astronomers are starting to understand the atmospheres of smaller worlds. Several mysteries surrounding LTT 9779b and hot Neptunes remain for astronomers.

“How is this planet able to retain its atmosphere? How did it form in the first place? Was it initially larger but has lost part of its original atmosphere? If so, then why is its atmosphere not just a scaled-down version of the atmospheres of ultra-hot larger exoplanets? And what else might be lurking in its atmosphere?” Crossfield questions.

Read next: Dear Nissan, why won’t you replace this lovely Canadian's Leaf battery?