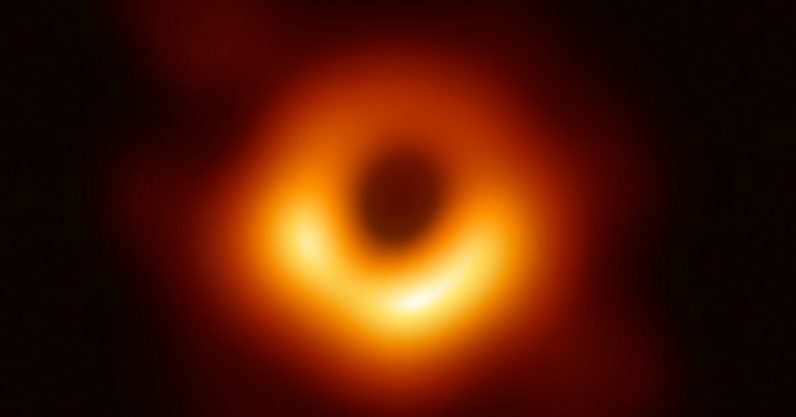 The M 87 black hole, the first body of its type ever photographed by astronomers at the Earth Horizon Telescope, shows an unusual glitter…

The first image of a black hole released in 2019 showed the body at the center of the galaxy M87 to look almost exactly as Albert Einstein predicted a century before.

A new analysis of data from that study sheds additional light on the lightless object — The ring is glittering.

“The results announced in April 2019 show an image of the shadow of a black hole, consisting of a bright ring formed by hot plasma swirling around M 87*, and a dark central part, where we expect the event horizon of the black hole to be,” states Maciek Wielgus, astronomer at Harvard University.

The Earth Horizon Telescope (EHT), a global network of radio telescopes, provides astronomers an instrument capable of recording images with resolutions as detailed as that taken by an instrument as large as Earth. This array first recorded limited data from the M87 black hole in 2009, and other images were collected through 2013.

The 2019 image was developed from just one week of data collection in 2017. This limited time span did not allow astronomers to see how the ring evolves over time.

An international team of researchers embarked on a study of this archival data, combining it with the wealth of information developed from the 2017 observations.

However, the older data is far less extensive than the images seen in 2017. This required researchers to use statistical and geometrical modeling to fill in some gaps in the archival data.

The analysis revealed the black hole in M 87 behaves exactly as theoretical physics predicted for a black hole of 6.5 billion solar masses.

“Do you realize that if you fall into a black hole, you will see the entire future of the Universe unfold in front of you in a matter of moments and you will emerge into another space-time created by the singularity of the black hole you just fell into?” Neil deGrasse Tyson

While the size of the ring remains constant, fine details in the ring, as well as its orientation, change over a period of several years. Studying these changes can help astronomers learn more about the changing shape of the accretion ring surrounding the black hole.

Future studies will provide greater detail in our knowledge of the black holes near the center of the massive galaxy, as well as its innermost jet.

“The monitoring of the time variable structure of M87 with the EHT is a challenge that will keep us busy over the next few years. We are working in the analysis of the 2018 data, and preparing newer observations in 2021, with the addition of new sites such as the NOEMA Observatory in France, the Greenland Telescope, and Kitt Peak in Arizona” stated Anton Zensus, Director at the Max Planck Institute for Radio Astronomy and Founding Chairman of the EHT Collaboration Board.