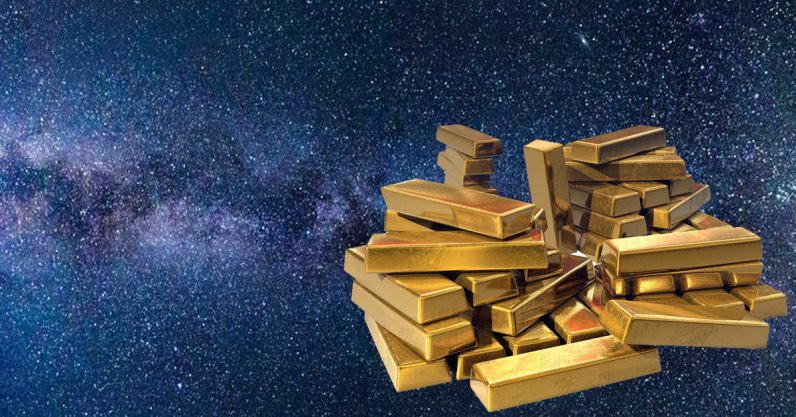 Neutron star collisions were thought to make much of the gold in the Universe, but something else is making a lot of the precious metal…

In 2017, astronomers witnessed a collision between two neutron stars — the ultradense corpses of massive stars. The analysis seemed to reveal the formation of all elements heavier than iron — including gold — are forged in these titanic collisions.

A new study shows these collisions can not deliver anywhere near enough gold to account for the concentrations we see around the Cosmos.

“Neutron star mergers did not produce enough heavy elements in the early life of the Universe, and they still don’t know, 14 billion years later,” said astrophysicist Amanda Karakas of Monash University and the ARC Centre of Excellence for All Sky Astrophysics in 3 Dimensions (ASTRO 3D) in Australia.

When atoms first formed after the Big Bang, only hydrogen and helium (together with a smattering of lithium) were produced. Everything else was forged in the nuclear furnaces of massive stars, or in the titanic explosions of stellar supernovae.

Stars like the Sun spend most of their lives balanced between gravitational forces pulling the body inward and the outward push of thermonuclear reactions at its core.

In a little over four billion years, our Sun will run out of available hydrogen and will shrink. Increased pressures at the core of the Sun will result in helium fusing for the first time, and our parent star will expand into a red giant, swallowing Mercury, Venus, and (possibly) Earth.

Stars significantly larger than the Sun can go through several of these cycles, each producing heavier and heavier elements. When iron (number 26 on the periodic table) is produced, any further fusion requires more energy to produce than is gained from the reaction, and thermonuclear reactions at the core fail, losing their battle against gravity, and the star collapses.

Massive stars can erupt into a powerful supernova, producing elements heavier than iron — including zinc, tin, and gold. When they settle, these events can leave behind a black hole or an ultra-dense neutron star.

Stars with masses less than eight times greater than the Sun were found to produce roughly half the elements lighter than iron, including carbon, nitrogen, and fluorine. More massive stars form the majority of the oxygen and calcium in the Universe, both of which are essential to life.

But, these supernova eruptions could not account for the amount of gold in the Universe, and astronomers believed collisions of neutron stars might fill the gap. This new study shows that even these events do not produce enough gold to explain the concentrations of gold we see around the Cosmos.

“The Universe didn’t make them fast enough to account for their presence in very ancient stars, and, overall, there are simply not enough collisions going on to account for the abundance of these elements around today,” Karakas explains.

I find magnets to be attractive

Researchers postulate magnetorotational supernovae may be responsible for the production of much of the gold we see around us today. These events take place during the collapse of massive, fast-spinning stars with powerful magnetic fields.

These conditions can allow nuclei in atoms to absorb neutrons more quickly than they decay, triggering the production of heavy elements through the r-process of nuclear fusion. Looking at stars with masses between 25 and 50 times greater than the Sun, investigators suggest that if just a small percentage of these stars are magnetorotational, this process could account for the excess gold in the Universe.

“Ô, Sunlight! The most precious gold to be found on Earth.”
― Roman Payne

Earlier research showed another form of stellar eruption, collapsar supernova, can produce heavy elements. (These events form a black hole from the collapse of a rapidly-rotating dying star with a mass more than 30 times that of the Sun).

Researchers found less gold among the stars than they expected, as well as more silver than predicted. This could mean that ideas of the formation of elements may still need to be revised.

This article was originally published on The Cosmic Companion by James Maynard, founder and publisher of The Cosmic Companion. He is a New England native turned desert rat in Tucson, where he lives with his lovely wife, Nicole, and Max the Cat. You can read this original piece here.
Astronomy News with The Cosmic Companion is also available as a weekly podcast, carried on all major podcast providers. Tune in every Tuesday for updates on the latest astronomy news, and interviews with astronomers and other researchers working to uncover the nature of the Universe.

Read next: Why Twitter's image cropping algorithm appears to have white bias