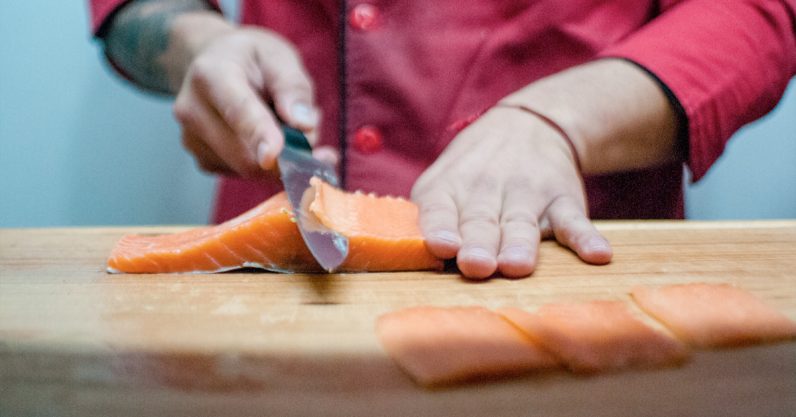 Though asthma affects almost 340 million people worldwide, there is still no cure. The respiratory disease frequently develops in childhood and can cause asthma “attacks” where the lungs become inflamed and the airways constricted, causing breathing difficulty and wheezing. These attacks are caused by a number of factors, including pollution, allergens, and smoking.

The condition is often treated by inhaling a bronchodilator drug called a beta agonist, such as Ventolin. During an asthma attack, inhalers bring beta agonist into the airways. This causes the muscles in the airway to relax, allowing the patient to breathe more easily. But this type of medicine doesn’t work very well for everyone – and there are limited other options for medicines that can be used to treat acute asthma attacks.

But while researching the health benefits of eating “oily” fish such as salmon and mackerel, we found something surprising: omega-3 fatty acids (typically found in such fish in high levels), and more directly medicines that mimic some of the actions of omega-3 fatty acids, could potentially be used to help treat asthma.

Omega-3 fatty acids have many health benefits and generate them in a number of ways, including by limiting inflammation. This is because they interact with and stimulate a protein called “free fatty acid receptor 4.” This protein is present on the surface of certain cells that control the amount of sugar in the blood. As elevated blood sugar is often associated with diabetes, medicines that activate free fatty acid receptor 4 have been considered as a possible new treatment for type 2 diabetes.

One of the joys of being a research scientist is that chance observations can lead to new insights in completely different areas to those you were initially studying. Free fatty acid receptor 4 is typically located in the gut and on white fat cells. But when our team examined where else in the body it might be located, we were surprised to find large numbers of the receptor in the lungs of both mice and humans. We reasoned that if it was there, it must have a job to do.

[Read: Here’s why you’ve got cravings even though you’re not hungry]

We then wanted to know whether these compounds also worked effectively if we induced an asthma-like state in the mice. We did this by making them breathe the air-pollutant ozone, or making them inhale cigarette smoke. Both of these are known to induce asthma attacks in humans. Again, we saw that in the mice that had free fatty acid receptor 4, the proto-medicines opened up the airways. They had no effect in mice that did not have the receptor.

Of course, mice are not humans – and if our initial observations are to have the potential to point towards a new treatment for asthma and other diseases that affect the airways such as chronic obstructive pulmonary disease, we needed to show that free fatty acid receptor 4 is also present in human lungs.

Using tissue samples from human lungs, we found that free fatty acid receptor 4 was also present – and that the proto-medicines which activate the receptor were able to relax the human lung and airways.

Now, we’ll need to show that such treatments are equally effective in airway tissue from patients suffering from asthma, chronic obstructive pulmonary disease, or other related diseases. We’ll need to show that we can produce improved versions of the proto-medicines that will be safe for use. It will also be necessary to demonstrate that they will be effective in alleviating the broncho-constriction than leaves people struggling for breath.

All interesting possibilities, considering we started out by wondering how eating a portion of salmon for dinner might be good for you.