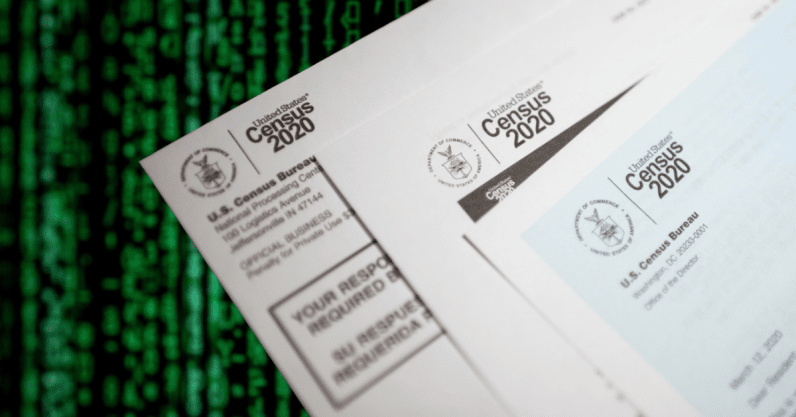 The U.S. Constitution mandates that every 10 years the Census Bureau count every person living in the United States. The results have huge consequences and are used to draw congressional districts and allocate federal funding for things like education, hospitals, roads, Medicare, and Medicaid.

The census has continuously adopted new technological tools to make the process easier, cheaper, and more accurate. In 1890, census takers made use of some of the first tabulating machines, and the Census Bureau purchased UNIVAC I, the first computer commercially available for civilian use, in 1951.

This year, for the first time, the bureau is aiming to go predominantly digital. The biggest motivation: cost savings. According to the U.S. Government Accountability Office (GAO), the cost of the census has doubled on average every decade since 1970. The cost for 2010 was $12.3 billion. This year, digital improvements have helped the Census Bureau save on address canvassing operations and printing costs, though this count is still projected to be the most expensive census ever, topping $15 billion.

But 2020 hasn’t shaped up exactly as anyone was planning, including for the Census Bureau. The agency is contending with privacy concerns surrounding its digital push, worries about online fraud, and a climate of fear that many worry will discourage people in immigrant communities from responding. And then there’s the timing: The 2020 census officially kicked off March 12, just a few days before the first pandemic stay-at-home orders went into place in the U.S.

So what’s different about this year’s census? A lot. Here’s a rundown.

What does “digital Census” mean?

For more than a century, the Census Bureau collected data by sending people out to get answers in person from every household in America. In 1970, the bureau transitioned to paper questionnaires and mailed forms to most households. Now, the census is hoping most people will fill in the survey online.

The bureau first tested out online responses in 2000. Few households took advantage (74 percent chose the mail-in option instead). In 2010, the bureau decided not to make the internet response a priority because its research indicated that not enough people would use the option to make it worth the investment. The bureau was also concerned it couldn’t adequately protect user data.

The 2020 census is the first time the bureau has widely promoted the online option.

In mid-April the census mailed out questionnaires to households that hadn’t yet responded online. For households that still don’t respond, a census representative (known as an  “enumerator”) will knock on the door and collect answers in person.

The census is employing other new digital tools this year. The bureau used satellite imagery and geospatial mapping to identify and verify addresses and has equipped enumerators with smartphones that give them better data about which houses to visit and in what order.

Has the Census resolved concerns about digital privacy and fraud?

The Census Bureau, which is a nonpartisan, independent government agency, is legally obligated to protect personal information. Title 13 of the U.S. Code specifies that while the bureau can collect information to publish statistics, it can’t share that information with landlords, local authorities like the police, or with other government agencies like ICE. Private information is never published, and individual identifiers like names, addresses, Social Security numbers, and phone numbers are never disclosed. Census workers are sworn to uphold these privacy measures, and violating Title 13 is a federal crime.

But the census is far from perfect. The GAO noted in February that, despite making major strides, the bureau was slow to respond to cybersecurity issues.

In an email, Zack Schwartz, division chief of the Communications Directorate of the U.S. Census Bureau, wrote that the Census Bureau takes “extraordinary steps to protect the confidentiality of your response. By law, your responses cannot be used against you. There are no exceptions.”

When it comes to online fraud, the bureau won’t disclose all the measures it’s taking, but a few are public.

The online questionnaire only accepts responses from IP addresses in the United States, says Maria Filippelli, a public interest technology census fellow at the New America Foundation. She says the bureau watches for certain behaviors that would indicate that responses are being filed automatically or by bots.

When people fill out the questionnaire, those answers are encrypted twice: once when the user hits “send” in the online portal, and once when they land in the census’s database.

“That makes it much more complicated to potentially try to hack into,” says Filippelli.

The smartphones that enumerators use also encrypt data and require two-factor authentication.

For the first time, the Census Bureau will use differential privacy when the agency publishes the 2020 results and statistics. With more and more data out in the world, it’s possible to combine data sets and ultimately figure out individuals’ identities, even if that data is presented without personal identifying information. Differential privacy is a technique that introduces a level of mathematical randomness into the dataset. The census can tell researchers how much “noise” is in the set, so they can compute an error rate, but no one will be able to tell which data originates from a real person and which numbers are random.

A climate of fear and a pandemic

Despite the pandemic and early confusion about immigration questions, data is rolling in.

In 2018 the Trump administration announced it wanted to add a citizenship question to the census, a move that would drive down participation by immigrant families, drive up the cost of the census, and make the count less accurate, according to an analysis done by the Census Bureau. Ultimately, the Trump administration dropped its attempt to add the question, but public fear persists.

As of July 1, nearly 62 percent of known households had already responded, and nearly 50 percent of those responses came through online forms. That’s just slightly lower than the 2010 final self response rate of 66.5 percent.

But response rates are uneven. Early reports from California to Pennsylvania and Washington, D.C., found that in communities that are traditionally considered “hard to count”—those who live in rural areas, non–English speakers, immigrants, people of color, and low-income communities—response rates are particularly low.

“When we were gearing up for a lot of this pre-COVID, there were a lot of support systems in place,” says Filippelli. The bureau partnered with libraries, churches, and community organizations that could provide computer access to residents and encourage them to fill out the form. But when the pandemic hit, all those locations closed, exacerbating the digital divide.

The pandemic has made it harder to count the homeless and people living in congregate settings like nursing homes and prisons, which have been hard hit. It’s also forced the census to come up with new ways to count college students, who many college towns depend on to get adequate federal and state funding.

Some door-knocking campaigns are starting back up this month, but the resurgence of the virus makes it more difficult to get an accurate count.

“On a daily basis, the environment for carrying out and finishing this census is shifting beneath the Census Bureau’s feet,” said Terri Ann Lowenthal, a consultant who is on Connecticut’s Census Complete Count Committee. “It is very hard to take a census when your best-laid plans are changing so rapidly.”

The Census Bureau has extended the self-response period so people have until Oct. 31 to send in their questionnaires, either online or by mail, or answer them by phone. Filippelli says she’s still hopeful this year will be successful: “Hard to count communities still have low response rates, but we still have four months to get out the count.”

This article was originally published on The Markup by Sara Harrison and was republished under the Creative Commons Attribution-NonCommercial-NoDerivatives license.

Read next: How to reach the right state of mind before a mission to Mars, according to an astrophysicist