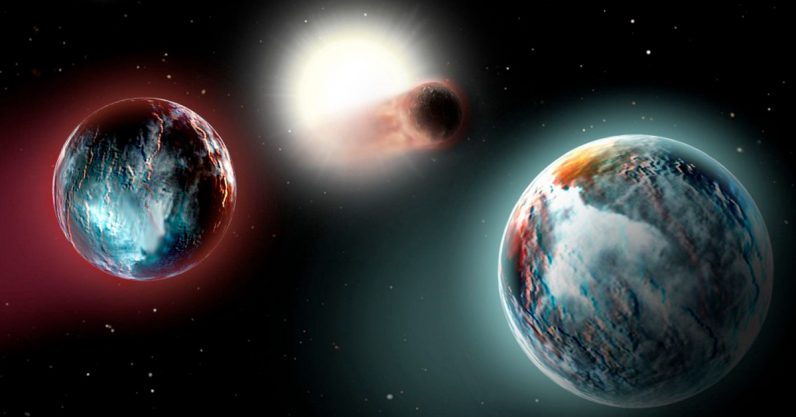 The V 1298 Tau star system contains four young planets, orbiting close to their parent star, where they are baked in X-ray radiation.

Orbiting the young star V 1298 Tau, more than 350 light-years from Earth, at least four planets wind their way around their orbits in the developing solar system. These worlds huddle close to their stellar companion, which bathes the worlds in X-ray radiation.

This pressure from the star likely strips the innermost pair of these worlds of any atmosphere which might develop, leaving them as bare balls of rock. The outer two worlds, however, may have climates that are far more complex.

These planets get more X-rays than Evel Knievel

The X-ray radiation streaming from V 1298 Tau could be as much as that put out by 10,000 stars like our own sun. This output easily strips away any atmospheres and oceans that may have formed on worlds close to these stars.

How those stellar conditions affect planets over billions of years is a question investigated by a team of researchers at the Leibniz Institute for Astrophysics (AIP) and the University of Potsdam in Germany.

“X-ray observations of stars with planets are a key puzzle piece for us to learn about the long-term evolution of exoplanetary atmospheres,” describes Dr. Katja Poppenhäger, of AIP.

How planets respond to that amount of radiation depends on several factors, including the distance between a planet and its parent star, as well as the mass and density of the world.

“We estimate the radiation-driven mass loss of the exoplanets and find that it depends sensitively on the possible evolutionary spin-down tracks of the star as well as on the current planetary densities. Assuming the planets are of low density due to their youth, we find that the innermost two planets can lose significant parts of their gaseous envelopes, and could be evaporated down to their rocky cores,” researchers described in an article published in Monthly Notices of the Royal Astronomical Society detailing the study.

“He lost himself in the words and images conjured in his mind and for a while forgot … He found himself flying among stars and planets…”
― Carlos Ruiz Zafón, The Prince of Mist

The star at the center of the V 1298 system is a younger version of our own stellar companion. Roughly the same mass and size as the Sun, V 1298 is just 25 million years old. If our own Sun (roughly 4.5 billion years old) is thought of as a 45-year-old person (the Sun is, in fact, a mid-aged star), V 1298 would be the equivalent of a three-month-old infant.

The two planets closest to the star are both about the size of Neptune, while the two further out are each the size of Saturn. Astronomers studied these worlds with the Chandra X-ray telescope, looking to measure the amount of radiation pouring down on these worlds.

The study concluded that the innermost pair of planets would, likely, be stripped of any atmosphere, while the outermost planet would remain a gas giant, similar to Saturn. The third (known) planet from the star remains an enigma.

In the video above, look at the eRosita X-ray telescope, part of the “Spektrum-Röntgen-Gamma” (SRG) Mission.

As this stellar system ages, the rotational rate of the star slows. Since X-ray emission (and magnetism) is driven by the rotation of stars, the levels of X-ray radiation produced by the young star decreases over time.

“The evaporation of the exoplanets depends on whether the star spins down quickly or slowly over the next billion years — the faster the spin-down, the less atmosphere is lost,” explains doctoral student and Laura Ketzer of AIP.

The atmospheres of exoplanets can tell us much about the mysterious worlds that orbit distant stars. A new generation of X-ray telescopes, including eRosita (launched in July 2019), is poised to uncover a wealth of new information about our other worlds in our stellar neighborhood.

Read next: This tiny electric plane from a company you’ve never heard of is actually a BIG deal for aviation