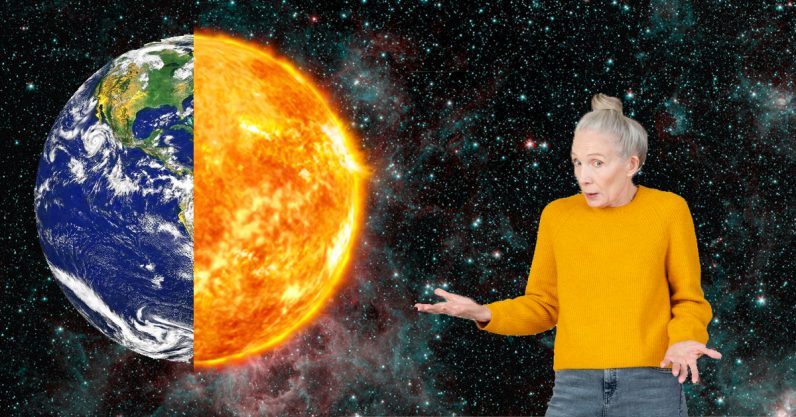 A new mathematical model predicts some exoplanets are hotter than thought, creating strange alien worlds that are half planet and half star.

Hot Jupiters are not found in our solar system, but astronomers have detected evidence showing large populations of these massive worlds in other star systems, huddling close to their parent suns.

For five years, papers showed an unusual trend showing up in studies of these exoplanets— temperatures of these worlds were consistently lower than predictions suggested. Even temperatures on worlds of molten rock were seen to be significantly lower than predictions predicted. This suggested something was unusual — either with theories, observations, or calculations.

“It seemed to be a trend — a new phenomenon The exoplanets were consistently colder than scientists would expect.” Nikole Lewis, assistant professor of astronomy at Cornell University and the deputy director of the Carl Sagan Institute (CSI), stated.

Read: [Why the distance of exoplanet Kepler-1649c from its sun can be threatening]

Just then a generation ago, planets around other stars were just a theoretical idea. Now, astronomers know of more than 4,100 alien worlds.

Some of these — large gas giants like Jupiter and Saturn — orbit close to their suns, giving them the moniker of hot Jupiters.

“Exoplanets orbiting incredibly close to their parent star tend to become ‘tidally locked’ — where one side always faces its star (just like how the Moon faces Earth). This produces a permanent dayside and nightside. The hemisphere of hot Jupiters facing their sun becomes broiled in unending heat, while the other half of the world sits in eternal, frigid, darkness,” Dr. Ryan MacDonald, Research Associate at the Carl Sagan Institute, tells The Cosmic Companion.

The gravitational pull of the sun pulls on the gaseous outer layers of these worlds, pulling material toward the star. These forces can result in an atmosphere resembling an egg shape, with the pointy end aimed at the star. The thick, gaseous atmosphere surrounding the cores of these worlds could even be pushed outward to space by pressure from the nearby sun.

“The greatest temperature differences (more than 1000 degrees) are expected for ‘ultra-hot’ Jupiters — giant planets orbiting so close their year can be less than a day! Close-in rocky planets, so-called ‘lava worlds’, can also experience over a 1000 degree difference between their dayside and nightside — this has even been measured for one rocky planet, 55 Cancri e, which is 2500 C on the dayside but 1100 C on the nightside,” MacDonald continues.

Astronomers usually average the temperatures measured on exoplanets as they study these ancient worlds. However, this new model, detailed in The Astrophysical Journal Letters, suggests temperature estimates may have been too low.

This is where things get wild

Temperatures on opposite sides of exoplanets can differ by thousands of degrees, resulting in radically different chemistry on each half of the world. These different conditions could give rise to the unusual temperature discrepancies, the new study revealed.

“The radically different temperatures drive extremely strong winds in these planets. Wind speeds around 5 km per second are not uncommon! In extreme cases, the dayside of some ultra-hot Jupiters can be hotter than most stars — resulting in bizarre objects that are like a half planet half star hybrid,” MacDonald described.

Often in science, estimation and simple models provide significant insights and simplify models. But, for hot Jupiters, a one-dimensional model (a single average temperature) was inadequate to properly model these worlds.

The researchers developed this new model as a means to test temperatures on planets hundreds of light-years from Earth. This new framework could provide significant insight into astronomers seeking to understand the behavior of distant worlds.

“When you treat a planet in only one dimension, you see a planet’s properties — such as temperature — incorrectly. You end up with biases. We knew the 1,000-degree differences were not correct, but we didn’t have a better tool. Now, we do,” Lewis said.

By knowing how temperatures change around these worlds reveals how chemistry around the globe behaves. This new model allows researchers greater insight into the chemistry of these worlds, and to the earliest era when planets first formed.

A visit from afar

It will be decades or centuries until we even send even robotic emissaries to worlds outside our solar system. A new generation of telescopes is nearly ready to explore the Universe. But, astronomy and space studies, like everything else around the world, is significantly impacted by the current global health crisis.

“When these next-generation space telescopes go up, it will be fascinating to know what these planets are really like,” MacDonald said.

Watch the video above to take a virtual tour of TRAPPIST-1d in an artist’s representation of what it might look like to stand on the surface of that alien world.

Until next-generation observatories on the ground and in space are able to directly measure temperatures on specific areas of a planet hundreds of light-years away, computer modeling remains a critical tool in uncovering the mysterious nature of these distant worlds.

This new study examined worlds seen by the most famous space telescope in (or above!) the world — launched 30 years ago this week.

“We thought we would have to wait for the new space telescopes to launch, but our new models suggest the data we already have — from the Hubble Space Telescope — can already provide valuable clues,” MacDonald stated.

When the next generation of telescopes begins to send data to Earth, it could help answer some of the greatest questions we have about alien worlds. Perhaps, even the question of whether or not we are alone in the Cosmos. A few solar systems offer tempting targets for astronomers.

“I can’t wait to learn more about the TRAPPIST-1 system. This system contains seven rocky planets, three of which could be in the habitable zone. When NASA’s James Webb Space Telescope launches in 2021, we will finally have a chance to peer into the atmospheres of these worlds. This will be a huge leap forward in our search for life in the Universe,” MacDonald envisions.

This article was originally published on The Cosmic Companion by James Maynard, founder and publisher of The Cosmic Companion. He is a New England native turned desert rat in Tucson, where he lives with his lovely wife, Nicole, and Max the Cat. You can read this original piece here [LINK].

Read next: Airbnb lays off 25% of workforce as coronavirus cripples its business