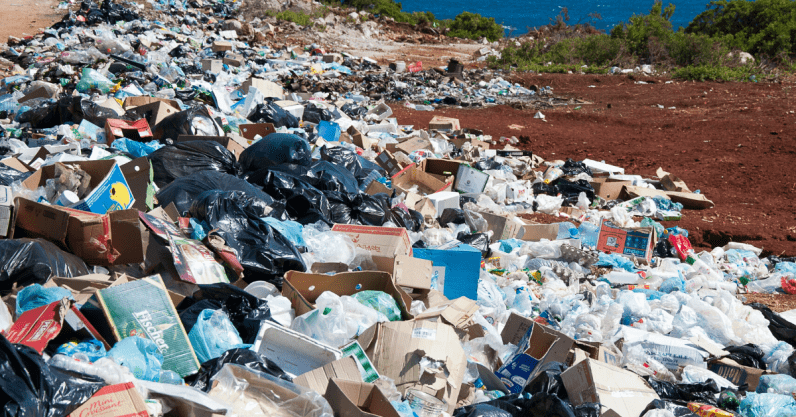 The world is drowning in plastic. About 60% of the more than 8,700 million metric tonnes of plastic ever made is no longer in use, instead sat mostly in landfill or released to the environment. That equals over 400kg of plastic waste for every one of the 7.6 billion people on the planet.

One reason for this is that many plastics are not recyclable in our current system. And even those that are recyclable still go to landfill eventually.

Plastics cannot be recycled infinitely, at least not using traditional techniques. Most are only given one new lease of life before they end up in the earth, the ocean or an incinerator. But there is hope in a different form of recycling known as chemical recycling.

Traditional physical or mechanical recycling typically grinds down plastic into smaller parts that are then mixed and moulded together to create lower grade plastic products. Chemical recycling, on the other hand, breaks the plastic down to the molecular level, making available “platform molecules” that can then be used to make other materials. It’s early days for this idea but, in principle, it could open up a whole range of opportunities.

Plastics are a broad classification of materials known as polymers, which are made from small “monomer” building block molecules composed mostly from carbon and hydrogen. The challenge in chemically recycling plastic involves finding the right techniques to break down and reconstitute the material into a variety of end products while minimizing waste.

All this needs to be done in a productive, economic, large-scale and carbon-neutral way. The eventual solution should create less harm than the problem it is trying to solve.

The monomers that make up plastics can take a variety of shapes and sizes: some are straight lines, some are branched and some have rings. The ways that they are bonded together determines the plastic’s material properties, including how easy it is to break them down, their melting temperatures and so forth.

In the most simple terms, breaking chemical bonds is all a matter of energy. Plastics are largely very stable materials so they generally need a good deal of energy to break them down, usually in the form of heat to cause a process called pyrolysis. You can have more precise control over the breakdown using the right catalyst, a material that sparks the chemical reaction from a specific location in the polymer chain.

One example of a catalyst is the type of biological molecule known as an enzyme. These occur in living organisms and play a vital part in processes in the body such as digestion. There are up to 50 known “plastivore” micro-organisms that can digest plastic because they contain enzymes that help break it down.

But using these natural processes can be challenging because you have to keep the biological organisms alive, so they require very specific conditions such as temperature and pH levels, and they often take a long time to complete the process. However, with more research they might be used commercially in the future.

Other catalysts can work quite quickly. For example, my colleagues and I have demonstrated that it’s possible to use iron nanoparticles to help turn black plastic (one of the most difficult types to recycle) into carbon nanotubes in a matter of moments. We were then able to use this new material to build electrical components such as data cables to transmit information to a speaker system to play music.

There is a global effort in this growing field to develop new techniques. Research has shown you can chemically recycle old cooking oil (a natural polymer) into a biodegradable resin for use in 3D printers. Other waste materials such as food, rubber and plastics can be used to rapidly produce graphene (a one-atom-thick form of carbon). Scientists have also developed a way to repeatedly recycle bioplastics instead of leaving them to slowly biodegrade and release carbon dioxide.

Chemical recycling could compliment mechanical recycling, especially for problem materials in physical recycling such as thin films and microplastics. These get trapped in the grinding machinery because of their small size and strength, causing the whole system to get stuck, slow down or even stop entirely and need cleaning. The grinders can’t work on thin films, let alone microplastic materials that are hundreds of times smaller.

Many of these techniques have been demonstrated in the laboratory and there are several companies now doing this at a commercial level. These processes take time, expertise and money. But until we stop using plastics this a growing field of opportunity for investment to develop a circular carbon economy thanks to the use of chemical recycling of plastics.

This article is republished from The Conversation by Alvin Orbaek White, Senior Lecturer in The College of Engineering, Swansea University under a Creative Commons license. Read the original article.

Read next: The coronavirus pandemic shouldn't legitimize permanent surveillance after the crisis