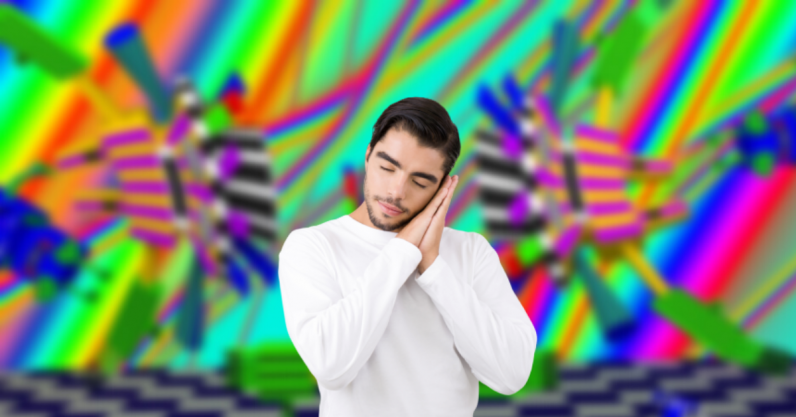 Although science knows what dreams are, it is still not known exactly why we dream, although plenty of theories exist.

Dreams are patterns of sensory information that occur when the brain is in a resting state – as in asleep. It is generally assumed that dreams only occur during rapid eye movement (REM) sleep – this is when the brain appears to be in an active state but the individual is asleep and in a state of paralysis. But studies have shown that they can also happen outside of REM.

Research from sleep studies, for example, shows that REM-related dreams tend to be more fantastical, more colorful and vivid whereas non-REM dreams are more concrete and usually characterized in black and white. Recent studies on dreaming show that during a dream (and in particular a REM-related dream) the emotional centre of the brain is highly active whereas the logical rational centre of the brain is slowed. This can help explain why these dreams are more emotive and surreal.

Evolutionary theory suggests the purpose of dreams is to learn, in a safe way, how to deal with challenging or threatening situations. Whereas the “memory consolidation” theory suggests that dreams are a byproduct of reorganizing memory in response to what has been learned throughout the day.

Both theories have at least one thing in common – during times of stress and anxiety we either dream more or remember our dreams more often, as a way of coping with challenging circumstances and new information.
This is also in line with another theory of dreaming – the mood regulatory function of dreams theory, where the function of dreams is to problem-solve emotional issues.

While there is no evidence that we dream more when we are stressed, research shows we are more likely to remember our dreams because our sleep is poorer and we tend to wake in the night more frequently.

Outside of insomnia, research has found that people who are depressed, while going through a divorce, appear to dream differently compared to those who are not depressed. They rate their dreams as more unpleasant. Interestingly though the study found that those depressed volunteers who dreamt of their ex-spouse were more likely to have recovered from their depression a year later compared to those that did not dream of the ex-spouse. Participants whose dreams changed over time, to become less angry and more pragmatic, also showed the greatest improvements. The question is why?

Although our senses are dampened during sleep (with vision being completely absent), strong sensory information, such as an alarm, will be registered and in some cases incorporated into the dream itself. We also know that during times of stress we are more vigilant to threat (on cognitive, emotional and behavioral levels), so it stands to reason that we are more likely to incorporate internal and external signals into our dreams, as a way to manage them. And this may account for these changes in our dreams, when we are anxious, depressed or sleeping badly.

How to sleep better

The current thinking is stress reduction before bed and good sleep management – such as keeping a consistent sleep routine, using the bedroom only for sleep, making sure the bedroom is cool, dark, quiet and free from anything arousing – will reduce awakenings at night and so the frequency of stress-related negative dreams.

That said, using a technique called Imagery Rehearsal Therapy (IRT), mainly used for treating nightmares in people with post-traumatic stress disorder, it appears stress and anxiety associated with nightmares and bad dreams as well as the frequency of bad dreams can be reduced. This is achieved by re-imagining the ending of the dream or the context of the dream, making it less threatening.

There is also evidence that IRT is effective for reducing nightmares in children. Although IRT is thought to be successful by giving the dreamer a sense of control over the dream, this hasn’t been well studied in people who are stressed or anxious.

That said, a recent study showed that teaching people with insomnia to be aware while they were dreaming and to control the dream, as it occurs – known as lucid dreaming training – not only reduced their insomnia symptoms but also reduced their symptoms of anxiety and depression. Perhaps then the key is to manage the dreams as opposed to trying to manage the stress – especially in uncertain times.

This article is republished from The Conversation by Jason Ellis, Professor of Sleep Science, Northumbria University, Newcastle under a Creative Commons license. Read the original article.