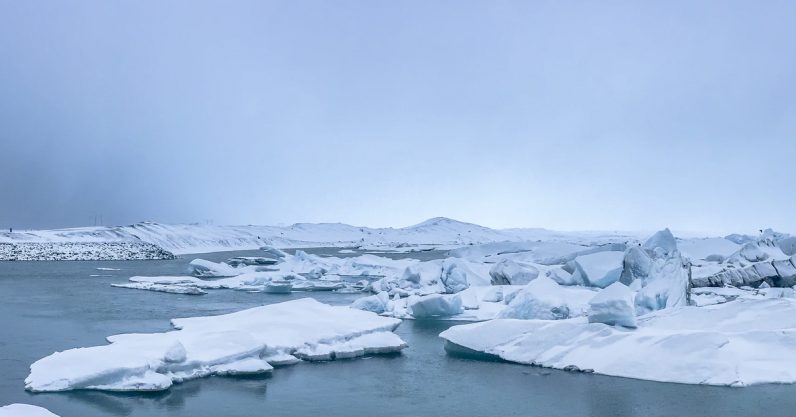 The Arctic is predicted to warm faster than anywhere else in the world this century, perhaps by as much as 7°C. These rising temperatures threaten one of the largest long-term stores of carbon on land: permafrost.

Permafrost is permanently frozen soil. The generally cold temperatures in the Arctic keep soils there frozen year-on-year. Plants grow in the uppermost soil layers during the short summers and then decay into the soil, which freezes when the winter snow arrives.

Over thousands of years, carbon has built up in these frozen soils, and they’re now estimated to contain twice the carbon currently in the atmosphere. Some of this carbon is more than 50,000 years old, which means the plants that decomposed to produce that soil grew over 50,000 years ago. These soil deposits are known as “Yedoma,” which are mainly found in the East Siberian Arctic, but also in parts of Alaska and Canada.

As the region warms, the permafrost is thawing, and this frozen carbon is being released to the atmosphere as carbon dioxide and methane. Methane release is particularly worrying, as it’s a highly potent greenhouse gas.

But a recent study suggested that the release of methane from ancient carbon sources – sometimes referred to as the Arctic methane “bomb” – didn’t contribute much to the warming that occurred during the last deglaciation – the period after the last ice age. This occurred 18,000 to 8,000 years ago, a period that climate scientists study intently, as it’s the last time global temperatures rose by 4°C, which is roughly what is predicted for the world by 2100.

This study suggested to many that ancient methane emissions are not something we should be worried about this century. But in new research, we found that this optimism may be misplaced.

We went to the East Siberian Arctic to compare the age of different forms of carbon found in the ponds, rivers, and lakes. These waters thaw during the summer and leak greenhouse gases from the surrounding permafrost. We measured the age of the carbon dioxide, methane and organic matter found in these waters using radiocarbon dating and found that most of the carbon released to the atmosphere was overwhelmingly “young.” Where there was intense permafrost thaw, we found that the oldest methane was 4,800 years old, and the oldest carbon dioxide was 6,000 years old. But over this vast Arctic landscape, the carbon released was mainly from young plant organic matter.

This means that the carbon produced by plants growing during each summer growing season is rapidly released over the next few summers. This rapid turnover releases much more carbon than the thaw of older permafrost, even where severe thaw is occurring.

So what does this mean for future climate change? It means that carbon emissions from the warming Arctic may not be driven by the thawing of an ancient frozen carbon bomb, as it’s often described. Instead, most emissions may be relatively new carbon that is produced by plants that grew fairly recently.

What this shows is that the age of the carbon released from the warming Arctic is less important than the amount and form it takes. Methane is 34 times more potent than carbon dioxide as a greenhouse gas over a 100-year timeframe. The East Siberian Arctic is a generally flat and wet landscape, and these are conditions that produce lots of methane, as there’s less oxygen in soils that might otherwise create carbon dioxide during thaws instead. As a result, potent methane could well dominate the greenhouse gas emissions from the region.

Since most of the emissions from the Arctic this century will likely be from “young” carbon, we may not need to worry about ancient permafrost adding substantially to modern climate change. But the Arctic will still be a huge source of carbon emissions, as carbon that was soil or plant matter only a few hundred years ago leaches to the atmosphere. That will increase as warmer temperatures lengthen growing seasons in the Arctic summer.

The fading specter of an ancient methane time bomb is cold comfort. The new research should urge the world to act boldly on climate change, to limit how much natural processes in the Arctic can contribute to the problem.

This article is republished from The Conversation by Joshua Dean, Lecturer in Biogeochemical Cycles, University of Liverpool under a Creative Commons license. Read the original article.

Read next: Here's why we'll never know if a high viral load corresponds to a worse case of coronavirus