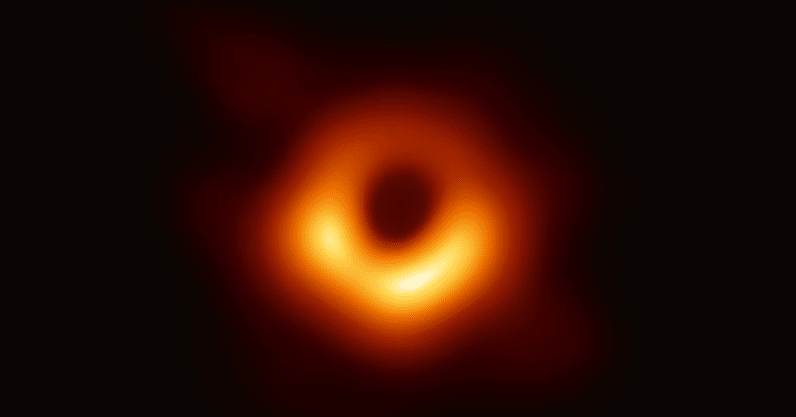 This month marks the first anniversary of the image of the environment directly surrounding the black hole at the center of the M87 galaxy —captured by the Event Horizon Telescope (EHT). In the twelve months since this spectacular achievement, researchers have not rested on their laurels. Several teams have been hard at work imagining and theorizing ways to build a better black hole image.

Just this week, as that anniversary approaches, researchers have published a study that promises to both improve the imaging of black holes but also increase the amount of information that can be derived from such images.

The team, led by scientists at the Center for Astrophysics, Harvard and Smithsonian (CfA), have calculated that an intricate substructure within black hole images could be revealed by extreme gravitational lensing — the phenomena by which objects with great mass cause the curvature of space and thus, bend the path of light traveling through it.

The team conducted their study, published in the journal Science Advances, by examining the image of M87, in particular, the golden ring that dominates it. They note that this ring should contain a sub-structure of smaller rings, as predicted by the theory of general relativity, which the EHT was unable to resolve. And within this sub-structure of rings is information about the black hole in question.

When looking at the image of M87 it is impossible not to notice that it is dominated by a bright gold ring. Einstein’s theory of general relativity, which is used to predict the properties of black holes, says that within this bright ring there should be a ‘photon ring’ which is composed of a sequence similar sub-rings.

“The image of a black hole actually contains a nested series of rings,” explains Michael Johnson of the CfA. “Each successive ring has about the same diameter but becomes increasingly sharper because its light orbited the black hole more times before reaching the observer.

With the current EHT image, we’ve caught just a glimpse of the full complexity that should emerge in the image of any black hole.

The reason black holes have been so difficult for astronomers to spot relates to the quality through which they earned their moniker in the first place. At the edge of a black hole exists a boundary known as the ‘event horizon’ this is the point at which its gravitational influence on space is so extreme that not even photons can escape its pull.

This trapping of photons means the black hole casts a shadow on the bright emission of the gas and dust that surrounds it, gradually falling onto its surface. Around this shadow is a ring of photons produced by the strong gravitational effect outside the event horizon in the vicinity of the black hole. Trapped, but still circling the object.

The video below shows a black holes cast a shadow on the image of bright surrounding material because their strong gravitational field can bend and trap light. The shadow is bounded by a bright ring of light, corresponding to photons that pass near the black hole before escaping. The ring is actually a stack of increasingly sharp subrings, and the n-th subring corresponds to photons that orbited the black hole n/2 times before reaching the observer. This animation shows how a black hole image is formed from these subrings and the trajectories of photons that create the image.

This photon ring contains characteristic information about the black hole — its size, shape, its angular momentum or spin — and thus can be used as a tool to study the black hole itself. Perhaps, an even more stunning revelation about these rings is that general relativity tells us that each ring is composed of trapped photons that together represent a picture of the Universe as seen from the face of the black hole.

Bringing together theory and experiment to study black hole physics

The team brought together researchers from varied fields including observational astronomy, theoretical physics, and astrophysics to reach their conclusion.

“Bringing together experts from different fields enabled us to really connect a theoretical understanding of the photon ring to what is possible with observation,” remarks George Wong, a physics graduate student at the University of Illinois at Urbana-Champaign.

Wong’s software was used to produce the simulated black hole images, achieving a higher resolution than previously computed. The software was then used to decompose these images into a predicted series of sub-images. “What started as classic pencil-and-paper calculations prompted us to push our simulations to new limits.”

“This is an extremely exciting time to be thinking about the physics of black holes,” adds Daniel Kapec from the Institute for Advanced Study. “Einstein’s theory of general relativity makes a number of striking predictions for the types of observations that are finally coming within reach, and I think we can look forward to lots of advances in the coming years.”

Kapec goes on to explain that the rapid convergence between theory and experiment is especially rewarding for theorists. Something that is reflected by how close the EHT image of the black hole at the center of M87 resembles predictions made from Einstein’s theory of general relativity. He adds: “I hope we can continue to isolate and observe more universal predictions of general relativity as these experiments become more sensitive.”

As if this possibility isn’t exciting enough in of itself, the team believe that the ring-like substructure of a black hole’s image also grants new techniques that can be utilized to image these spacetime events.

“What really surprised us was that while the nested subrings are almost imperceptible to the naked eye on images — even perfect images — they are strong and clear signals for arrays of telescopes called interferometers,” explains Johnson. “While capturing black hole images normally requires many distributed telescopes, the subrings are perfect to study using only two telescopes that are very far apart. Adding one space telescope to the EHT would be enough.”

Perhaps the most remarkable thing about the image taken by the EHT last year and revealed to the public in April as the first image of a black hole is the way it has changed black hole research from a purely theoretical field to on dependent on experimental science.

Alex Lupsasca from the Harvard Society of Fellows concludes: “As a theorist, I am delighted to finally glean real data about these objects that we’ve been abstractly thinking about for so long.”

This article is based on the research paper: Johnson. M.D, Lupsasca. A, Strominger. A, et al, ‘Universal interferometric signatures of a black hole’s photon ring,’ (2020), Science Advances.

Read next: Self-supervised learning is the future of AI