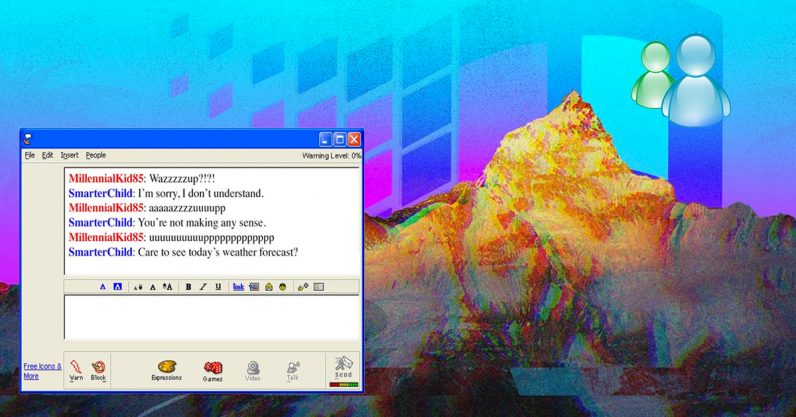 In the glory days of AOL Instant Messenger, back when screen names and away messages were serious literary pursuits, a mysterious chat maverick strode about the dial-up frontier and schooled legions of uncouth adolescents in the art of conversation. Who was this rogue wordsmith, this tireless vexer of pre-teen millennials? Surely no mortal could generate replies with such speed, charm, and unflinching certainty. Turns out it was a bot, an artificial chat companion named SmarterChild, and it was sublime.

No matter the topic, intensity, or logic of conversational challengers, SmarterChild always had the final word. Backed into a corner, it would offer updates on news, weather, and movies. An object of ridicule, it would lecture offenders on the importance of good manners. Best of all, SmarterChild was always up for discussion and eager to offer the most earnest replies its programming would allow.

That was the early 2000s. Not long after, Facebook poked the world, AIM experienced mass exodus, and SmarterChild embarked on an extended sojourn after its parent company was acquired by Microsoft. Chatbots were largely forgotten, but in the years that followed, while we were still learning to tap, swipe, and scroll with our thumbs, it’s rumored that SmarterChild ignited an AI revival in the wilderness. Whatever the truth, we’ve come full circle, and chatbots have once again staked claim to our shriveling attention spans. Unfortunately, we still don’t know what to make of them.

The specter of SmarterChild is strong with us. We expect bots to be buds, only to discover a throng of duds. The way that companies have marketed bots hasn’t helped. We’ve been promised companions, assistants, and friends, but those are human roles. Chatbots have unique abilities that humans don’t. When we regard them as non-human tools, they provide business opportunities that humans can’t. Unfortunately, there’s much confusion about their capabilities. Even more so when it comes to their underlying technology.

On the other hand, computers are unsophisticated distinguishers of intent, especially where ambiguity, a constant of human communication, is at play. This is Natural Language Understanding. Bots talk a good game but understand very little when meaning or speech habits fall outside their programming. As a result, opinions about chatbots tend to be dogmatic.

At one end of the spectrum exist the doomsayers, the conspiratorialists that believe chatbots are becoming more human than their creators, and it’s only a matter of time before WE’RE answering inane questions for THEM. At the other end, we have the AI evangelists, who pine for a day when bots overtake every task that humans find undesirable, all to the tune of ever-increasing profits.

There’s ample misinformation, but we aim to cut through the exaggeration and break things down nice n’ simple. This infographic is nothing but straight talk the most important chatbot concepts that anyone needs to know in order to have an expert-level conversation.

This article was originally published on TopTal by Micah Bowers, a freelance brand designer and editor for the Toptal Design Blog. You can read it here.

Read next: If you’re at a professional crossroads, this software engineering training might help.