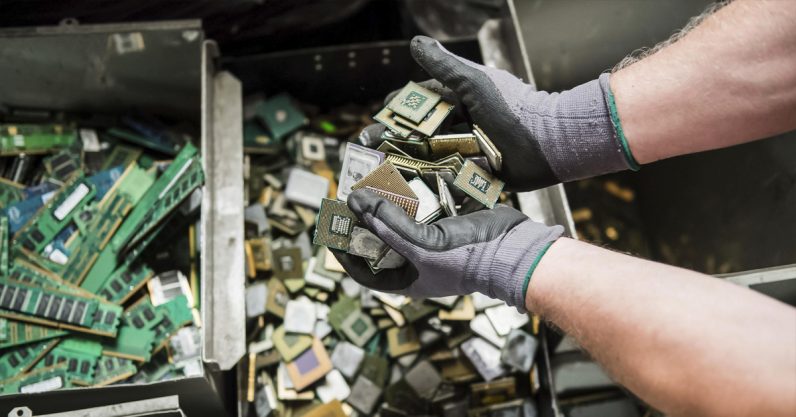 Our connected consumer society generates a lot of electronic waste, around 50 million tonnes per year worldwide. It is even currently the waste that shows the strongest growth from one year to the next. The value of the raw materials included in this waste is estimated at 50-60 billion euros, depending on materials prices. Legislation and recycling channels for this waste are organized in many countries, thanks to extended producer responsibility systems, but currently, only 20% is recycled in a certified process. In addition, of the sixty chemical elements present in electronic waste, only a minority is recycled, ten in number: gold, silver, platinum, cobalt, tin, copper, iron, aluminum, and lead). Everything else ends up in fine waste in landfills.

The ideal, from the point of view of the circular economy, would be on the one hand to prolong as much as possible the lifespan of these electronic devices, in particular by prolonging the first use, and on the other hand to facilitate and favor reuse or repair. The fact remains that these landfills represent real “urban mines:” potential deposits for those who know how to exploit them.

How do we deal with electronic waste?

Recycling electronic waste means separating materials, molecules, or chemical elements so that they can be sold as raw materials for the manufacture of new products. First, you have to dismantle the devices and components, sort them, grind them, and finally separate the materials, most often by incineration and then by solution-based chemical processes.

Getting more chemicals from the urban mine is easier said than done. Electronic waste is very varied in nature and is often mixed with other types of wastes. The composition of the waste to be treated therefore varies from one shovel of waste incinerator’s ash or from one batch of waste to another. This contrasts with the exploitation of a “traditional” mine where the composition of the ore is much simpler and constant, at least in comparison.

The chemist is faced with an extremely complex separation problem. This partly explains why the recycling industry is currently focusing on the most concentrated or economically attractive metals to recover, hence the list above.

Sorting aims to minimize the chemical complexity of the mixture to be treated, as well as its variability. It can be done at all scales: that of the device (type, generation), of its modules (printed circuits, batteries, external envelopes, frames, etc.), of their elementary electronic components (cables, resistances, capacities, chips, bare boards, etc.), or even at the level of the powder resulting from grinding, which can be carried out on all the scales described.

Read: [6 things I learned from working in climate tech startups]

The complete disassembly of devices is theoretically the most effective approach. But, due to the multiplicity and complexity of equipment, it’s difficult to automate this step: disassembly is still mainly carried out manually, which means that its cost is often too high to allow sorting down to the level of the elementary components.

Consequently, the most common approach among recyclers (MTB, Paprec, Véolia), before any chemical treatment, is the grinding at the scale of the device or its modules, followed by steps of separation of the particles by physical methods using the differences in densities or magnetic properties. Depending on the purity of the powders obtained, thermal or chemical treatments are then used to refine the composition of the final products.

In the latter case, the most used process of separation in a solution of chemical elements is the so-called liquid-liquid extraction. It usually consists first of dissolving the metals or their oxides in an acid (for example nitric acid), then making an emulsion, that is to say the equivalent of a French vinaigrette. The acid solution (“vinegar”) is vigorously mixed with an organic solvent (such as kerosene, “oil”) in an extraction column and one or more molecules (“mustard”) having the property of promoting the transfer of certain metals (“flavors”) from acid to solvent. As this separation step is rarely perfect, it is repeated in series in order to reach the desired purity levels. Several dozen, even several hundred, successive extractions are sometimes necessary to achieve the desired purity.

Optimizing the costs and efficiency of such processes requires the study of the influence of a very large number of parameters (for example, the concentrations of chemical species, acidity, temperature, etc.) in order to define the combination which represents the best compromise.

In the laboratory SCARCE, we are working on new processes that will ultimately allow “increase the number of chemical elements recycled and increase their recycling rates: on the one hand with mechanical processes (automation of disassembly and sorting), on the other hand with chemical extraction processes in solution.

For example, as we have seen, the chemical composition of electronic waste is very variable. The development of an extraction process, for specific chemical composition, can easily take five to ten years of research and optimization and the adaptation of an existing process to a new composition (for example a new metal) requires several months to several years. This is hardly compatible with the volumes of waste, the resources and the time available for recycling waste.

Microscopic piping to optimize the extraction of elements

To reduce the time and cost of developing new extraction processes, we have miniaturized and integrated into a single device microfluidics automated all the equipment necessary for a process study. In a microfluidic device, the piping is smaller than a millimeter (in our case 100 µm thick, the thickness of two hairs or less). This allows very small amounts of material to be used: a few microliters of solvents and acids instead of milliliters, and a few milligrams of chemical compounds instead of grams. With the integration of analysis methods (X-rays, infrared and sensors), we can study the different combinations of parameters continuously, automatically and quickly. This allows us to do a study in a few days which can normally take up to several months.

An additional advantage of microfluidics compared to a conventional device: we better understand the phenomena of transfers of chemical elements at the interface between water and oil. Indeed, we control both the exchange surface between water and oil thanks to the use of a porous membrane, as well as the contact time between the two phases, which are pushed into the microfluidic channels using computer-controlled syringe pumps. Material flows can then be calculated precisely.

This approach recently allowed us to study the extraction of strategic metals found in mobile phones. These metals, essential in modern technologies, are produced mainly in China and are little recycled at present – under 5%. This is all the more unfortunate as their production is very expensive and can pose societal and environmental problems.

Our results show that the combination of two specific extracting molecules makes it possible to extract rare earth with an efficiency almost 100 times greater than the efficiency of extractions with the molecules used separately. In addition, we have demonstrated efficient extraction at acid concentrations 10 to 100 times lower than those used in industry, which generates less pollution. We have also identified combinations of parameters that make it possible to separate the rare earth much more efficiently from each other, which is conventionally very difficult to achieve in a few steps. We are now studying the transposition of these results, obtained on a very small scale, to that of the industrial production tool.

Finally, our microfluidic approach is modular which means that each of the modules can find its usefulness in other cases, for example, the liquid-liquid extraction module can be useful for the study of processes of extraction of organic molecules (essential oils); or the infrared spectroscopy module for online monitoring of agrifood or pharmaceutical processes. It allows you to determine the amount of unbound water – it is the water that surrounds the molecules that are dissolved in it, but that does not interact with them, a key parameter to follow in many formulations of these industries.

This article is republished from The Conversation by Jean-Christophe P. Gabriel, Research Director at CEA (IRAMIS/NIMBE de Saclay) under a Creative Commons license. Read the original article.