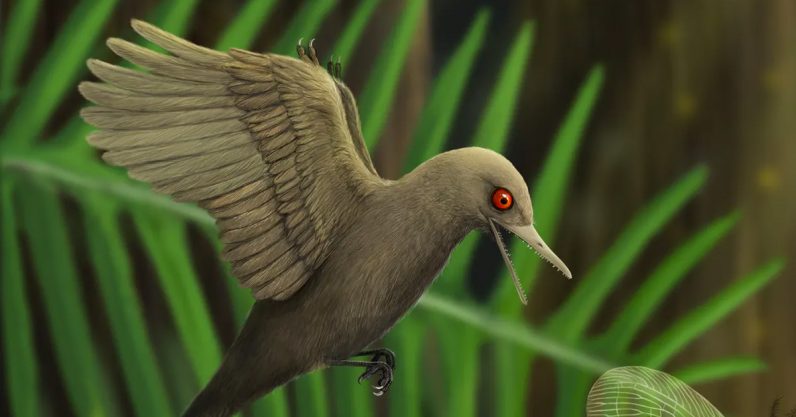 The head of a flying dinosaur that is hardly bigger than a bee hummingbird has been discovered in 99-million-year-old amber. The piece of polished amber, just 31mm by 20mm by 8.5mm, was found in Kachin Province of northern Myanmar, an area becoming increasingly well-known for its remarkable amber-encased fossils.

This exciting little fossil micro-dinosaur named Oculudentavis khaungraae is from the middle of the Cretaceous period, from a stage known as the Cenomanian. The skull looks remarkably bird-like and a number of features suggest Oculudentavis is related to the early ancestors of modern birds. The fossil also appears to have preserved some of the dinosaur’s original bodily material.

The researchers from China and the US who studied the fossil subjected it to CT analysis (computed tomography, which uses X-rays to produce a series of cross-section images of a specimen) to examine the internal structure. But the amber is sufficiently clear that many of the features can be seen with the naked eye and a hand lens.

Oculudentavis has a long slender beak, a mouthful of needle-sharp teeth and massive eyes. Unlike most fossils, in which the original material is replaced by other minerals, the skull still appears to be composed of actual bone, although its microstructure and possible cell content have yet to be analyzed.

Some of the skin of the palate and the tongue is also preserved, including the small pointed papillae on its surface. In modern passerine birds such as the robin, these tongue bumps are directed backward and prevent prey from escaping from the mouth.

Read: [Dinosaurs are dead, but there’s still life inside their bones]

There do not appear to be any feathers preserved, but some of the organic material decayed to produce what is now a yucky mess (who would think that such things could be fossilized?) Sadly the rest of the animal’s body is not preserved. Perhaps it exists in another amber fragment awaiting discovery.

One particularly revealing feature is the skull’s huge orbit (eye socket). A circle of tiny bony plates known as a sclerotic ring is arranged within the orbit, forming a cone with an inner circle that indicates the creature would have had a very small pupil. This kind of eye is typical of many lizards of today that are active during the day and sleep at night, suggesting that Oculudentavis had a similar “diurnal” schedule.

The discovery is incredibly exciting for a number of reasons. Without a doubt, this is a dinosaur, but one that sits on the early part of the evolutionary tree that leads to modern birds. In fact, the authors’ analysis suggests that it is quite close to the most famous of all bird-dinosaurs, Archaeopteryx, which dates to the earlier Late Jurassic period around 150 million years ago and has been called the first bird.

Oculudentavis is also incredibly small. In fact, with a skull just 15 millimeters long, it must rank as the smallest of any dinosaur. While it is not certainly adult, it is by no means a juvenile, meaning it probably wouldn’t have grown much bigger.

The researchers point out that animals that evolve to become much smaller tend to come from isolated environments such as islands. For example, there were once dwarf mammoths on Crete, Sardinia, and Cyprus. Coincidentally, geologists have suggested that the Myanmar amber deposits were formed on an island that was part of a volcanic arc on the margins of the ancient Thethys Ocean.

The discovery of Oculudentavis is all the more fascinating because it was found in amber. Almost all fossils are formed from the hard remains of animals and plants: bones, teeth, shells, and wood. But the amber has preserved some of the soft tissues of the dinosaur, making it a very unlikely fossil.

Amber starts off as a sticky liquid resin oozing from wounds on trees. But as volatile chemicals evaporate from its surface, the resin hardens into lumps that take some hammering to remove from the tree. This means it is even more unlikely that a dinosaur would get preserved amber as most dinosaurs are large and the largest piece of amber ever discovered weighs a mere 15kg.

Not even Michael Crichton, the author of Jurassic Park, could conceive of a dinosaur in amber. Instead, his fairy-tale quest to resurrect dinosaurs envisaged a blood-sucking mosquito with a belly full of dino blood and dino DNA becoming trapped in the sticky resin.

But not all dinosaurs were large, and one hapless Oculudentavis khaungraae, the smallest of them all, found itself in the wrong place at the wrong time in a forest in what is now Myanmar. We do not know if this little dinosaur had wings and flew into the resin, or if it became accidentally stuck (presumably by its feathers) while hopping through the branches of a resiniferous tree.

The fossilized remains of Oculudentavis will be rich in all sorts of chemical decay products that can often be traced back to original biomolecules. But unfortunately, it is doubtful that any DNA remains. DNA is such a delicate molecule that it rarely survives more than a few thousand years in humans, perhaps as much as 17,000 years in other animals and just maybe around a million years in fossilized bacteria.

Oculudentavis actually isn’t the first dinosaur to be found in amber. In 2016, researchers reported a piece of amber also from Myanmar with the tail of a feathered dinosaur. The authors of this paper speculated that one day a complete dinosaur might be found in amber. Well, we now have a head and a tail. It’s just a body that is missing.

My hope though is for a pterodactyl to be found in amber. I don’t care how big or how small it is – I just want to know what they really looked like.

This article is republished from The Conversation by David Martill, Professor of ​Palaeobiology, University of Portsmouth under a Creative Commons license. Read the original article.