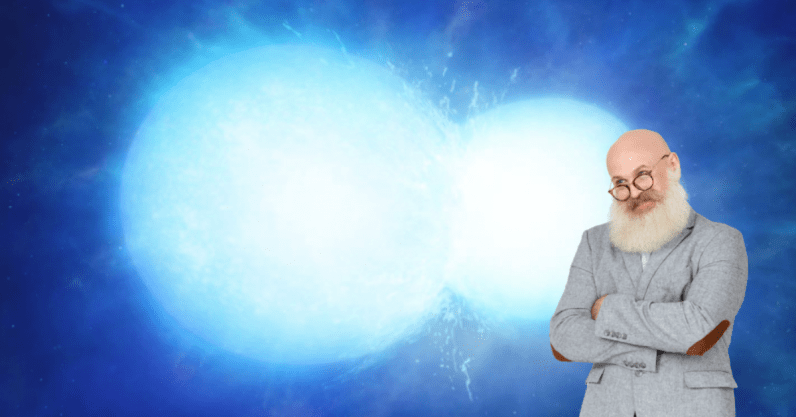 A team of astronomers from the University of Warwick led by Mark Hollands, have discovered an ultramassive white dwarf with a unique carbon-rich atmosphere never before observed around such a body. The researchers have concluded that the star — located around 150 light-years from Earth — is the product of a collision between two-parent white dwarfs which both narrowly escaped complete destruction. The finding represents the first time that the origins of such a merged white dwarf have been identified by the composition of its atmosphere and with the aid of some other important clues.

“We found a white dwarf with a unique surface composition of hydrogen and carbon. This star stood out as something we had never seen before,” Dr Hollands, from Warwick’s Astronomy and Astrophysics group and author on a paper detailing the findings published in the journal Nature Astronomy, says. “This is not possible to explain from the stellar evolution of a single star, as we would also expect to see a lot of helium.”

Hollands is alluding to the fact that astronomers expect to see an outer layer of hydrogen, sometimes mixed with helium, or just a mix of helium and carbon when they observe white dwarfs. “You don’t expect to see this combination of hydrogen and carbon at the same time as there should be a thick layer of helium in between that prohibits that. When we looked at it, it didn’t make any sense.”

After ruling out single star evolution as the genesis of the massive white dwarf — designated WDJ0551+4135 — Hollands says the team was forced to conclude that it formed as the result of a merger between two white dwarfs.

The discovery of the merger process birthing a massive white dwarf has the potential to raise new questions regarding the evolution of such stars and on our understanding of just how common supernovae are within the Milky Way. But first, the team’s suspicions had to be confirmed, and that would require more clues to be collected.

Taking measurements of the star’s other characteristics — such as its speed, mass and temperature — to reach a conclusion, the team assumed the role of cosmic detectives to mount an elaborate investigation into the birth of a massive white dwarf. And just like any good detective would, Hollands and his team used a mix of tools techniques to piece together their case.

The team made their initial discovery thanks to the utilization of survey data from the European Space Agency’s (ESA) Gaia space telescope. Then turning to a method known as spectroscopy, which characterizes a star’s light signature to determine its composition, to make sense of this data.

“To analyze the composition of the atmosphere, we acquired three sets of spectroscopic observations using the William Herschel Telescope in the Canary islands,” Hollands explains. “To analyze the spectrum we used an advanced stellar atmosphere code, which computes the structure of the white dwarfs outer layers and then combines this with advanced atomic physics to produce a model of the white dwarf spectrum which can then be compared with the data.”

They also discovered other clues as to the origins of WDJ0551+4135 in the motion of the star, its speed and the forces behind it — otherwise known as its kinematics. “WDJ0551+4135 has fast kinematics for a white dwarf of its temperature and mass, implying that it is older than it looks, and had a long history before forming as a single white dwarf.”

As Hollands points out, the deceptive age of the massive arises from the fact that older stars tend to move faster than their younger counterparts, but if WDJ0551+4135 is of an advanced age then it should be cooler than the ultraviolet data collected space telescope called Swift seemed to show. This disparity can be explained by a merger to two older white dwarfs essentially causing the cooling process to restart in the newly born white dwarf after the collision had occurred.

All the lines of evidence discovered by the team, such as the chemical composition of the white dwarf, and the very fact of its high mass, converged on this merger theory. “All of these things together make a strong case for WDJ0551+4135 having formed from a merger of two average mass white dwarfs,” says Hollands.

A tale of death and rebirth: The origin of an ultramassive white dwarf

After piecing together their clues, Hollands and team were able to construct the story of how WDJ0551+4135, and possibly other massive white dwarfs, came to be. Hollands lays it out: “The system would have started out as a binary system of two main sequence stars formed from around the same time in the same nebula.

“When the first star — the more massive of the two — exhausted its hydrogen fuel it would have transitioned into a red giant, expanding in size to around 100 times its original diameter.”

This would then be so big that it would envelop the second star, which would continue to orbit within the tenuous outer layers of the red giant. Gas drag on the second star would erode the separation between the stars bringing them closer together.

The researcher continues: “Soon, the giant ejects its outer envelope, leaving only its compacted dense core behind — the newly formed white dwarf. At this point, we have a binary system containing a white dwarf and a main-sequence — hydrogen-burning — star. The process then repeats itself further bringing the two stars closer together and resulting in a system containing two white dwarfs with a small separation — potentially able to fit within the size of our Sun.

“Following this, over hundreds of millions, or possibly even billions of years, the remaining separation would shrink further due to the emission of gravitational waves radiating away their orbital energy.

“Eventually the two white dwarfs come into contact and coalesce into a single white dwarf,” Hollands says finishing this remarkable tale of death and rebirth.

But that doesn’t mean case closed for our team of physicists turned cosmic detectives. There are still questions left unanswered.

The question remains, just how unique is WDJ0551+4135 and how common is the merger process which birthed it?

“There is plenty of evidence that white dwarf mergers occur, though it is generally very difficult to determine whether any individual white dwarf formed from a merger,” Hollands points out adding that we see supernova explosions in distant galaxies which are believed to result from double white dwarf mergers, where the combined mass is high enough to ignite rapid nuclear burning of carbon, thus destroying the two white dwarfs.

And closer to home, within the Milky Way, Hollands says that we also see double white dwarf systems sometimes on very close orbits, with orbital periods as low as a few minutes. In these cases, he adds, we expect gravitational-wave emission to cause the stars to merge over millions or billions of years.

“Finally when we look at the distribution of white dwarf masses, we see there are more heavy white dwarfs than you would expect if they had all formed from isolated stars, suggesting that a moderate fraction of the most massive white dwarfs formed from mergers,” the physicist explains.

Unfortunately, despite the Gaia mission increasing the amount of known white dwarfs tenfold, confirming that any particular massive white dwarf is the result of a merger is challenging. “In this case we used the unusual composition and kinematics to make this determination,” he says. “In the case of the massive white dwarf EUVE0317–855, it has a companion white dwarf on a wide orbit with a different age implied from white dwarf cooling, indicating that system was formerly three white dwarfs where two of them merged.”

Of course, such mergers between two white dwarfs may always result in an ultramassive white dwarf star. “ If the combined mass of the two merging white dwarfs is sufficiently high, instead of forming a new heavy white dwarf, the result is a thermonuclear supernova explosion which destroys the system,” warns Hollands. “For many decades this mass-limit was thought to be 1.4 times that of the Sun, at which point no white dwarf can exist without collapsing under its own weight. However in the last decade or so there has been evidence sub-luminous white dwarf supernovae having been observed in other galaxies, suggesting that detonations can occur at lower masses.”

Thus, the discovery of WDJ0551+4135 and its origin gives astronomers a hint at the lower limit of such supernovae explosions. As Hollands concludes: “The fact that WDJ0551+4135 did not explode it tells us that at this combined mass — 1.14 solar masses — explosions do not occur.

“And so in that sense learning about systems that do not explode, helps us to better understand those that do.”

This article was originally published on The Cosmic Companion by Robert Lea, a freelance science journalist from the UK, specializing in physics, astronomy, cosmology, quantum mechanics, and obscure comic books. The Cosmic Companion’s mailing list/podcast. You can read the original article here.

Read next: Pokémon Go update makes it easier to play from home amidst coronavirus outbreak