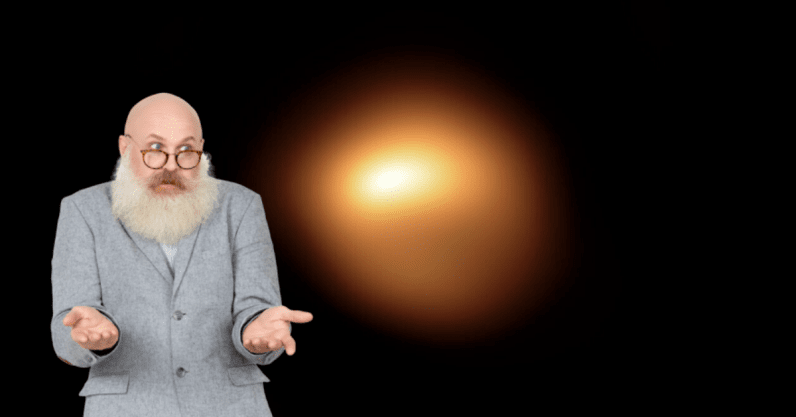 Astronomers have observed the ever dimming surface of Betelguese with the aid of the ESO’s Very Large Telescope (VLT). The stunning new images they have captured not only reveal the star’s unprecedented dimming but also that the red supergiant in the constellation of Orion is changing shape.

Betelgeuse began to noticeably dim in late 2019, with the red supergiant’s estimated drop in brightness currently at around 36% of its normal output. This is a change so extreme it is noticeable with the naked eye. Astronomers and researchers across the globe are clamoring to learn more about this drop in brightness and what it signifies for the star.

Enter Miguel Montargès, an astronomer at KU Leuven in Belgium, and his team. They have been observing Betelgeuse with the VLT since December in an attempt to unravel the cause of the changes it is undergoing. One of their observations takes the form of a stunning image of the star’s surface (above), taken with the Spectro-Polarimetric High-contrast Exoplanet Research instrument (SPHERE).

Betelgeuse’s irregular surface is made up of giant convective cells that move, shrink and swell. The star also pulsates, like a beating heart, periodically changing in brightness. These periodic changes are nowhere near as extreme as the changes the star has recently undergone, however. These convection and pulsation changes in Betelgeuse are referred to as stellar activity.

In addition to this image, because the team were also observing Betelguese in January 2019, they have been able to provide a side-by-side comparison that demonstrates just how extreme the star’s dimming is. Both the ‘before’ and ‘after’ images were taken in the visible light spectrum. This like for like comparison (above) also seems to clearly show that Betelguese is changing shape.
The stunning difference in Betelguese’s light output and shape can also be seen in this animation created by ESO.

This video below shows the star Betelgeuse before and after its unprecedented dimming. The observations, taken with the SPHERE instrument on ESO’s Very Large Telescope in January and December 2019, show how much the star has faded and how its apparent shape has changed.

Betelgeuse‘s dimming profile has led many scientists to speculate that the star is about to go supernova, a fate that awaits all red supergiants. Many astronomers believe that although this will happen to Betelguese at some point, this isn’t the process that it is currently undergoing. They have put forward other explanations of the dimming and shape-changing demonstrated in the SPHERE images.

“The two scenarios we are working on are a cooling of the surface due to exceptional stellar activity or dust ejection towards us,” says Montargès. “Of course, our knowledge of red supergiants remains incomplete, and this is still a work in progress, so a surprise can still happen.

The video below takes you from the surroundings of Betelgeuse, recently observed with the VISIR instrument on ESO’s Very Large Telescope (VLT), to its surface, which has been imaged by SPHERE on the VLT. The VISIR image shows the infrared light being emitted by the dust surrounding Betelgeuse in December 2019. The SPHERE image shows Betelgeuse’s visible surface, which has a size close to the orbit of Jupiter, in the same month.

The team needed the VLT to conduct such a precise study of the red supergiant which lies 700 light-years from Earth and gather clues that point to why it is dimming as it is one the few facilities capable of imaging the star’s surface. Montargès continues: “ Instruments on ESO’s VLT allow observations from the visible to the mid-infrared, meaning astronomers can see both the surface of Betelgeuse and the material around it.

“This is the only way we can understand what is happening to the star.”

The SPHERE image is accompanied by another new image of Betelguese taken by a team of astronomers led by Pierre Kervella from the Observatory of Paris in France, using another of the VLT’s instruments, VLT Imager and Spectrometer for mid-Infrared (VISIR).

This second image, also taken in December 2019, clearly shows light emit by dust clouds around the red supergiant. Kervella explains that the wavelength of the image is similar to that detected by heat cameras. The clouds of dust — which resemble flames in the VISIR image — are formed when the star deposits material into space.

“The phrase ‘we are all made of stardust’ is one we hear a lot in popular astronomy, but where exactly does this dust come from?” says Emily Cannon, a PhD student at KU Leuven working with SPHERE images of red supergiants. “Over their lifetimes, red supergiants like Betelgeuse create and eject vast amounts of material even before they explode as supernovae.

“Modern technology has enabled us to study these objects, hundreds of light-years away, in unprecedented detail giving us the opportunity to unravel the mystery of what triggers their mass loss.”

Read next: Samsung temporarily shuts down a factory in South Korea due to Coronavirus