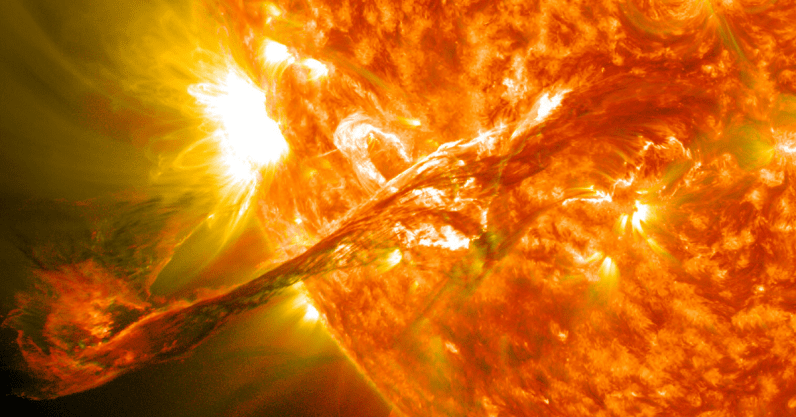 The past decade (2010-2019) was the hottest on record and five of the top 10 warmest single years have all occurred since 2015, according to reports released by the UK Met Office and the World Meteorological Organization.

The current Australian bushfire crisis is also the worst on record, having emerged due to a combination of increased average temperature (roughly 1.5°C above the long term average) and a reduction in rainfall.

But can we attribute this to anything more natural than anthropogenic effects? Solar activity, for example, has previously been linked to temperature and is sometimes blamed for climate change. But our new analysis provides evidence for why this isn’t the case.

The sun is the dominant source of energy for the Earth’s climate, so quantifying what influence it has had on global temperatures since industrialisation is very important.

Like all stars, the sun undergoes variations in solar activity, meaning its energy output varies with time. The visible surface of the sun (which you should never look at directly) is called the photosphere. When imaged, it appears as a white disk which is occasionally blotted by the appearance of sunspots.

These sunspots are regions of intense magnetic fields that restrict the movement of gas and cause it to cool, making these areas appear dark. However, these same intense magnetic fields connect the visible sunspots on the photosphere with active regions we can’t see. These are areas of gas thousands of kilometers above the visible surface that are superheated to millions of degrees. Such active regions emit light very strongly in ultra-violet and x-ray radiation.

The oldest and easiest way of approximating solar activity at any given time is to simply count the number of sunspots visible on the photosphere. The more sunspots, the more solar activity, and hence the greater overall emission of ultra-violet and x-rays. These emissions are largely absorbed by the Earth’s atmosphere before they reach the ground, causing heating (although some studies suggest the situation is more complicated).

Like our planet, the sun also has a magnetic field that extends outwards. The solar magnetic field defines the size of the solar system and can deflect incoming charged particle radiation from space, called cosmic rays. These cosmic rays have been linked with the Earth’s atmospheric chemistry, seeding cloud formation and extreme lightning storms, meaning they affect temperature and weather.

The number of sunspots rises and falls as part of a roughly 11-year solar activity cycle. There are many sunspots – and more associated emissions of UV and X-rays – at solar maximum and few or even no sunspots at solar minimum.

Some of the earliest scientific sunspot observations were made by Galileo Galilei in the 1610s. From the 1700s, such observations became more regular. They constitute one of the longest historically continuous data sets in all of science. The first observed solar cycle (1755-1766) is called solar cycle 1, the next solar cycle 2, and so on. The most recent is solar cycle 24, which officially began in December 2008 and is still ongoing. We are rapidly approaching the next solar minimum, which is expected in the next year or so.

Solar cycle 24 is unusually weak, with a relatively low number of sunspots, compared to previous cycles. The last one this weak was solar cycle 14, which began in January 1902.

If solar activity did play a significant role in recent changes in global temperatures, then those temperatures should have stayed roughly the same or even declined over the last decade. A paper from 2012 even predicted there would be a 1.0°C decrease in temperatures. Clearly this has not turned out to be the case. The hottest decade on record has coincided with the weakest solar cycle for over a century.

Given this combination of factors, it is rather difficult to defend the position that solar activity is indeed responsible for present climate change without a radical shake up of the understanding of solar physics. In the graphs below we have attempted to correlate the number of sunspots with variations in global sea surface temperatures (taken from the Japan Meteorological Agency), and global surface temperatures (taken from GISTEMP data).

The lower panels show scatter plots of the number of sunspots against temperature, and again no clear relationship is visible. You can work out mathematically how good the correlation is by measuring how close the datapoints are to a straight line. In such a calculation, a value of 0 suggests the data is random noise and a value of 1 represents a perfect correlation. We got values of between 0.09 and 0.04, which suggests that the variation is largely due to factors other than solar activity.

These observations of the present solar cycle make it very difficult to defend the position that solar activity is ultimately responsible for the world’s current warming trend. Instead they fit with the argument that human influences are responsible for a large amount of the recent increase in global temperatures.

While the sun is responsible for the overall climactic conditions on Earth, there has not been enough of a long-term difference in solar activity since industrialization to fully explain our current global warming trend.

Read next: Be the AWS cloud expert every business needs for under $15