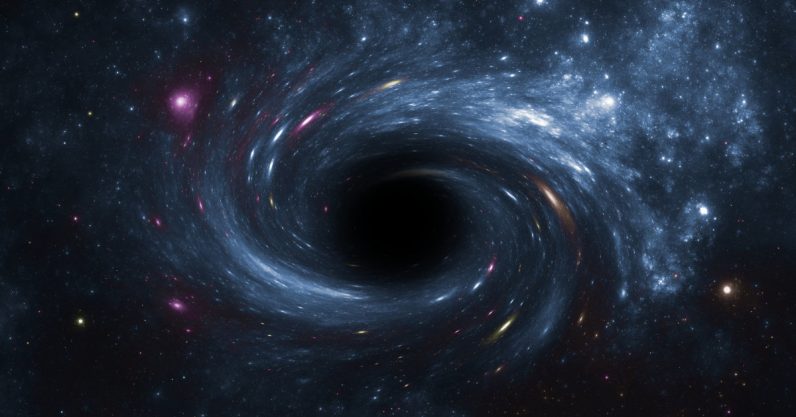 Every major galaxy is home to a supermassive black hole, and our own Milky Way is no exception. Astronomers recently found something unexpected near this massive object — 4 mysterious objects, each similar to a pair of bizarre bodies spotted in recent years in this same region of the galaxy.

Our local supermassive black hole, Sagittarius A* (Sgr A*, pronounced Sag A star), contains roughly 4 million times as much mass as the Sun. Not far from this black hole, members of a newly-discovered class of objects are caught in a gravitational dance with a massive body.

These G objects look like gas but behave like stars, as they complete their 100- to 1000-year-long orbits of Sgr A*. While they appear compact most of the time, they stretch out as they come closer to the black hole near the core of our galaxy.

[Read: Dark matter could help us understand the origins of gamma radiation]

G, this is an interesting finding…

The first G object was discovered in 2005 and was labeled G1. Seven years later, a second body was found, and given the moniker G2. The four newly-discovered objects are named G3 through G6. While G1 and G2 have the orbits similar to each other, the newly-found bodies follow significantly different paths around the center of the Milky Way.

“At the time of closest approach, G2 had a really strange signature. We had seen it before, but it didn’t look too peculiar until it got close to the black hole and became elongated, and much of its gas was torn apart. It went from being a pretty innocuous object when it was far from the black hole to one that was really stretched out and distorted at its closest approach and lost its outer shell, and now it’s getting more compact again,” said Andrea Ghez, professor of astrophysics at UCLA and director of the UCLA Galactic Center Group.

Following the discovery of the first pair of these bodies, Ghez and her team studied the region near the center of our galaxy, including the examination of 13 years of data from the Keck Observatory on Maunakea in Hawaii.

“No broad consensus has yet been reached concerning their nature: the G objects show the characteristics of gas and dust clouds but display the dynamical properties of stellar-mass objects,” researchers report in an article detailing their study, published in Nature.

Ghez believes these G objects were once pairs of binary stars which merged into single objects due to the extreme gravitational forces near the supermassive black hole. Such a process would take roughly one million years to complete, research suggests.

Gas within the G2 object was significantly stretched by gravity from Sgr A*, while dust within the body did not expand toward the black hole to nearly the same degree. This suggests a stellar-sized mass withing G2 is keeping the body largely intact.

“One of the things that has gotten everyone excited about the G objects is that the stuff that gets pulled off of them by tidal forces as they sweep by the central black hole must inevitably fall into the black hole. When that happens, it might be able to produce an impressive fireworks show since the material eaten by the black hole will heat up and emit copious radiation before it disappears across the event horizon,” stated Mark Morris, UCLA professor of physics and astronomy.

Getting the ‘hole’ story

Sagittarius A* was first discovered in February 1974 by Bruce Balick and Robert L. Brown, using the National Radio Astronomy Observatory’s Green Bank 35 km radio link interferometer. For 8 years, astronomers suggested a number of names for the behemoth black hole, but it was not until 1982 that the name Sgr A*, coined by Brown, became the standard label for this body. The asterisk in the name not only denotes “star,” but it also hearkens to the nomenclature of chemistry, where atoms in an excited state are denoted with the same symbol.

In the UCLA video below, it shows a look at the work of Andrea Ghez as she studies the effects of gravity in the Milky Way.

The supermassive black hole near the center of our galaxy is not nearly as active as those seen in many other galaxies. However, in 2005, Ghez and her team were able to show that Sgr A* is “feeding” more on the incoming matter in recent years (as seen from Earth).

“Mergers of stars may be happening in the universe more often than we thought, and likely are quite common. Black holes may be driving binary stars to merge. It’s possible that many of the stars we’ve been watching and not understanding may be the end product of mergers that are calm now. We are learning how galaxies and black holes evolve. The way binary stars interact with each other and with the black hole is very different from how single stars interact with other single stars and with the black hole,” Ghez said.

Read next: EU central banks team up to explore digital currency use cases