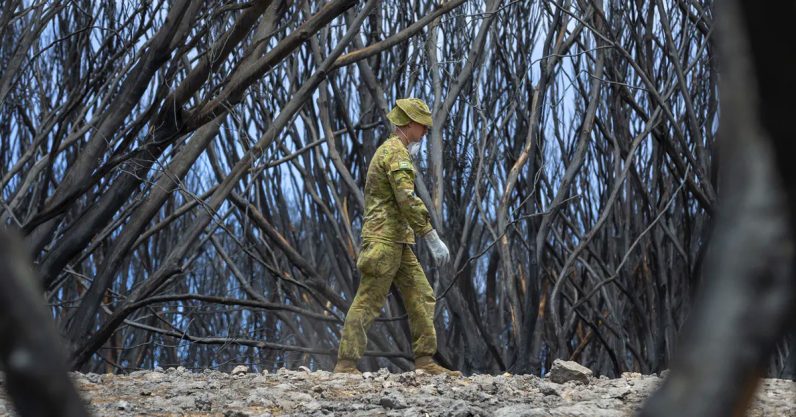 The sheer scale and intensity of the Australian bushfire crisis have led to apocalyptic scenes making the front pages of newspapers the world over. An estimated 10 million hectares (100,000 sq km) of land have burned since 1 July 2019. At least 28 people have died. And over a billion animals are estimated to have been killed to date. Of course, the actual toll will be much higher if major animal groups, such as insects, are included in these estimates.

The impacts of climate change – in particular, the consequences of the increasing frequency of extreme weather events on all life should be abundantly clear. People finally seem to be taking this seriously, but there is an undercurrent of opinion about the “naturalness” of wildfires. Some are still questioning the role of climate change in driving the Australian bushfires.

It is true that wildfires naturally occur in many parts of the world, and benefit plants and animals in ecosystems that have been uniquely shaped by fire over evolutionary time. And people have been using fire to manage ecosystems for thousands of years. We could learn a thing or two from Aboriginal people and the techniques they have traditionally used to prevent bushfires.

But make no mistake, the scientific evidence shows that human-caused climate change is a key driver of the rapid and unprecedented increases in wildfire activity. What is particularly worrying is the extent to which this is eroding the resilience of ecosystems across wide regions. Yes, it is plausible to expect most plants and animals that have adapted to fire will recover. But the ecological costs of huge, repetitive, high-severity wildfires on ecosystems could be colossal.

And it’s unclear how much the natural world can tolerate such dramatic disturbance. Wildfires are increasing in severity around the world. The Australian bushfires are larger than some of the deadliest recorded. Incidences are also increasing in ecosystems where wildfires are uncommon, such as the UK uplands. Not to mention the widespread deliberate burning of areas of high conservation value for agriculture, as has been recently reported in large parts of the Brazilian Amazon for beef production and in Indonesia for palm oil.

Unsurprisingly, given the shocking numbers of animals that must have perished as a result of these wildfires, many are questioning whether burned ecosystems can recover from such dramatic losses of biodiversity. In Australia, for example, some estimate that the fires could drive more than 700 insect species to extinction.

The world’s biodiversity is already severely struggling – we are in the midst of what scientists describe as the sixth mass extinction. A recent report has highlighted that about a quarter of assessed species are threatened with extinction. Australia already has the highest rate of mammal loss for any region in the world, signaling the fragility of existing ecosystems that might struggle to function in a warming, fire-prone world.

Fears for familiar and charismatic animals affected by the bushfires, such as koalas, have been expressed by conservationists. The outlook for already critically endangered species, such as the regent honeyeater and western ground parrot, meanwhile, is uncertain. But to establish the true ecological costs of wildfires it is important to consider biodiversity in terms of networks, not particular species or numbers of animals.

All species are embedded in complex networks of interactions where they are directly and indirectly dependent on each other. A food web is a good example of such networks. The simultaneous loss of such large numbers of plants and animals could have cascading impacts on the ways species interact – and hence the ability of ecosystems to bounce back and properly function following high-severity wildfires.

And so it’s key that we consider biodiversity loss due to wildfires in terms of entire networks of interacting organisms, including humans, rather than simply one or two charismatic animals. I have studied and recently published research about the loss of plants and animals due to wildfires in Portugal, using new methods in ecology that can examine the resilience of ecosystems to species extinctions. My team found that networks of interacting plants and animals at burned sites became fragile and more prone to species extinctions.

Our study looked at the impacts of a large wildfire in 2012 on one of the many ecological interactions that keep ecosystems healthy – insect pollination. We examined the responses of moths, which are important but often overlooked pollinators, to wildfire by comparing those we caught in burned and neighboring unburned areas.

By collecting, counting, and identifying the thousands of pollen grains they were carrying, we were able to decipher the plant-insect network of interacting species. In this way, it was possible to examine not only the responses of the plants and animals to wildfire but crucially the impacts on pollination processes.

We then used these networks to model the resilience of the ecosystem more generally. We found that burned areas had significantly more abundant flowers (due to a flush of plants whose seeds and roots survived in the soil) but less abundant and species‐rich moths. The total amount of pollen being transported by the moths in burned areas was just 20 percent of that at unburned areas.

Our analysis revealed important differences in the way these species interacted as a result of the wildfire. Although the study was only a snapshot in time, we were able to show that plant-insect communities at burned sites were less able to resist the effects of any further disturbances without suffering species extinctions.

And so as people start rebuilding their homes, livelihoods, and communities in Australia following the devastating bushfires, it is crucial that governments and land managers around the world take sensible decisions that will build resilience into ecosystems. To do this, ecological interaction networks need to be considered, rather than specific species. Cutting-edge network approaches that examine the complex ways in which entire communities of species interact can and should help with this.

Over 45 years ago, the American evolutionary ecologist and conservationist Dan Janzen wrote: “There is a much more insidious kind of extinction: the extinction of ecological interactions.” We should all be concerned not just about the loss of animals, but about the unraveling of species interactions within ecosystems on which we all depend for our survival.

This article is republished from The Conversation by Darren Evans, Reader in Ecology and Conservation, Newcastle University under a Creative Commons license. Read the original article.

Read next: Byte Me #11: The Naked Philanthropist, brofanity, and muff candles