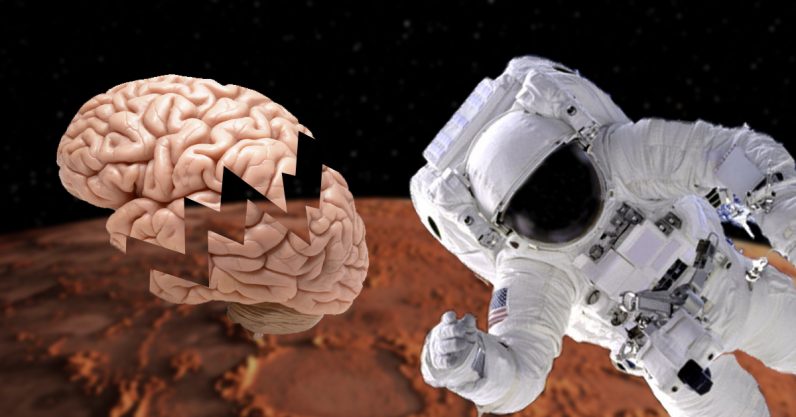 NASA has made a commitment to send humans to Mars by the 2030s. This is an ambitious goal when you think that a typical round trip will last anywhere between three and six months and crews will be expected to stay on the red planet for up to two years before planetary alignment allows for the return journey home. It means that the astronauts have to live in reduced (micro) gravity for about three years – well beyond the current record of 438 continuous days in space held by the Russian cosmonaut Valery Polyakov.

In the early days of space travel, scientists worked hard to figure out how to overcome the force of gravity so that a rocket could catapult free of Earth’s pull in order to land humans on the Moon. Today, gravity remains at the top of the science agenda, but this time we’re more interested in how reduced gravity affects the astronauts’ health – especially their brains. After all, we’ve evolved to exist within Earth’s gravity (1 g), not in the weightlessness of space (0 g) or the microgravity of Mars (0.3 g).

So exactly how does the human brain cope with microgravity? Poorly, in a nutshell – although information about this is limited. This is surprising, since we’re familiar with astronauts’ faces becoming red and bloated during weightlessness – a phenomenon affectionately known as the “Charlie Brown effect,” or “puffy head bird legs syndrome.” This is due to fluid consisting mostly of blood (cells and plasma) and cerebrospinal fluid shifting towards the head, causing them to have round, puffy faces and thinner legs.

These fluid shifts are also associated with space motion sickness, headaches and nausea. They have also, more recently, been linked to blurred vision due to a build-up of pressure as blood flow increases and the brain floats upward inside the skull – a condition called visual impairment and intracranial pressure syndrome. Even though NASA considers this syndrome to be the top health risk for any mission to Mars, figuring out what causes it and – an even tougher question – how to prevent it, still remains a mystery.

So where does my research fit into this? Well, I think that certain parts of the brain end up receiving way too much blood because nitric oxide – an invisible molecule which is usually floating around in the bloodstream – builds up in the bloodstream. This makes the arteries supplying the brain with blood relax so that they open up too much. As a result of this relentless surge in blood flow, the blood-brain barrier – the brain’s “shock absorber” – may become overwhelmed. This allows water to slowly build up (a condition called oedema), causing brain swelling and an increase in pressure that can also be made worse due to limits in its drainage capacity.

Think of it like a river overflowing its banks. The end result is that not enough oxygen gets to parts of the brain fast enough. This a big problem that could explain why blurred vision occurs, as well as effects on other skills including astronauts’ cognitive agility (how they think, concentrate, reason and move).

A trip in the ‘vomit comet’

To work out whether my idea was right, we needed to test it. But rather than ask NASA for a trip to the moon, we escaped the bonds of Earth’s gravity by simulating weightlessness in a special airplane nicknamed the “vomit comet”.

By climbing and then dipping through the air, this plane performs up to 30 of these “parabolas” in a single flight to simulate the feeling of weightlessness. They last only 30 seconds and I must admit, it’s very addictive and you really do get a puffy face!

With all of the equipment securely fastened down, we took measurements from eight volunteers who took a single flight every day for four days. We measured blood flow in different arteries that supply the brain using a portable doppler ultrasound, which works by bouncing high-frequency sound waves off circulating red blood cells. We also measured nitric oxide levels in blood samples taken from the forearm vein, as well as other invisible molecules that included free radicals and brain-specific proteins (which reflect structural damage to the brain) that could tell us if the blood-brain barrier has been forced open.

Our initial findings confirmed what we anticipated. Nitric oxide levels increased following repeated bouts of weightlessness, and this coincided with increased blood flow, particularly through arteries that supply the back of the brain. This forced the blood-brain barrier open, although there was no evidence of structural brain damage.

We’re now planning on following these studies up with more detailed assessments of blood and fluid shifts in the brain using imaging techniques such as magnetic resonance to confirm our findings. We’re also going to explore the effects that countermeasures such as rubber suction trousers – which create a negative pressure in the lower half of the body with the idea that they can help “suck” blood away from the astronaut’s brain – as well as drugs to counteract the increase in nitric oxide. But these findings won’t just improve space travel – they can also provide valuable information as to why the “gravity” of exercise is good medicine for the brain and how it can protect against dementia and stroke in later life.

This article is republished from The Conversation by Damian Bailey, Professor of Physiology and Biochemistry, University of South Wales under a Creative Commons license. Read the original article.