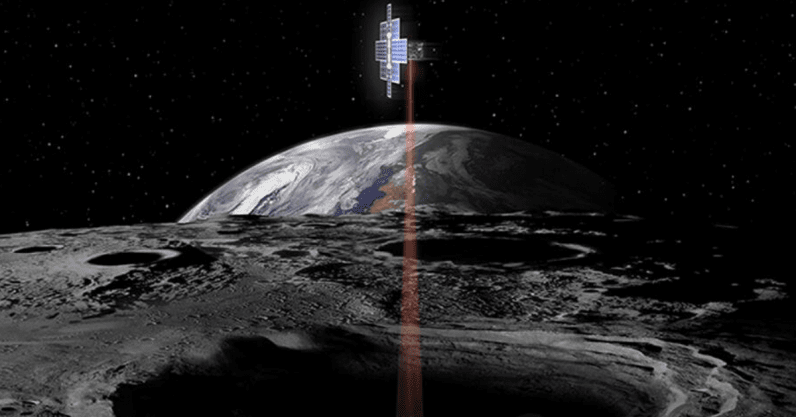 The space race between the US and Russia ended half a century ago when US astronauts became the first to walk on the moon. Today there’s yet another race, prompted by China’s successful landing on the far side of the moon and involving private companies as well as national space agencies, to put humans back on the lunar surface.

But building a moon base and actually living on the moon will require careful planning. First, we need to identify and map available lunar resources, including hydrogen and water ice. Such compounds are crucial if we are to create breathable air and rocket fuel, whether for an observatory or a launchpad to go to the outer planets in our solar system.

But sending missions to map the moon for resources in enough detail to enable future establishments is an expensive undertaking that will take a long time. Luckily, there is a shortcut – tiny satellites called CubeSats.

There are many desirable resources on the moon, from the water ice that can give us fuel and air and other volatile elements to titanium. These may have accumulated in permanently shadowed polar regions, where it is too cold for them to vaporize.

Prior orbital and landed lunar missions have provided us with a broad overview of lunar surface geology. This knowledge has been boosted by returned lunar samples from the Apollo and Luna sample return missions, as well as recovered lunar meteorites.

In fact, that is how we obtained the evidence for lunar water ice in permanently shadowed regions. We have also learned that the lunar surface is composed of variable amounts of ilmenite and related oxide minerals as well as silicate minerals and nanophase iron (material with grain sizes under 100 nanometers), which are all useful for future construction on the moon.

But this knowledge won’t get us far. We also need to know exactly how the substances are distributed and what form they are in. Are they free or bound to something? Are they deep down? How do they interact with the lunar surface? We cannot extract them successfully without knowing such things.

If we are to get to the bottom of these questions, we need new low-cost missions that can be achieved more rapidly compared to traditionally large and expensive projects.

Mini- and micro-satellites, a technology that has matured over the past 40 years to make space science considerably cheaper, have therefore come forward as a great option. In more recent years, we have even started to consider using nanosatellite platforms – such as CubeSats. These are tiny satellites weighing a few tens of kilograms where a standard platform has been developed onto which different instruments can be fitted.

Robotic exploration of the solar system using nano-satellites is attractive because they are cheaper, less risky and have a shorter development schedule compared to traditional science missions. NASA is therefore planning a series of lunar missions using CubeSats including Lunar Flashlight, LunaH-Map and Lunar Ice-Cube, which will all help improve our understanding of the spatial distribution of water ice in lunar cold traps. However, the spatial resolution of the observations of these missions isn’t great – on the order of one to many kilometers.

Given that future lunar landers or rovers destined for permanently shadowed regions will likely have limited mobility, there is a need to improve the spatial accuracy of maps of water ice. I work on another CubeSat mission called the Volatile & Mineralogy Mapping Orbiter (VMMO) funded by the European Space Agency, which will be able to achieve this using laser technology.

VMMO aims to address several key aspects of future lunar exploration. Adopting “12U CubeSat design”, which has the dimensions 120x10x10cm, it will map the location of relevant resources and volatile substances in sufficient quantities to be operationally useful for future lunar settlers to make fuel and breathable air. Its primary science payload is a miniaturized laser instrument that would probe the Shackleton Crater, adjacent to the South Pole, for measuring the abundance of water ice.

Specifically, the instrument uses a lidar, a surveying method that can image an object by illuminating it with laser light and measuring the reflected light with a sensor. Scanning a ten meters wide path, the instrument would take around 260 days to build a high-resolution map of water ice inside the 20 kilometer-diameter crater in this way.

It will also map lunar resources such as ilmenite (TiFeO3) as it flies over sunlit regions, as well as monitoring the distribution of ice and other substances across darkened areas. This will help us understand how condensates migrate across the surface during the two-week lunar night.

The VMMO mission is due to be launched in 2023. If all goes well, it will help pave the path for European lunar exploration heading towards a moon village and commercial exploitation in the 2030-2040 timeframe.

This article is republished from The Conversation by Yang Gao, Associate Dean (International), Professor of Space Autonomous Systems, University of Surrey under a Creative Commons license. Read the original article.

Read next: We watched almost 13 billion hours of live streams in 2019