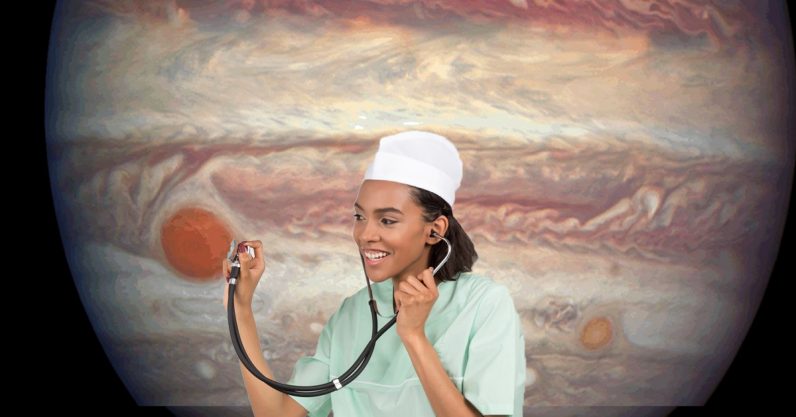 In the last 10 years, but in the last five months in particular, the press has reported dire warnings that the Great Red Spot of Jupiter is dying. However, some astronomers believe, to paraphrase Mark Twain, that the reports of its death are greatly exaggerated, or at least premature.

Robert Hooke, an early British physicist who discovered cells, first described the Great Red Spot in 1665. In 1979, when two Voyager spacecraft flew close by Jupiter, images showed that the spot was a red cloud that rotated as part of a huge vortex several times larger than the Earth.

Concerns for the Great Red Spot’s “health” arose when astronomers realized that the cloud’s area in 1979 was only half of its size in the 1800s, as determined from old photographic plates. Recent images showed more cloud shrinkage, leading to headlines that the spot could die within 20 years. In spring 2019, astronomers reported that it was “unraveling,” and shedding large “blades” and “flakes” of red clouds.

I have been intrigued by the Great Red Spot since 1979 when I viewed the Voyager images only days after NASA processed them. The beautiful structure of this extraordinary atmospheric intrigued me since my career was evolving from astrophysics to fluid dynamics – the study of how liquids and gases move. What better way to begin exploring the fundamental physics and math of fluid dynamics than to study the Great Red Spot?

I believe that the Great Red Spot is in no danger of disappearing. By analyzing the cloud images with computer models that incorporate the physics of how fluids move, my research group at Berkeley was able to determine the area of the spot. We discovered that the area of the spot cloud is larger than its underlying vortex, the swirling gas that defines it. The question then becomes: Does a decrease in the area of the cloud mean that the vortex itself is shrinking?

It is difficult to determine the relationship between the cloud’s size and the vortex’s size or even how Jovian clouds form and dissipate. Therefore, to understand the health of the spot, planetary scientists need to study the health of its vortex and not its cloud; the cloud’s shrinkage is not a harbinger of death. Based on the spot’s interactions with other vortices my Berkeley group found there is no evidence that that vortex itself has changed its size or intensity.

Jupiter’s atmosphere contains vortices besides the Great Red Spot, some of which are useful for monitoring its health. Some, like this spot, are anticyclones that rotate in the opposite direction of the planet’s spin; others are cyclones that rotate in the same direction as the planet’s spin. Anticyclones appear as bright clouds and so are easily detectable, but cyclones (except at the poles) often have filamentary clouds or no clouds at all.

How do we know that Jovian cyclones exist when clouds are not visible? For more than a century astronomers documented the motions of cloud-covered anticyclones as they slowly drifted across Jupiter. Changes in their speeds were often abrupt and seemed to occur for no reason. However, by assuming that these observable vortices interact with cloud-free (and unobservable) cyclones, we can explain the abrupt changes.

Anticyclones merge with each other. However, anticyclones repel cyclones. In spring 2019, when the “flaking” was observed, the Great Red Spot was also observed to merge with a series of small clouds (likely small anticyclones) on its northwest side. Such mergers are common; Voyager 1 first observed these and they have subsequently been observed every few months. Typically, small anticyclones are not “digested” immediately, but produce lumps on the spot’s boundary that orbit around it, slowly migrating into the center.

I believe that the shedding of clouds from the spot as “flakes” and “blades” observed in 2019 was due to two simultaneous events: undigested lumps of merged anticyclones traveling along the spot’s boundary and a close encounter with one or more “unobservable” cyclones.

When a large anticyclone and smaller cyclone approach each other before repelling, they create a “stagnation” point near the boundary of the anticyclone wheree the local winds abruptly change direction, going off approximately perpendicular to their original directions. Think of two fire hoses aimed at each other so that their streams of water collide – the streams momentarily halt at the point of impact (the stagnation point) and then scatter outward. Any cloud or undigested lump on the spot that encounters a stagnation point will similarly shatter and flake away in opposite directions.

The numerical calculations of my Berkeley research group show that the recent observations of cloud shedding can be explained by the collision of undigested red clouds at the edge of the Great Red Spot with stagnation points produced during a close encounter with a cyclone.

Pieces of the red cloud scatter outward from the stagnation point, appearing as flakes and blades. Neither the mergers that created the lumps nor the close encounters with cyclones are unusual by themselves, but it is not that common for them to occur at the same time. However, neither event is a sign of ill health for the Great Red Spot. My colleagues and I believe it will survive for many more years.

This article is republished from The Conversation by Philip Marcus, Professor of Mechanical Engineering, University of California, Berkeley under a Creative Commons license. Read the original article.

Read next: Get Parallels Desktop and 12 other premium Mac apps on sale during this Cyber Monday