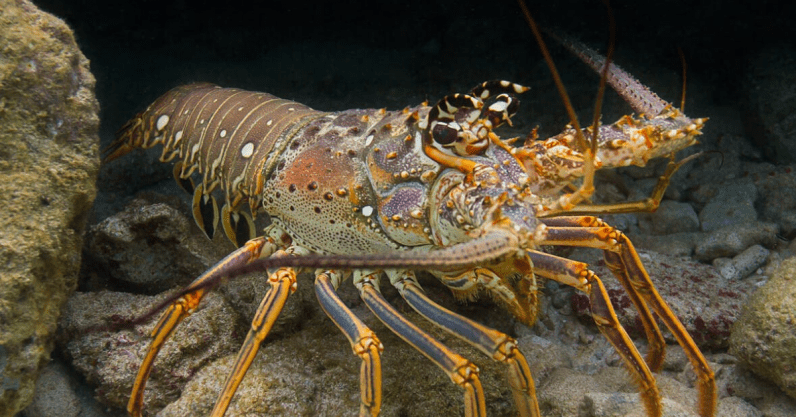 Alongside overfishing, it is the biggest danger spiny lobsters are facing today. This is important because the species plays a vital role as both predator and prey in Caribbean seagrass and reef ecosystems. The annual catch of about 40,000 tonnes supports local fisheries and provides a food source for people across the world.

The virus replaces blood cells, eventually turning infected lobsters’ blood (referred to as haemolymph) milky white, leaving the disease visible to the human eye through their translucent abdomens. Once this happens, it’s usually not long before the lobster dies.

The virus is contagious and can be transmitted through direct contact, ingestion of diseased tissue via cannibalism and through water. This is worrying as spiny lobsters tend to hang out in groups.

Research efforts – including my own – have been trying to uncover more about the disease, which was only discovered in 1999. We already know that clinically diseased lobsters are generally smaller than healthy ones – but colleagues and I wondered if this might be related to their choice of habitat.

Depending on its life stage, a spiny lobster lives in different habitats. Larvae float in open oceanic waters, while postlarvae and small juveniles like shallow, vegetated habitats where they can hide from predators. When they outgrow the protection afforded by the vegetation, they seek structured shelters such as rocks and crevices around the seagrass meadows. Finally, on the cusp of adulthood they start migrating to coral reefs.

In a recent study with colleagues at the National Autonomous University of Mexico’s Reef Systems Unit in the Caribbean, we surveyed three very different habitat types – a shallow, sparsely vegetated area, an algae and seagrass meadow, and a coral reef. We found that significantly more lobsters with PaV1 lived in the highly vegetated seagrass meadow.

It’s not yet clear why the seagrass habitat is a disease hot-spot. While further research is needed, it could be that seagrass is an environment in which the virus naturally reproduces, or that the habitat prevents the virus from escaping. Recent research elsewhere has shown that coastal seagrass meadows can trap some pathogens, greatly reducing the number that reach the open ocean and benefiting humans and marine life. In our case, it would be the coral reefs that are more pathogen-free, and the adult lobsters that reap the benefits.

But the spiny lobster isn’t helpless to avoid this deadly disease. While undertaking surveys a few years ago, scientists in Florida noticed that healthy lobsters avoided sharing shelters with individuals infected with Pav1 – an unusual behaviour for this usually sociable species.

How they do this is fascinating. Lobster sensory organs are very different to ours – instead of using human-like eyes, nose and ears to help them go about their daily business, they flick their antennae to detect chemicals in the water. Lobsters suffering from PaV1 release chemicals unique to the virus, but symptomless carriers don’t. It therefore seems that the healthy lobsters are able to “sniff” out the disease and can avoid sick lobsters and boost their chances of survival.

From our study it seems that lobsters in seagrass habitats that are unable to avoid becoming diseased are much less likely to live long enough to migrate into the reef habitats where larger lobsters live. In terms of species health this can be seen as a positive, as the diseased population becomes isolated, while the best sniffers make it out onto the reefs to live and breed – natural selection in action.

The other side of the coin is that, overall, less lobsters are making it out to the reefs in the presence of the disease. This isn’t ideal for fishermen who rely on spiny lobsters migrating to the reef and reaching a size worth catching to make a living.

What’s more, even those that do reach adulthood are becoming harder to catch. In much of the Caribbean, fishermen use “casitas” to trap lobsters. Spanish for “little house”, these artificial shelters mimic those that juvenile lobsters live in when in seagrass habitats. Lobsters normally gather under these shelters and fishermen dive down and pick them up, or hook them. But we now know that if a diseased lobster is under a casita, other, healthy lobsters won’t enter as readily – meaning a reduced catch. For numerous small fishing cooperatives across the Caribbean, this could be devastating.

Much still remains to be answered about how Pav1 and lobsters’ response to it will affect the health of the species and the fishing and tourism industries that rely on it. Our research on these questions continues, so watch this space.

This article is republished from The Conversation by Charlotte Eve Davies, Postdoctoral Researcher, Swansea University under a Creative Commons license. Read the original article.

Read next: Just putting it out there: Fuck dark mode