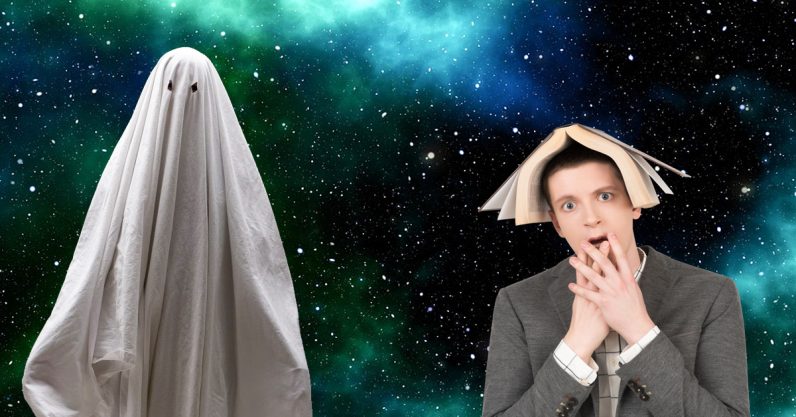 It’s a classic Halloween tale. A group of ghost hunters visit a grand old house that is rumoured to be haunted. But after thoroughly exploring, they leave disappointed: there are no ghosts to be seen. Only later, when looking through their photographs of the place do they notice the mysterious apparition on the stairs. It was there all the time.

In our new work, published in Nature, we were shocked to discover an apparition of galactic proportions when looking at a familiar galaxy. The finding has huge significance because it demonstrates how chemical elements mix on very large scales around galaxies.

Your body, the Earth, and all the material world around you is made of a class of particle called “baryons.” Baryonic matter is “normal” everyday matter, such as carbon. So we’re intimately connected to the stuff.

Imagine you could put all the baryons in the universe into a jar. Now pick one of those particles at random. Where do you think it would have come from? Another human? A planet? Another galaxy entirely? The answer is surprising to most: it’s likely that baryon would have come from the space between galaxies. Most of the normal matter in the universe isn’t contained within galaxies at all.

When the universe was just a few hundred thousand years old, baryonic matter and dark matter, an invisible and unknown substance making up the majority of matter in the universe, were intermingled in a nearly uniform fog. This was rippled with small density fluctuations, and over time these were amplified by gravity which teased them into a network of filaments lacing through the universe.

We call it the cosmic web. At the densest points of the web, galaxies formed. In those galaxies, about a few hundred million years after the Big Bang, hydrogen started to burn in stars and nuclear fusion forged heavy elements including carbon and oxygen. Other elements were formed in cataclysmic stellar explosions. And at the centres of the galaxies, supermassive black holes grew by accumulating baryons, releasing energy in the process.

The blaze of young stars, the explosions of supernovae and the intensity of black holes have an important effect: they drive flows of gas through and out of galaxies. We’ve known for a long time that this “feedback” is essential for regulating the growth of galaxies and for mixing the different chemical elements in regions between stars. Without such mixing, you wouldn’t exist. Some of the iron in your blood comes from supernovae and the carbon comes from the ash of long-dead stars. We are all what the baddies in Harry Potter may call cosmic “mudbloods.”

These winds transport heavy elements formed in galaxies out into the CGM. Some of these elements will later “rain” back down, perhaps to be incorporated in new solar systems. Others will spend the rest of eternity exiled in intergalactic space.

Computer simulations show this process in beautiful detail. But while we can measure outflows around galaxies in the real universe, we have not directly observed them on very large scales, which stretch hundreds of thousands of light-years around galaxies. Until now.

We have used an instrument called the Keck Cosmic Web Imager to observe a galaxy that is part of a sample of galaxies we have been studying for some time. The instrument, based in Hawaii, is no ordinary camera. It measures the spectrum of light collected by the telescope, dispersing the light into its different frequencies, or colours. This allows us to see much more than would otherwise be possible with a traditional imaging camera.

The galaxies were of interest us because they are known to be driving extremely fast outflows of gas, traveling at 1,000 kilometers per second or more. They are also extremely compact compared to most galaxies. We think that most of them formed from the collision of two galaxies that have now coalesced into one.

There’s nothing paranormal going on here though. From the color or frequency, of the light, we know it is being emitted by oxygen ions. Our analysis shows that the nebula has formed as the result of two distinct gas outflows – winds – that have propagated from the central galaxy into the CGM. We call the nebula Makani – a Hawaiian word for wind – out of respect for the cultural significance of the mountain from which the observations were made.

In Makani we are seeing directly for the first time the mechanism by which the CGM is being heated and enriched. Our initial analysis shows that the properties of the outflow broadly agree with predictions from theory. We now have the ideal system to study the process, and can use this data to refine the models.

What’s needed now is more examples of objects like Makani. And like the investigators we are, our team is now on the hunt for other spectres lurking out there.