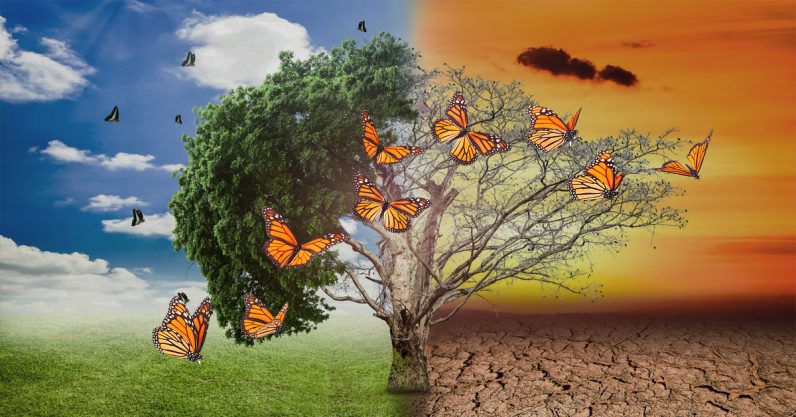 Butterflies are rather like Goldilocks, preferring conditions to be neither too hot nor too cold, but “just right.” Under climate change, the temperature at any given time of summer is, on average, getting warmer, leaving butterflies (and their nocturnal cousins, the moths) with the challenge of how to remain in their optimal temperature window.

One of the main ways in which species are achieving this is by changing the time of year at which they are active. Scientists refer to the timing of such lifecycle events as “phenology,” so when an animal or plant starts to do things earlier in the year it is said to be “advancing its phenology.”

These advances have been observed already in a wide range of butterflies and moths – indeed, most species are advancing their phenology to some extent. In Britain, as the average spring temperature has increased by roughly 0.5°C over the past 20 years, species have advanced by between three days and a week on average, to keep track of cooler temperatures.

Is this a sign that butterflies and moths are well equipped to cope with climate change, and readily adjust to new temperatures? Or are these populations under stress, being dragged along unwillingly by unnaturally fast changes?

In a new study published in Nature Communications, colleagues and I sought to answer this question. We first pulled together data from millions of records submitted by butterfly and moth enthusiasts to one of four recording schemes run by charities or research institutes. This gave us information on 130 species of butterflies and moths in Great Britain every year for a 20-year period between 1995 and 2014. We could then estimate the abundance and distribution of each species across this time, along with how far north they had moved. The data also, crucially, allowed us to estimate subtle changes in what time of the year each species was emerging from the chrysalis as a fully-grown butterfly.

It pays to reproduce quickly

Analyzing the trends in each variable, we discovered that species with more flexible lifecycles were more likely to be able to benefit from an earlier emergence driven by climate change. Some species are able to go from caterpillar to butterfly twice or more per year, so that the individual butterflies you see flying in the spring are the grandchildren or great-grandchildren of the individuals seen a year previously.

Among these species, we observed that those which have been advancing their phenology the most over the 20-year study period also had the most positive trends in abundance, distribution and northwards extent. For these species – such as Britain’s tiniest butterfly, the dainty small blue – emerging early in spring gives more time for their later-summer generations to complete their reproductive cycles before the arrival of autumn, allowing more population growth to occur.

Other species, however, are less flexible and restricted to a single reproductive cycle per year. For these species, we found no evidence of any benefit to emerging earlier. Indeed, worryingly, we found that the species in this group that specialize in one very specific habitat type (often related to the caterpillar’s preferred diet) actually tended to most harmed by advancing phenology.

The beautiful high brown fritillary, often described as Britain’s most endangered butterfly, fits this category perfectly. It is found only alongside the dog-violets that its caterpillar eats, in coppiced woodland and limestone pavement habitats. It’s also a single-generation butterfly that has advanced its phenology. This suggests that climate change, while undoubtedly not the sole cause, might have played a part in the downfall of this species.

All is not lost, however. Many of Britain’s single-generation species show the capacity, in continental Europe, to add a second generation in years that are sufficiently warm. Therefore, as the climate continues to warm, species like the silver-studded blue might be able to switch to multiple generations in the UK as well, and thereby begin to extract benefits from the additional warmth, potentially leading to population increases.

Specialists are at risk

More immediately, we can arm ourselves with this knowledge to spot the warning signs of species that may be most at risk. Clearly the single-generation habitat specialists are of particular concern, as many are already endangered or vulnerable – not just the high brown fritillary and silver-studded blue, but also species such as pearl-bordered fritillary, grizzled skipper and the particularly sought-after white admiral of southern England. Multi-generation species that are failing to advance their phenology might also be threatened: into this category falls another of Britain’s most sharply-declining butterflies: the wall brown.

Using this knowledge to help protect moths and butterflies from climate change is not simply important for the sake of the butterflies and moths themselves – these species also play a number of important roles in our ecosystems. Their caterpillars consume vast quantities of plant material, and in turn act as prey for birds, bats, and other small mammals, while moths even act as pollinators of a surprisingly wide range of plant species, possibly including some important crops.

According to Butterfly Conservation, around two-thirds of butterfly species have declined in the UK over the past 40 years. If this trend continues, it might have unpredictable knock-on effects on other species in the ecosystem. Only by arming ourselves with an understanding of why butterfly numbers are down can we hope to halt or reverse the decline.

This article is republished from The Conversation by Callum Macgregor, Postdoctoral Research Associate, University of York under a Creative Commons license. Read the original article.

Read next: CHEAP: Use the $21 you saved on a yearly PlayStation Plus membership to eat tacos