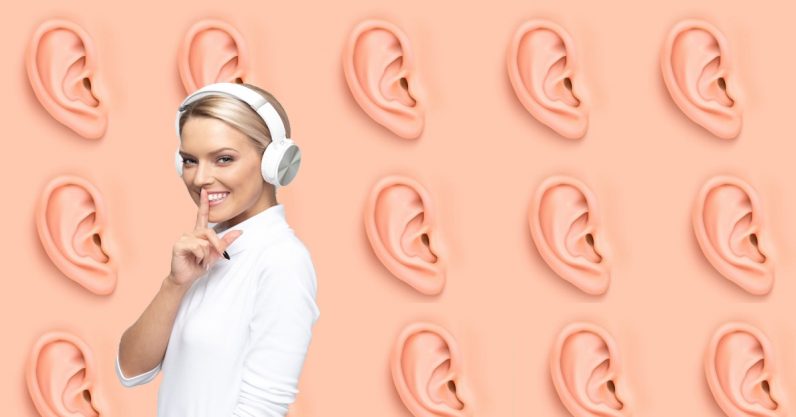 Is this thing on?

Sex blogger, Girl on the Net (GOTN) says that she has noticed a definite rise in the popularity of audio content.

Co-founder of Bijoux Indiscrets and designer of the Orgasm Library, Elsa Viegas, commented that “sexual pleasure is very important for our health both physical and emotional and recording it is kind of a statement of it all. The Orgasm Library shows that we don’t sound the same because we are not the same and we don’t feel the same way. It shows how diverse real sound is.”

Next to pleasure as a priority in this process, Viegas points out the importance of anonymity. For example, the Orgasm Library, where (mostly) women upload clips of their orgasm sound and it transforms the audio file into a visual people feel more comfortable sharing this moment without “our names and photo next to our orgasm audios,” she says. Not only does non-visual anonymity add a level of safety to the person recording the sound, but resist censorship targeting.

Power of the imagination

Yet, not all adult audio content is purely female-focused. Sensory deprivation is just one of the ways that anyone can try to experience a sensually heightened sexual state. Cutting off your sense of sight particularly sharpens the other senses, for example.

IMH equates the nostalgic power of audio-sensory triggers to “smelling that fresh baking or that summer rain” that can transport you to a memory or place. “Deep growls, a slap, or the sound of a belt buckle coming undone, these directly translate to our imagination, which is infinitely more detailed than any visual marker. Our imagination is deeply more complex and nuanced and detailed.”

“There’s definitely money to be made,” says GOTN, “but whether that money actually reaches the performers and producers is another matter.”

Back in February, Dipsea announced $5.5million in seed funding for the “first audio platform for sexual wellness”, a hub for sexy audio clips. It charges $3.99 for an annual subscription, with the hope that having an app will help it reach a wider audience.

For other independent creators such as GOTN, IMH and Quinn Rhodes they’re directly raising money from fans via their Patreon pages, which they say makes up part of their main income.

IMH adds, “if there is more of a monetary return, more can be done and explored, and I hope to do that one day”. “For those who do want to monetize our efforts, we only seek a nominal appreciation for the vast amount of time and effort we put into doing our audios, and the creativity and talent we share with everyone else.”

SEXTECHGUIDE previously reported on Patreon’s hostility toward adult creators, which resulted in many being ejected from the site. Just as iOS and Android have a hot-and-cold relationship with adult content, Patreon states that “once your page is marked as adult content, your page won’t be listed on our site,” despite regularly providing an income for adult creators.

“All types of pornographic content are within the scope of the legislation. The legislation does not exclude audio or text from its definition of pornography. All providers of commercial online pornography to persons in the UK are required to comply with the age-verification requirement.”

IMH believes that there is “a mutual appreciation between the two parties – the listener and the creator – to show support for what they do, and this, in turn, encourages the creator to do more. Be more scheduled, come up with more scenarios, and make more content.”

Sextech to the rescue

Kiiroo’s Feel Connect app allows you connect teledildonic devices to visual content and OhMiBod’s app has a “Club Mode” function, that lets you control vibrations with music, the sound of someone’s voice, or even their moans.

The collaborative possibilities of audio porn and sextech are vast. Fuck Me in the Ear is already creating a 360-degree 3D audio experience, with mics surrounding the bed. He hopes this will ultimately end up “in a games engine, and then output that to 3D audio headphones such as the new Bose AR glasses to create a sense of immersive audio, fixed in its source direction as you turn your head.” Dick tells us that in the future, they want to have an immersive installation booth that invites multiple people in at a time combined with evocative objects to provide tactile stimulation along with the sounds.

Read next: Sonos now offers 30 percent off new products for recycling some old ones