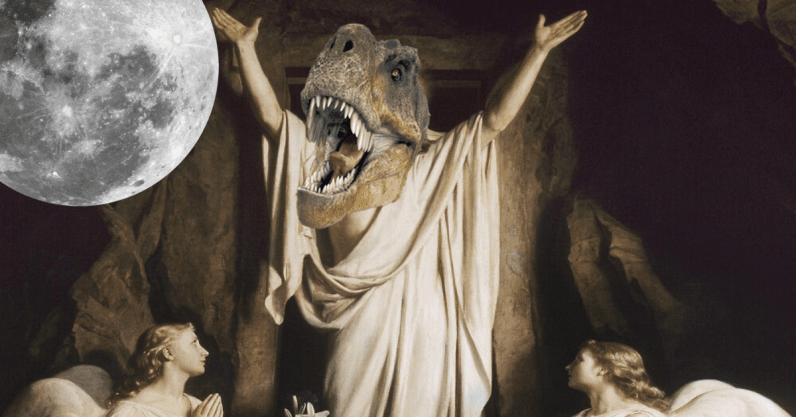 Life is the last thing you would associate with the eternally dark craters of the lunar poles. But these craters could hold the key to explaining how complex, multi-cellular organisms evolved on Earth hundreds of millions of years ago, affording unimaginable insights into our planet’s biological past.

That’s because huge asteroid impacts, such as the one believed to have killed the dinosaurs, happen frequently and launch thousands of tons of the Earth’s material into space – bacteria, worms, and all. Some of this has ended up on the moon and may have survived intact in craters. Sadly, though, if we push ahead with current moon exploration plans, we may end up destroying them.

On Earth, DNA rarely, if ever, survives much longer than a million years. In principle, however, DNA kept at a few degrees above absolute zero and protected from harmful ionizing radiation could survive indefinitely.

Life permeates the entire crust of the Earth. As the Deep Carbon Observatory project has shown, even rocks ejected from kilometers underground would carry complex microbial communities and animals like nematodes into space.

Any living matter that reached space after an impact would be freeze-dried immediately, with its DNA preserved. When ejected at around 11 kilometers per second, terrestrial rocks would linger in an appropriate orbit before being captured by the moon. Scientists have calculated that a typical 100 square kilometers of the moon likely contains up to 28,000 kilograms of terrestrial material.

Researchers examining the material returned from the Apollo missions have confirmed predictions that terrestrial, biological molecules are indeed present, albeit faintly. This is the case even for rock samples exposed to brutal and unprotected day and night cycles. These cycles involve two-week periods of constant, unfiltered solar radiation which can destroy biomolecules. Remarkably, new research also shows that Apollo appears to have returned at least one rock that is actually a meteorite from Earth.

The most likely locations to find well-preserved DNA from Earth would be the craters at the lunar poles that maintain eternal darkness. The Shackleton crater at the south pole has existed for over three billion years, a period of time covering the vast majority of Earth’s living history. Shielded from the sun’s intense radiation, it could have captured biological samples from every major asteroid impact in Earth’s history. And its cold, shadowed interior would act like a preservation chamber.

But simply being kept in the dark does not guarantee the survival of genetic material. Though protected from direct solar radiation, the samples would still be exposed to harmful cosmic radiation from the galaxy which could easily destroy molecules such as DNA. Genetic material sufficiently embedded within or under boulders or lava flows, however, might have a chance of being protected.

It would be worth finding out. Any DNA preserved in the lunar poles would be of incalculable value for understanding the true history of Earth’s life. For instance, the Chicxulub impact (thought to have caused the last mass extinction which killed the dinosaurs) was recent enough that any genetic material ejected by it would provide an important snapshot of what species were alive then.

Less likely, we might also identify candidate precursor organisms to current life forms on Earth – helping us to trace evolution. And there may be an exceptionally remote chance that sufficiently protected DNA samples of vertebrates, such as dinosaurs, could provide a blueprint for resurrecting the extinct species (a la Jurassic Park).

In contrast, the Sudbury impact, dating to 1.85 billion years ago, ejected rocks containing DNA of early prokaryotes like bacteria. These preceded the development of eukaryotes, which have more complex cellular structures. Sequencing DNA obtained in craters like Shackleton could therefore provide direct genetic information needed to help understand how complex eukaryotes first evolved hundreds of millions of years ago.

Right now, our understanding of ancestral organisms mostly comes from comparing the DNA sequences of species currently alive. For example, if you want to understand what the common ancestor of humans and other great apes was like, you can compare the genomes of currently living species, and guess the identity of many DNA sequences from our common ancestor 5-10m years ago. When combined with hominid DNA sequences from archaeological sites dating to a few hundred thousand years ago, these approaches have spectacularly contributed to understanding human origins, revealing for instance that hominids interbred frequently.

But ultimately, reconstructions of far more ancient common ancestors must always remain an educated guess if we only rely on DNA evidence from Earth. This is certainly the case if you are asking about common ancestors of plants and animals which likely lived more than 500m years ago. Comparative approaches are also limited in their insights into the functional metabolism of the first photosynthesizing prokaryotes alive two billion years ago. With any luck, the lunar poles may hold DNA samples that could answer these profound questions.

Given the stakes, it is clear that sites containing potential samples must be protected. Worryingly for scientists like me, who would like to analyze such irreplaceable material, current plans for lunar exploration may be a threat to this.

Many companies and space agencies are looking to create a moon base in the next few years, which would most likely involve mining the craters of the lunar poles for frozen water deposits.

Even valid scientific research that risks contamination, such as the deliberate crashing of spacecraft into these craters, poses a risk. So do planned rovers, which are intended to explore the lunar poles and might contaminate these areas.

For these reasons, current flagship missions to the lunar poles should be undertaken only after humanity has established whether these craters might hold an unexpected – and invaluable – paleogenetic legacy.

This article is republished from The Conversation by Duncan T Odom, Director of Research in Evolution and Cancer, University of Cambridge under a Creative Commons license. Read the original article.

Read next: Hideo Kojima’s games rely on sexist tropes — and Death Stranding will probably be no different